Yet again the bream have got the better of me over my latest trip, lots of line bites on the first night’s session but no fish.  Following that I was hopeful for the second night and laid out the food on the table ready for the bream’s appearance, but I should have known better – not a touch.  After all the years I have fished for bream and the fantastic catches I’ve been fortunate to make at times, you would think I would know what was happening on a 100 acre bream water but the truth is far from that.  Even today they are still as mysterious as they were in those far off days on Tring, TC and Queenford but that’s what I love about fishing.  Once the result has become predictable it loses interest and it would be time to move on to another species or water. 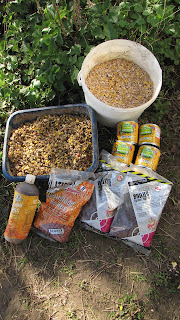 I had made a back burner plan to leave the bream venue and travel on to a good perch water that had come to my attention, with the weather as it was I had some doubts, but in the end I decided to go.  Temperatures up to around 70C were ok but bright sunny and a completely clear sky was not what I really wanted but I had no other plans so I’ll make do.  My thought was that I would be waiting until the evening and fading light levels before the perch would be interested in feeding so I packed up the bream tackle in a very leisurely manner, then travelled on to the new venue in a sedately fashion that would allow push bikes to go past me.  I stopped off at a Tesco’s store and got a small box of prawns to give yet another line of attack, I knew that the small silver fish could be a major problem on this water.  With this in mind I had also ordered up a packet of 100 assorted firetail worms along with the appropriate jig hooks, at least these would not be bothered by the small silver fish and I had good reason to believe they could work well for perch.  Along with red maggots to catch live bait, and lobworms to try in case the little blighters left me alone for a while, I was set for an interesting session. 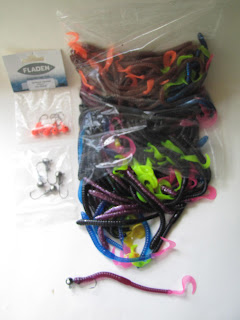 With all my mucking about I finally arrived at the venue just after mid-day, still way too early but at least I would have the stall set out ready for when the time came.  The first order of the day was to catch live bait, the only problem being getting bait small enough for my wishes.  The first cast produced a rudd of about 6oz and whilst a perch of the size I was after could take that quite easily, I wanted a smaller fish that would give fewer problems on the paternoster rig I would be using.  The second cast with the double red maggots on a size 18 Carbon Chub hook produced a bite almost immediately and on the strike I knew I hooked a carp as it tore across the lake taking line against the light clutch setting I was using just for this event.  Considering the light hook length being used I played the fish back quite strongly, if it broke me I could just retie another hook and I did not really want to land a carp anyway.  It slowly came back into the swim and then went back and forth in front of me keeping low in the water.  I tried to get it up from the bottom just to see the fish, but it resisted and it was some moments before I saw the stripes of a big perch – I played it just a bit more carefully after that!


A carp angler had come up from his swim to see what I had and his comment of ‘that’s a big perch’ had done nothing to settle my nerves over those last few moments, but it slipped into the landing net and was safely mine to admire.  The water has a tinge of colour so typical of carp lakes, but even so the stripes were quite bold and big perch make some of the most photogenic shots of all the coarse species.  At 3lb-7oz it was heading the right direction from the specimen caught last week.  Being as fat a pig I knew my time was limited to catch the 4lb fish I was after, once they spawn it is so much harder to achieve the target so extra effort is on the cards. 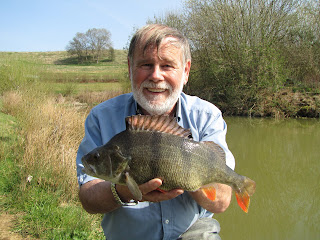 The middle of the day with that strong, bright sun shining down and the perch was willing to feed, what do we know?  I spent the rest of the afternoon using tactics designed to catch the fish and they ignored them all, even the low light of evening did not impress them.  Over the last forty years or more I’ve written thousands of words and features on our sport, the problem as I see it, is that the fish don’t read and so don’t know how they are supposed to behave – great, and long may it remain that way.  I’ll be back again next week to try again.
Posted by Travelling Man at Friday, March 30, 2012