A double figure tench at last.

I almost did not go, the fishing has been poor and I needed a lift but then I saw that the lads on Linear were catching tench and I thought ’if they can do it there, then I can on the new water I had sorted out.’  Van packed and Thursday morning saw me set out on the 100 odd mile journey to the venue in the Colne Valley.


The lake is comparatively small at about 4acres, but there are reports of double figure tench and a very large bream or two, well worth an effort.  The venue is a gravel pit and as with most pits there would be bars and clear areas where the weed would not be quite as bad, fortunately a regular visitor to the venue indicated one of these areas off a swim on the opposite bank.  With a marker rod I soon had it located and had bait sailing out the 40 yards to its position in quick order.  The Canadian pond weed was just growing, and that at the edge of the lake it was about a foot tall.  Out where I was putting bait it was clear, and the gravel could be felt through the braid as I dragged the lead over the bottom.  A method mix base was used to carry pellets, sweetcorn, casters and 10mm Source boilies, the whole lot in a mix that was put out with the Spomb, perfect and no dropped particle.  One of the rods would be fished with a conventional running swim feeder and a short hooklink carrying an artificial maggot along with two or three natural maggots.  The other rig was one I had recently seen in a magazine, a small hook had been first tied on the end of the line then a grain of buoyant artificial corn was put on next to it. Then a hook was tied using a knotless knot as usual.  As shown in the photo I could then use natural maggots on the small hook and slide the corn down onto it.  Again this rig was used on a short hook length and with a running swim feeder system. 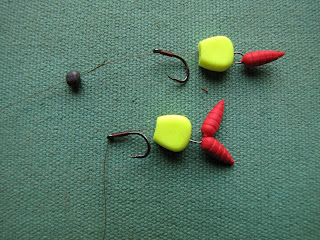 The successful rig with artificial maggots to indicate the rig.

The Spomb had been clipped up at the right distance and I laid it out along the footpath behind my swim.  Then it was a simple matter to lay the feeder rods alongside it and once at the correct distance come back and put a bit of magic marker thread onto the main line just in front of the tip so I could get the correct spot every time.


Fish could be seen topping at regular intervals which made a nice change, most of the waters I had been on lately had little action overall.  They might have shown themselves here but no action had occurred before dark or even through the dark hours.  The alarm was set for 4:30am and once up I refreshed the baits and loaded the feeders with maggots, then I Spombed out more feed in the form of hemp and maggots with the thought that the falling bait might attract fish into the swim.  Hours passed and still nothing occurred, I kept recasting at regular intervals then at last the indicator rose and I was into a hard fishing fish.  A good scrap later I weight in my best tench of the season so far at 7lb-5oz, a very dark fish and quite thin suggesting she had not been feeding too much and could well put on weight over the coming weeks. 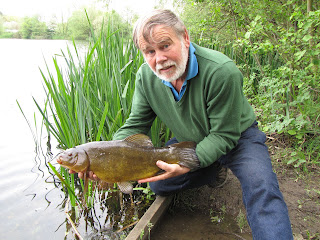 I was now hopeful of another fish but it was not until just before dark the bobbin rose again and I hit into a slowly moving but heavy fish, I wondered what I had hooked and thought that maybe it was that big bream of about 17lb that had been mentioned so it was quite exciting as it slowly came to the bank.  When I saw it was a big tench that excitement rose even higher and as always I began to wonder about the hook hold, but I need not have worried as she slipped into the waiting landing net.  This fish was obviously fit, not fat just well proportioned and the scales showed up a magnificent 10lb-5oz a brilliant start to the tench fishing to come.  Just as a matter of interest both fish fell to the corn rig and I’ll be using this with more confidence in the near future. 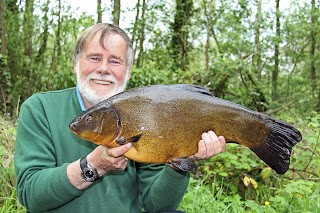