The weather experienced in England must be close to unique in the range and speed of change we get.  It seems just days ago I was freezing in a easterly wind whilst tench fishing, ice would cover the landing mat by the end of the day, but now I needed my factor 25 sun cream and sweated my nether regions off in the sweltering heat of 29C.  I had thought that this ‘improvement’ in the weather would bode well for both the proposed tench and crucian trips I had in mind, wrong again!


With the success of a double figure tench last week it seemed an obvious choice to return and try again, so Tuesday morning saw me heading back down the M40 to the Colne Valley gravel pit that was the scene of that success.  I must admit to being a little bit excited since this improvement in the weather should improve the sport.  Last week I had sat with an easterly wind blowing into my camp, and although it was not the coldest of days over the last few weeks it did require extra clothing to keep warm.  The fish had given a good surface display as to their numbers present in the lake and now I thought it was guaranteed I would catch, I should have learned by now that fishing does not work that way.


Terry Lampard along with myself and another friend sat for the next 48 hours without a touch from a tench.  The odd tench showed on the surface but it was one or two a day at most, they had just gone into hibernation mode.  While that was true for the tench it not apply to carp and they drifted around on the surface without a care in the world.  It just did not make sense, but phone calls to other contacts on different venues suggested the same story all over the place, carp maybe spawning or at least near to the act, but the tench were very quiet.  I had given a try to the eels known to be present, some of them to a good size but although I caught two they were both under 2lb, maybe better luck next time.  Fortunately throughout the two days at this water I was camped in the shade of a quite large tree, but I feared the worse on my next venue Marsh Farm, very few trees there to give shade and temperatures forecasted to near 30C.


I had arranged to meet John Found at Marsh around the 1:00pm sort of time and in fact we pulled into the car park just moments apart.  There was no hurry to begin and we had a chat to catch up then went into the onsite tackle shop and passed some more time getting all the latest gen on events.  It seems that one angler had a very nice catch of crucian off Johnson’s Lake, this is for full members of Godalming A.S. and it is positioned just to the far side of the day ticket waters.  With 18 fish over 3lb and fish of 4lb-2oz, 4lb-3oz and 4lb-5oz caught over a 48hr session it makes my mouth water at the future potential.


With the guest ticket sorted out which gives me the chance to fish at night, we made our way around the lake finally settling with the light breeze coming into our chosen swims.  Hopefully this would move the fish down to us, but at the very least it cooled the strong sun effects down a little.  As previously mentioned I float fish here even though I know that method feeder tactics could produce more fish.  I spend so much time behind rods stuck on the rod-rests that it makes a very nice change to look at a float that hopefully will dip and slide away into the depths. 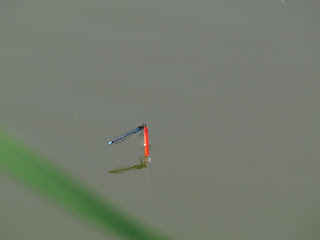 Damsel fly rests on the float even as it lifts up.

I had the float just inches away from the bankside rushes this being a place favoured by these little gold bars although they seem to be avoiding my soft pellet offering quite successfully.  I rang the changes with various baits going on to the size 16 hook, but all to no avail and as darkness fell I had just one apparent chance that fell off at the net.  I always work on the basic principle that if a fish falls off unexpectedly then it was probably foul hooked, this is never truer than with crucians who make a regular habit of getting the hook caught in many places not near the mouth. 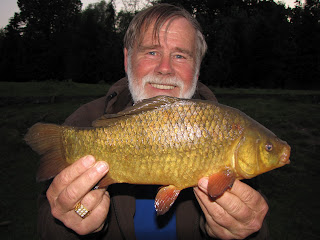 In the dusk the crucians began to sport themselves all around my feed area, they rolled over my float, next to, and generally everywhere about my fishing area but only one took the bait in its mouth.  I did lose another fish which again I put down to foul hooking and that was my sum total for the night having packed up at midnight.  Meanwhile John again did no good with the crucian target but he did get a couple of nice bonus tench with the best a really fat 7lb-8oz sample that was just a few inches too short. 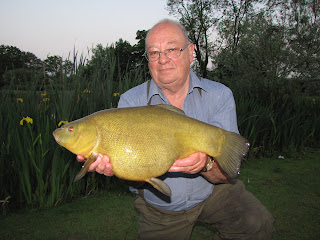 I had been up at the 4:00am dawn for the previous two days in order to bait up for the tench, but the following morning I again decided on an early start but other than a small tench and a few smaller perch and roach I finished about 1:00pm total washed out in the heat of the day.  Harris Lake is not what it once was, but it is definitely better than this result and I’ll be back for these gems sometime soon. 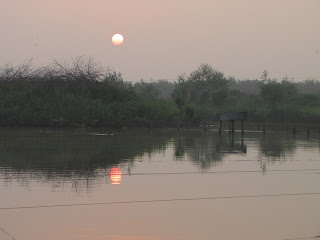