The world of a tench fisher.

It has been a strange week with the start for me on the local canal at 4:30am hoping to catch one of those elusive silver bream.  It was mild, but I knew the temperature would be heading for the mid-twenties a little later in the day, by then I would be well gone since I only intended to fish until 8:00am.  My previous trips had all started later in the afternoon and the barges had been a constant pain until late in the evening when they generally stopped.  Today it was great, not one single boat had decided on an early start and my feed settled into the swim and stayed there.  Just a little of the general cloud with a few casters and maggots included was all that I used, this was then topped up with the occasional four or five extra caster/maggots just to give that falling bait attraction.  The idea was right and by the finish I had taken three bronze bream, four perch and a rudd, fair sport on the light gear but the silvers would have to wait for another session.


Then it was back down to the Reading and District water for those big tench that I hoped were waiting for John Found and myself to put in an appearance.  Reports were coming in of tench spawning on various waters about the area but although we looked there seemed no sign of that activity on this venue.  We had already decided to try a different bank and soon we were in place and fishing.  The weather was still hot with day temperatures around the 25C in the shade; fortunately there was some shade so I took full advantage of it although it did mean moving as the sun turned around and my shaded area moved with it.  The session proved almost as difficult as the previous one but at least this time I did land a fine tench of 7lb-1oz, not the target, but a step in the right direction.  The eel rod took just one fish of about 2lb-8oz so yet again a slight increase in weight and heading in the right direction towards my target for that species. 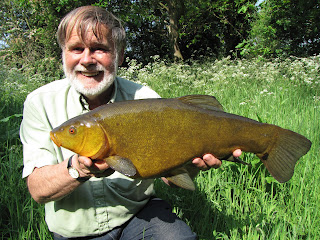 The ticket for the secret midlands tench water finally came so plans were quickly made and the following day saw me arrive on the bank just after 6:00am.  I would be fishing two rods with an artificial corn rig as previously described on one hook, and maggots on the other.  This second hook would include one of the buoyant artificial maggots to counter the weight of the hook as had occured with the corn rig.  By now we had suffered the fairly drastic temperature drop and the high point of the day was now more like 16C, comfortable but what effect would it have on the tench?


I soon found out that at the very least they would feed and it seemed that they had not spawned one this water neither as my first fish was a smaller sample but still carrying spawn and not at all fat.  The day passed pleasantly enough with the best fish of four being a male of about 5lb, a good scrap but not what I had hoped for. 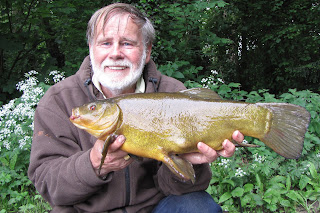 I returned the following day and this time being a bank holiday Saturday I decided to arrive early expecting a few anglers to be there.  Arriving at 5:15am I was first there and for a few hours I was alone.  By 7:00am I had caught four tench, but they were all small males, the baits had proven to be equal in that I caught two fish on each so proved nothing on the preferred bait side of the equation.  There then seemed a period of several hours with no activity, other anglers had appeared and they seemed to be doing just the same, then in the mid-afternoon the tench began to feed again and I quickly took a further three fish with the best going to 6lb-10oz.  These three all fell to the maggot but on so small a catch it proved nothing other than being of slight interest in the longer run. 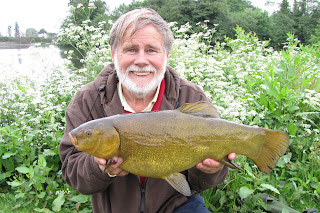 That was it for another week, a good number of fish caught with a couple just about into the pleasing sizes.  Next week will be more of the same, but tomorrow I am at the Barbel Society Conference at the Hinckley Hotel just off juction1 of the M69.  As the first speaker I need to be on time but these tench sessions have got me into the early start mode so no problem there.  Tickets can be obtained on the door so maybe I will see you there, if not tight lines until the next blog.
Posted by Travelling Man at Saturday, June 02, 2012