Following the result of the previous day as described in part 1 of this piece I got to the lake a lot earlier.  Although Rob had already got to the venue 15 minutes before I arrived he had kindly left the swim vacant even though he knew of my results, just for this one day mind you, tomorrow is open house on swims again.


The results of yesterday had suggested that the maggots out fished the corn about 2 to 1 so I had decided to fish both rods on the maggot feeders.  Again no extra feed would be used since this idea obviously worked the previous session, although I did not expect to repeat that result I was hopeful that just maybe I would get the big fish that I had possibly missed. 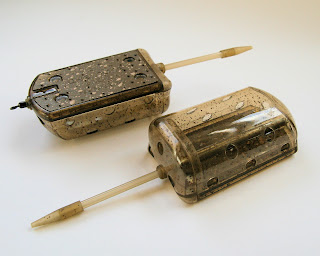 Today started more sedately in that it was probably a couple of hours before the first fish put in an appearance, I was not sure if that was just they were nervous with the number caught the previous day or the fact I had started a lot earlier.   In the event that first fish made it all academical since it was a new personal best for the water and when Rob confirmed 8lb-15oz it came as a double edged sword.  Nobody in their right mind can think that one ounce is a get deal, but this one ounce short of my target 9lb weight did make a difference far greater than its size.  That small individual quirk aside I was well made up with such a magnificent looking fish and thought that irrelevant of the results for the rest of the day it would have been worth the effort. 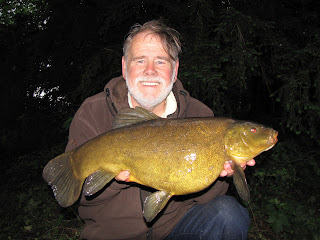 Of course I did continue to fish in the hope of even larger specimens that were potentially in front of me but it was not to be.  The sport was slow but steady as fish after fish came to the net, several more 6lb tench were landed and then yet again I hooked a big fish that immediately put the thought of yet another carp in my mind.  It would just not respond to the pressure I used on the 1.75lb test rods and that can be quite considerable.  Of course there would be only two possible options, it either came in or I would pull the hook, lady luck was watching and I did finally get it to come to my net, all 8lb-6oz of it.  Slightly smaller the previous big fish but a far better fight and yet again I fished on with a big smile on my face, definitely building up to be a couple of days to remember. 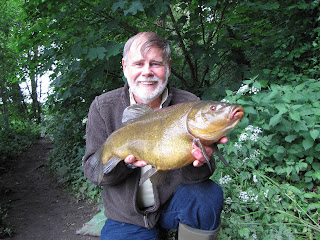 Towards the evening I landed a 7lb-11oz tench that really made the day as one of a nine fish haul, no carp this time but I am not fishing for them so that was no loss, with a total of 25 tench over the two days with three 8lb plus fish and a further three 7lb plus amongst them I retired well satisfied and looking forward to the next session after the big red eyed monsters. 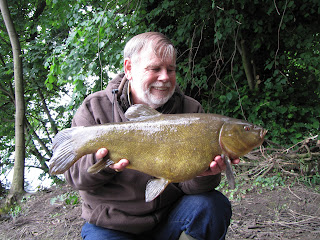