Just occasionally ‘lady luck’ conspires to put us in the right place at the right time and over the last couple of days she has done me proud.  Of course I gave her a big helping hand in that I chose the venue and swim, made the choices as to tackle and bait but I still needed her help in the catching of the bigger fish.   The venue is a big estate lake that is well stocked with tench and bream of all sizes.  The problem on this water is that there is no way to sort out which species, bream or tench, will take your bait offering, and then no way to select the larger specimens of each once they have decided to accept your offerings.  That is where ‘lady luck’ comes into the equation and gives that little extra helping hand.


I had taken a nice catch of tench and bream over the Tuesday and Wednesday as related in my last blog but with the fish feeding well, although in tight areas, I felt I should take advantage of this window of opportunity.  Although I am now retired I don’t wish to fish every day, but it does give the chance to go whenever the conditions seem right as with the current situation, I missed the Thursday and returned to the lake on the Friday morning.


Although I had been arriving quite early on the water on recent trips, I decided to give other anglers the chance at their choice of swim and hence it was about 9.00am when I finally turned up on the bank to find just one angler there, most unexpected as it has been fishing so well.  I had already decided that should it still be available I would try a swim on the opposite bank to that used on the Tuesday and Wednesday and sure enough it was empty, ‘lady luck’s’ first move in my favour.  The next change I had decided on was that I would not use the Spomb to put extra feed out, I would instead rely on just that used with the two different rigs I would employ for my tench attack.


These would be the same as used on Tuesday.  A flatbed method feeder on one rig was coupled up with a Dynamite Green Lip Mussel method mix. I would then use a single artificial grain of red corn on the hair rig with the usual short hook length that I tend to favour for this type of fishing.   The other rod would be using the Drennan Inline Maggot Feeder, again with a 4 inch hook link and a size 12 Pallatrax hook loaded with a single artificial buoyant maggot and a two or three of natural red maggots.


Probably by 9:30am I had two bobbins dangling below the rod just waiting for a tench to pull the line and give that indication of its interest, I did not need to wait too long before the maggot bait was taken by a fish that proved to be a 5lb plus female, a good start in that there were fish in the swim.  Just minutes later the other rod took off and at first I thought I had hooked a big tench as it powered away, but it went too far and was obviously a carp, I really should take up this carp fishing lark it seems so easy, just fish for tench and bream!  Once landed it eventually went on the scales after an unexpected interruption, it came in at a pleasing weight of 18lb-12oz definitely not the target but a great fight never the less. 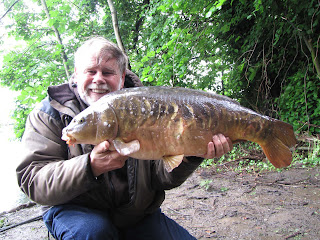 I was still sorting out the scales and the camera having left the carp to recover in the net when the line on the other rod took off and once struck I again wondered if I had hooked a big tench, but now I considered it could be a carp.  I had no need to worry, and as it slipped into the net to join the carp already laying there I could see it was a big tench.  It was quite hectic for a little while as I sorted out the unhooking and weighing of the two fish, regular returns to the water made sure neither suffered unduly for the experience and when I finally got to weight the tench it came in at a very pleasing 8lb-4oz one of the venue’s better fish at last. 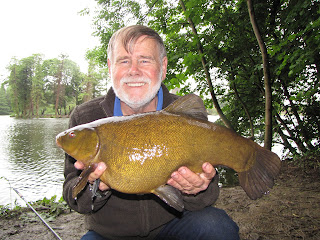 A short and fat 8lb-4oz tench.

The day continued much the same with another pretty carp of 15lb-4oz landed along with several 6lb plus tench.  Two consecutive tench of 6lb-15oz and 7lb-1oz would have made a great brace shot but I was returning the fish as they were caught and the few minutes between those two stopped such a photo being taken. 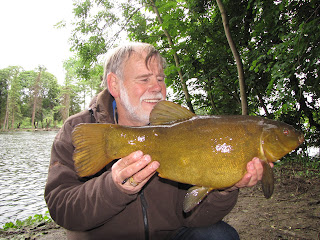 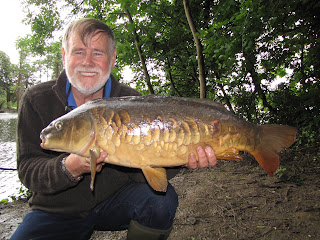 I finished the day at 7:00pm having caught 16 tench and 2 carp.  I could have fished for another three hours, no night fishing allowed, but I felt totally satisfied with my result up to then and I would be returning the next day to try again for those even larger tench known to be present little knowing what was on the cards for me.
Posted by Travelling Man at Sunday, June 10, 2012