A pair of monster tench.

With the recent success on the tench lake I thought it would be best advice to myself to return for another try, so after a one day break on Sunday I returned for yet another session.  The wind had turned 180 degrees from westerly to easterly and it had a definite cold bite to it.  Fortunately the rain had all but disappeared, even though it did try a little in the afternoon but not enough to be of concern.


Same tackle, same swim, and maggots for bait, working on my often quoted advice of ‘if it aint broke’ and so on.  I had arrived even earlier for this trip and although it is difficult for me with a 4.30 alarm clock call I was up and actually fishing by 6:00am.  It is always a question with tench as to the need for early starts as quite often the feeding spell will be more around the midday sort of time, but having lost one to a hook pull and landed the next by 7:30am I was pleased with the action so far.


Over the next three hours the tench came to the net in an orderly and regular fashion with nine landed and another good fish lost when I tried to stop it reaching a distant snag, the hook pulled, but if it had got there I would have lost it anyway.    With three of these tench going over 6lb and the best at 6lb-8oz it was a good day already so when the sport stopped at that point I was not too concerned.  Not long after this another angler dropped into the next swim along and he would be casting his baits to the opposite side of a known snag in the water, the same one that had lost me a fish.  When he began to catch I wondered if perhaps the fish had moved from in front of my swim to his.  With four tench to him and none to me over the following hours we came to about 3:00pm and my bobbin rose to the rod at last.  There followed a great scrap with the fish just not giving in, fighting all the way.  Fortunately she had kited in the opposite way to the snag and I had little concern about any problem that way but there is always the unknown.  The gods smiled and I eventually looked down into the net at what was obviously a very big tench.  With the Fox Digital scales flashing between 9lb and 9lb-1oz I was happy to accept the fellow anglers verdict of a 9lb exactly weight, target set and achieved! 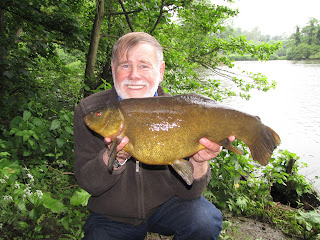 A couple of sixes followed that fish over the next three hours, and in the meantime the fellow angler and his companions left for an early tea in order to listen to the England match on the car radio.  At 6:20pm I got one hell of a surprise as the bobbin lifted and yet again I was playing a big fish, this one even stronger than the last and I felt sure it would be a carp.  The surprise was that it proved to be yet another 9lb tench, to be exact the scales held steady at 9lb-4oz, yet another pb for the venue.  I spoke with Leo Heathcote fishing on the opposite bank but his tackle would not be safe if he left it unattended so the photos were taken with the self-take option.  Just one more tench followed that and I packed up with 15 tench which included five sixes and the first brace of nines taken in a day as far as is known, what a result! 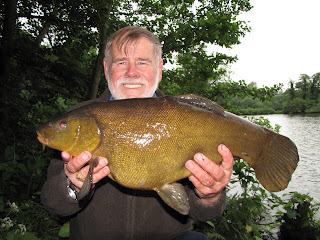 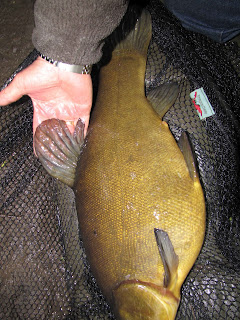 As I was leaving I stopped off at Leo’s swim and compared photos with his nine of a few weeks back and it seemed to be a definite different fish.  Both of my nines have a distinctive features making identification fairly easy, the first fish had quite a visual drop at the top edge of the root of the tail whilst the bigger of the brace had damage in the shape of a V within the dorsal fin, either fish will be known when recaptured.  I’m off to Scotland on Saturday for a week to try for the big roach that have shown up there, when I return I will try the tench lake again hoping they will not have spawned and perhaps I can improve on even these monsters.
Posted by Travelling Man at Tuesday, June 12, 2012