As you will have seen from the yearly review I do travel abroad a fair amount as well as fishing in the UK so it will come as no surprise that this blog is on foreign fishing.   My fishing partner on the majority of the trips abroad over the last 30 years has been Joe Taylor who runs J&K Tackle in Bicester and yet again I will be travelling and fishing with him in Suriname. 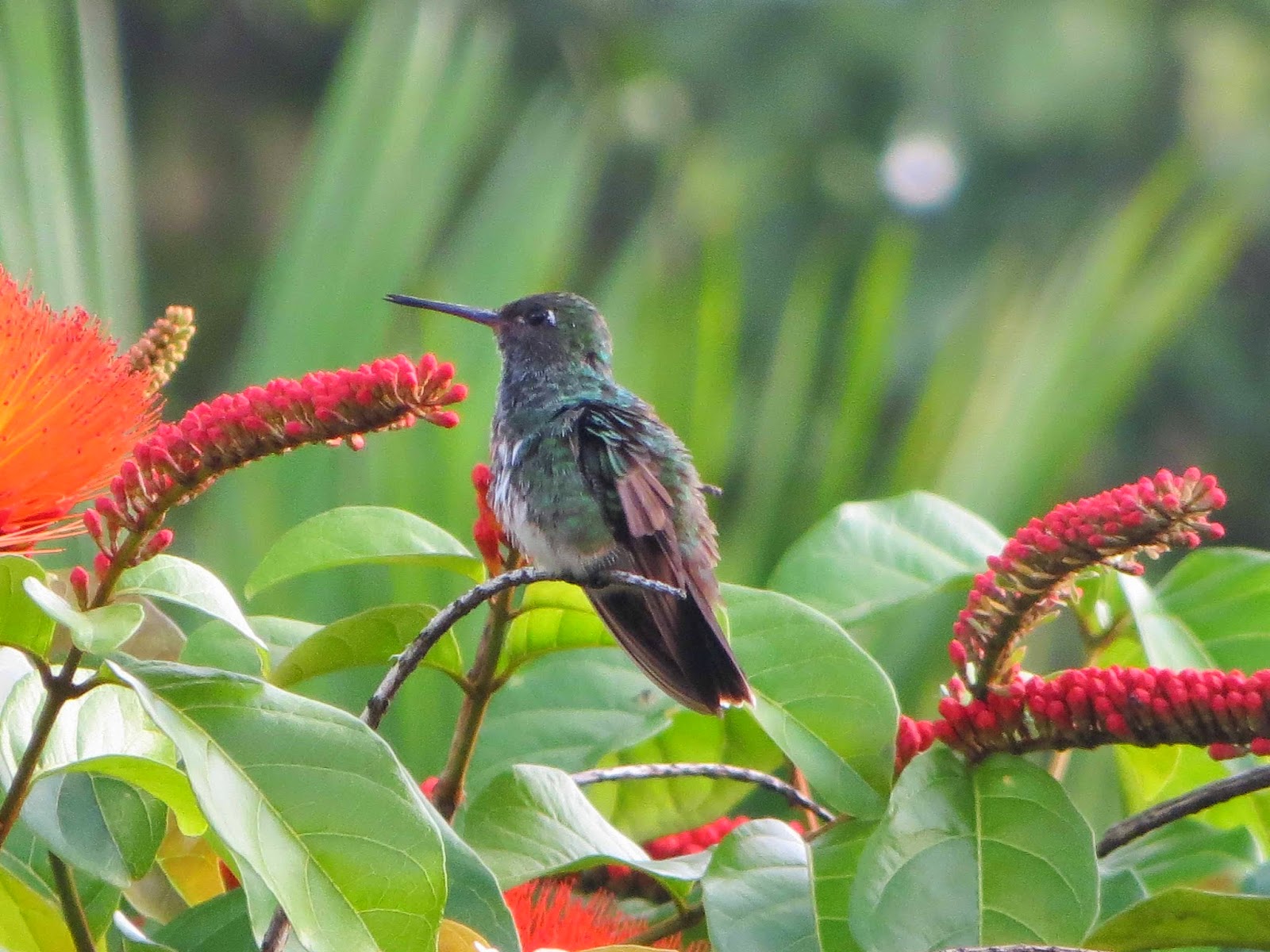 A hummingbird photo after trying for many trips.

The intention is to fish for laulau, a catfish that may grow as large as 300lb but 200lb is a very respectable target and even to catch one at all can be a challenge.  Fortunately Joe has travelled and fished in many South American countries on different river and now had found a river that gives an above average chance of catching, almost guaranteed in fact.  With that thought in mind we got onto the EasyJet flight to Amsterdam in the early hours of the 2nd January to catch the onward flight with Suriname Airways to Paramaribo in Suriname.  Joe’s experience gained over dozens of such trips is worth its weight in gold soothing out any problems with ease.   By the time we get on the platform that will be home all provisions, both those supplied and what we purchased as extras are on board and we set off up-river. 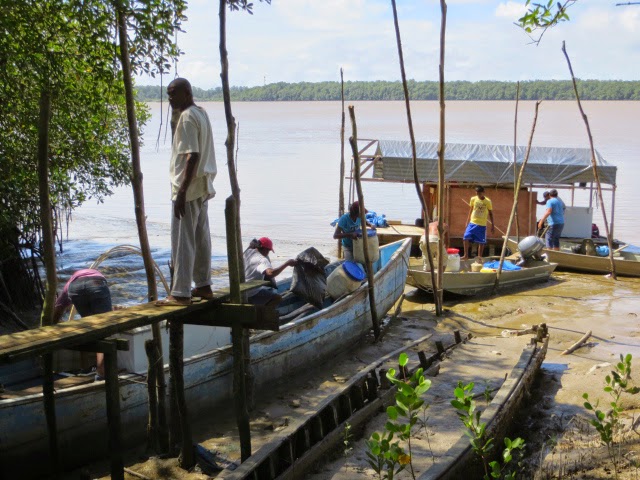 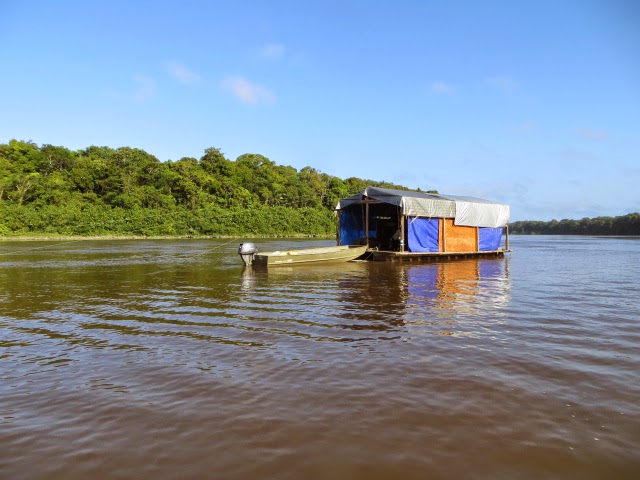 Home from home on the river. 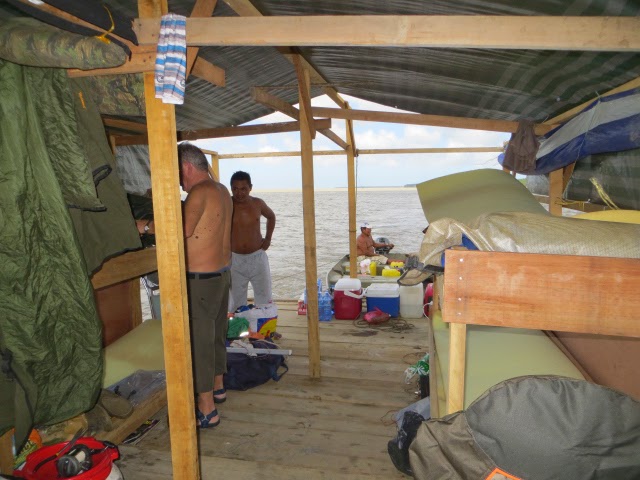 Sorting gear out as we move off.

The platform is a brilliant idea being built on the top of a large number of oil barrels and it proves to be total stable in any flow or weather conditions.  The river is tidal and the only way this base can be moved is to travel with the tide and hence timing is everything.  The usual fishing boat we would have used previously is now used to push the platform and the GPS shows a very pleasing speed of between 5 and 6 mph.  We travelled for about 5hrs to the first major tributary junction, a known good fish hold area and we anchored up.  This in itself was quite a surprise in that on a fast, powerful flow we could anchor in the middle of the river all be it with probably the best part of 100 yards of rope between the anchor and the platform.  Most of the spots we fished over were at least 15 metre and many went down to 20 metre plus.  The laulau seem to prefer these depths and an added extra was that the piranha do not general go that deep. 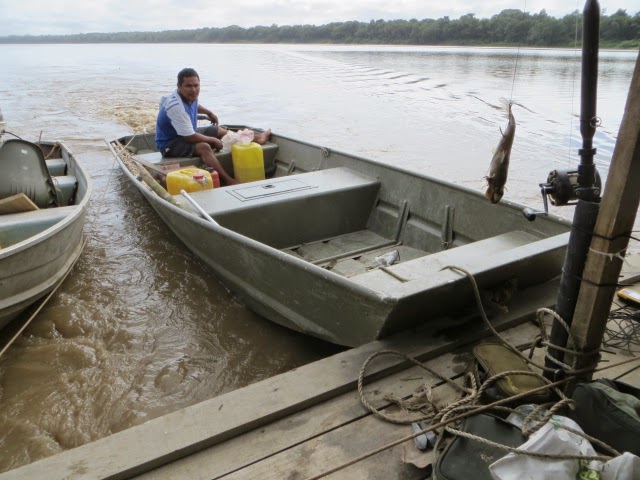 The push is on and we move upstream.

Our guide for the trip was Winnel and we also had the services of Papa George who would be responsible for obtaining out bait, very important in that no bait – no fishing!  With a generator and freezer on board we had purchased twenty bait fish from a fish market on the way to the river.  These gave us a start and also allowed time for Papa to get his nets working; although this low down the river we knew it could be difficult to catch baitfish.

Tackle for these fish needs to be pretty powerful and 50lb Class boat rods are combined with multipliers loaded with 150lb to 200lb braid main line.  Hook lengths are 100K Kraken braid with a single 10:0 hook at the top, and a size 2:0 or 3:0 4x extra strong treble at the bottom.  The clutch is set such that you cannot pull the line off with your bare hand, the laulau take off as if you had not set it and on my first take I got quite a blister on my thumb when I placed it on the reel when I struck, the line burns as it rips off! 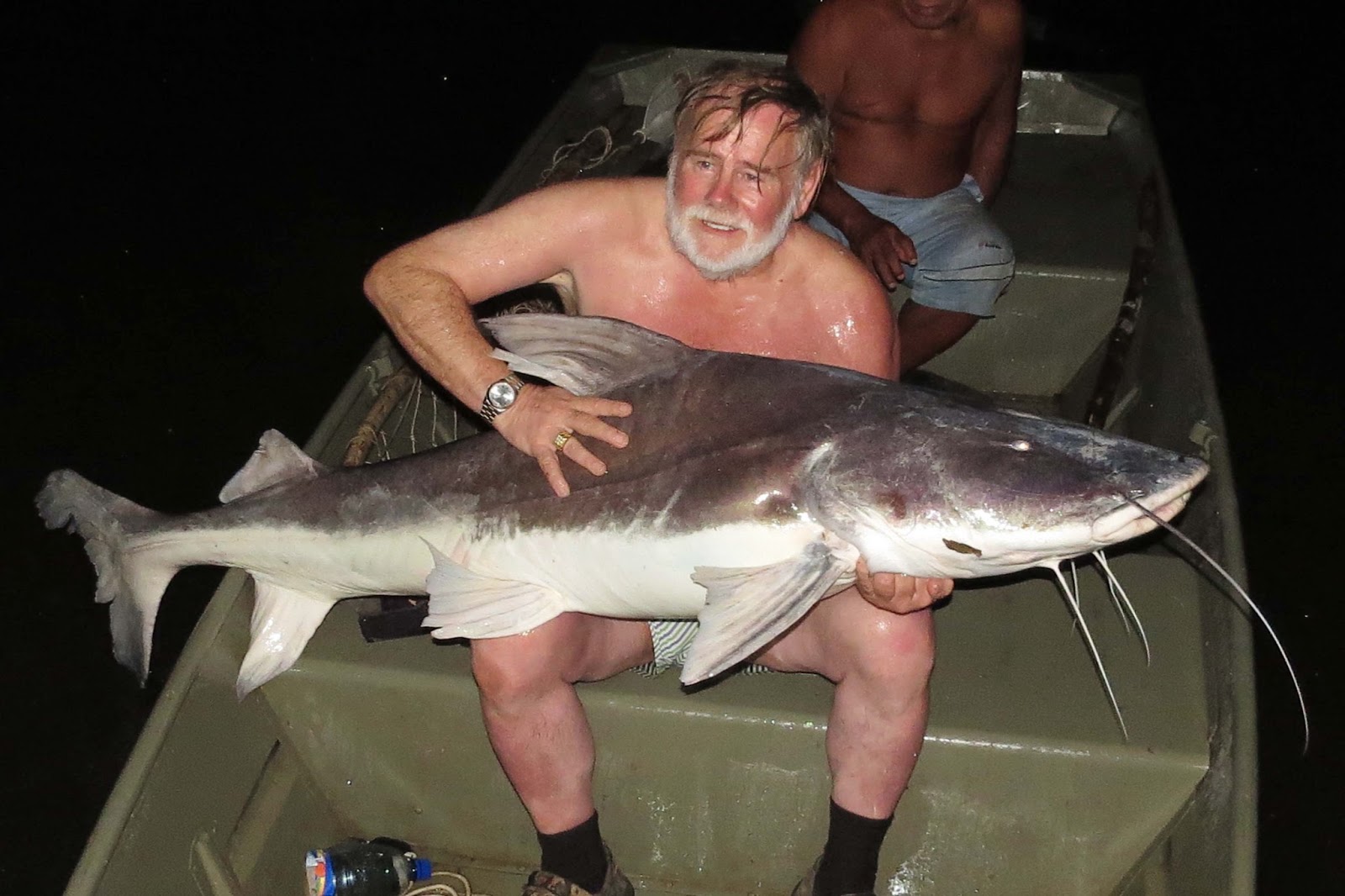 My first fish of the trip - 150lb estimate Laulau.

We actually put the first baits out at 5.30pm and Joe had four dropped runs before my first confident take at 10.30pm whilst it was pouring with rain, following a great fight this produced a fish estimated at 150lb.  This river system gives very little or no chance to take fish to the bank and with me at 70yr old, Joe at 67 and Papa at 64yr old it only left the 36yr old Winnel who was anywhere near fit enough to lift these weights in difficult settings.  The result of this was that most fish were estimated in weight, although those that were weighed showed the estimates to be quite accurate.  The same problem also limited the photo chances although we got enough to satisfy our vanity.
Although not exactly even in time in that the upstream tide is about an hour less than the downstream run, the tide turned every 6hrs and each turn requires the anchor rope to be retrieved and then slowly let out again once the platform had swung round on the flow.  Left to itself this could take ninety minutes or so going through a slack period, but often Winnel would use the boat to pull and push the platform into place reducing the time to ten minutes.  We stayed in this junction area for 48hrs with a move of 500yds between the days fishing, the results were spectacular.  I took further fish of 130lb, 140lb, 150lb, 150lb and a final 60lb fish.  Joe took his share with fish of 60lb, 90lb, 120lb, 120, 135lb and 150lb.  With the fighting power of these fish it goes without saying that this was spectacular sport and exactly what we hoped for. 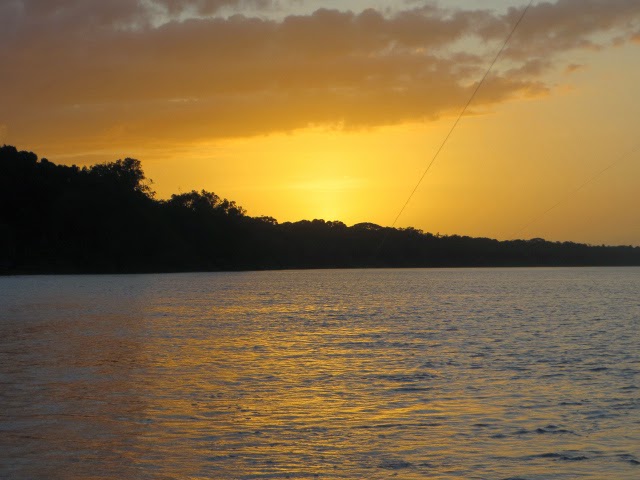 We are fishing during a period known locally as the little rain season, that only means that it does not rain all day, every day.  From bright sunshine to very heavy rainfall could be just a matter of 5 minutes and it occurred on a regular basis, it must always be remembered we are fishing in a rain forest and it lives up to the description. 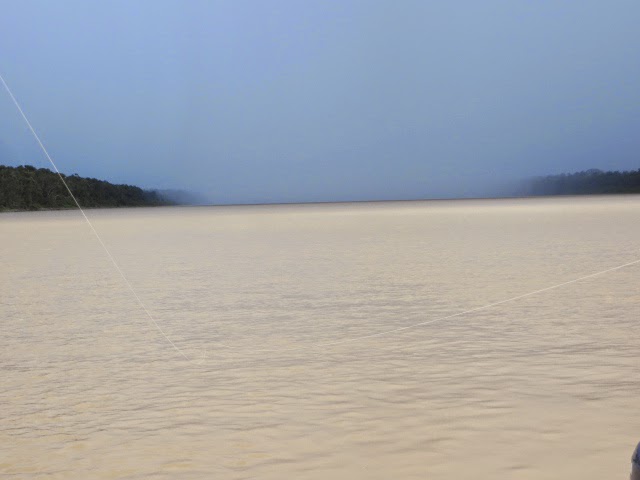 Storm can be seen approaching.

Over the following days we both caught fish on a regular basis and eventually we reached a tributary that to the best of Joe’s knowledge had not been fished with rod and line and it was one of his targets for the trip to catch a 100lb plus laulau from this river to add to a growing list where he had already achieved that aim.  He had already caught his other target fish on the junction, that being a golden laulau of 58lb.  With probably hundreds of laulau to the groups that had accompanied Joe over the years to South American rivers, this was only the second gold that had been caught so obviously a major catch for him. 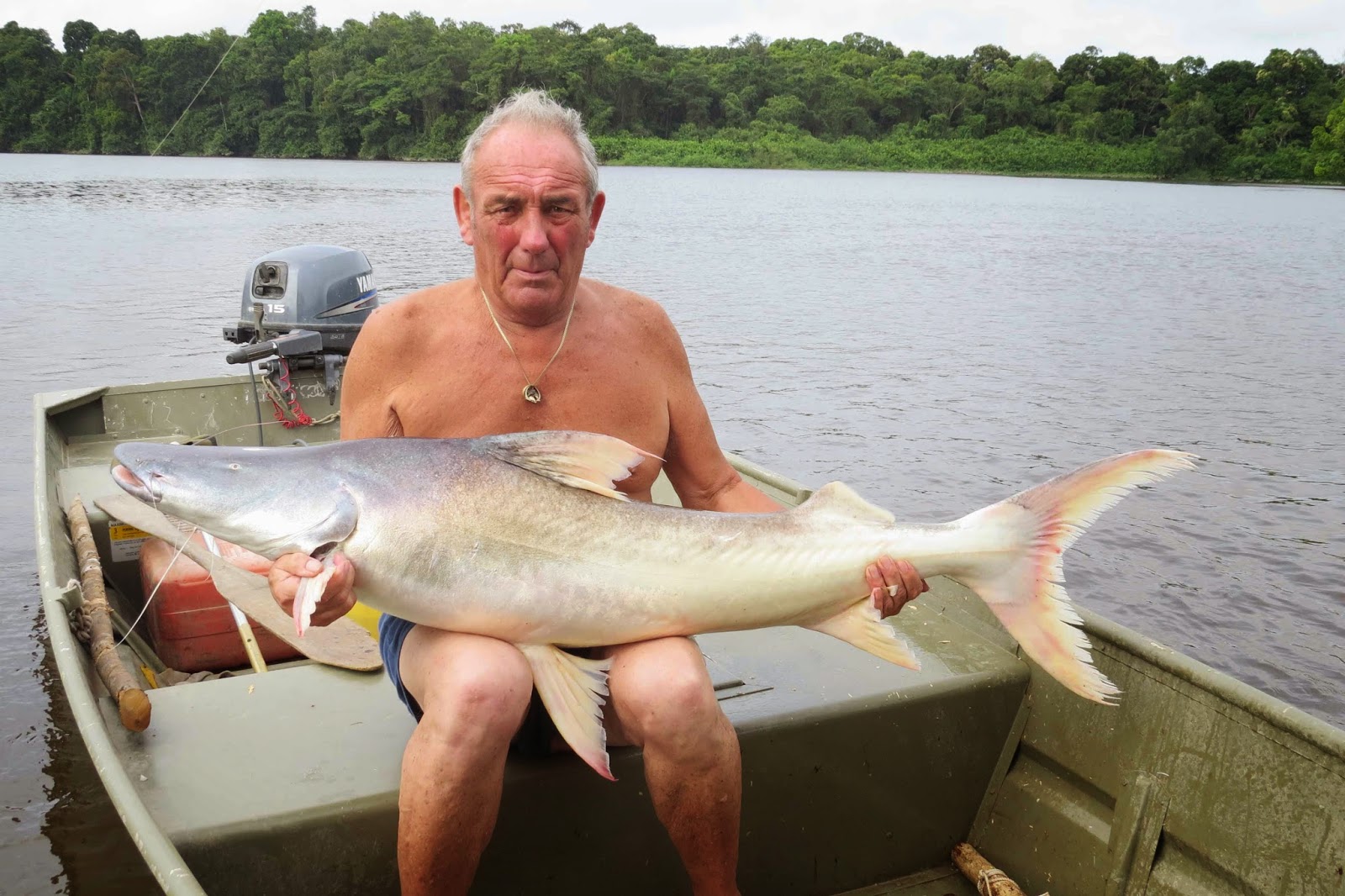 Joe with his first golden cat, a different species to the laulau.

Although we were going into a tributary it was still a major river the size of the Thames well below Reading and we could only hope the fish we were after would be present.  We travelled three hours along the new river and came upon a large bend with depths going to 17M, good enough for a start and we anchored up.  Nothing happened through the daylight hours but the darkness gave me two chances, the first of these was lost to a tree snag along the side.  I had tried my best to beat the fish but this was probably the most powerful fish I have ever hooked and at no time was I in control.  Probably if I had hooked him on the main river I might have landed him since that river was so much larger but that’s fishing and I pulled for a break from the snag that gave him sanctuary.  Two hours later and I was again fighting a very powerful fish but this time I could stop him running once the boat was over his position nearly 60ft below the boat, Winnel will keep the fish away from the banks providing you can stop him running.   This is what the fishing is all about, the rod bent to 90 degree and my hand holding both the spool and the line coming off the front of the spool in an attempt to stop him taking line.  Providing I can keep above him there is less chance of him snagging and very slowly he came up through the water levels.  Winnel said he was big so we carefully took him back to the platform and with some difficulty got him weighed at 190lb.  The photo is not brilliant, but it does show the size of the fish and it will be a welcome record of my new personal best. 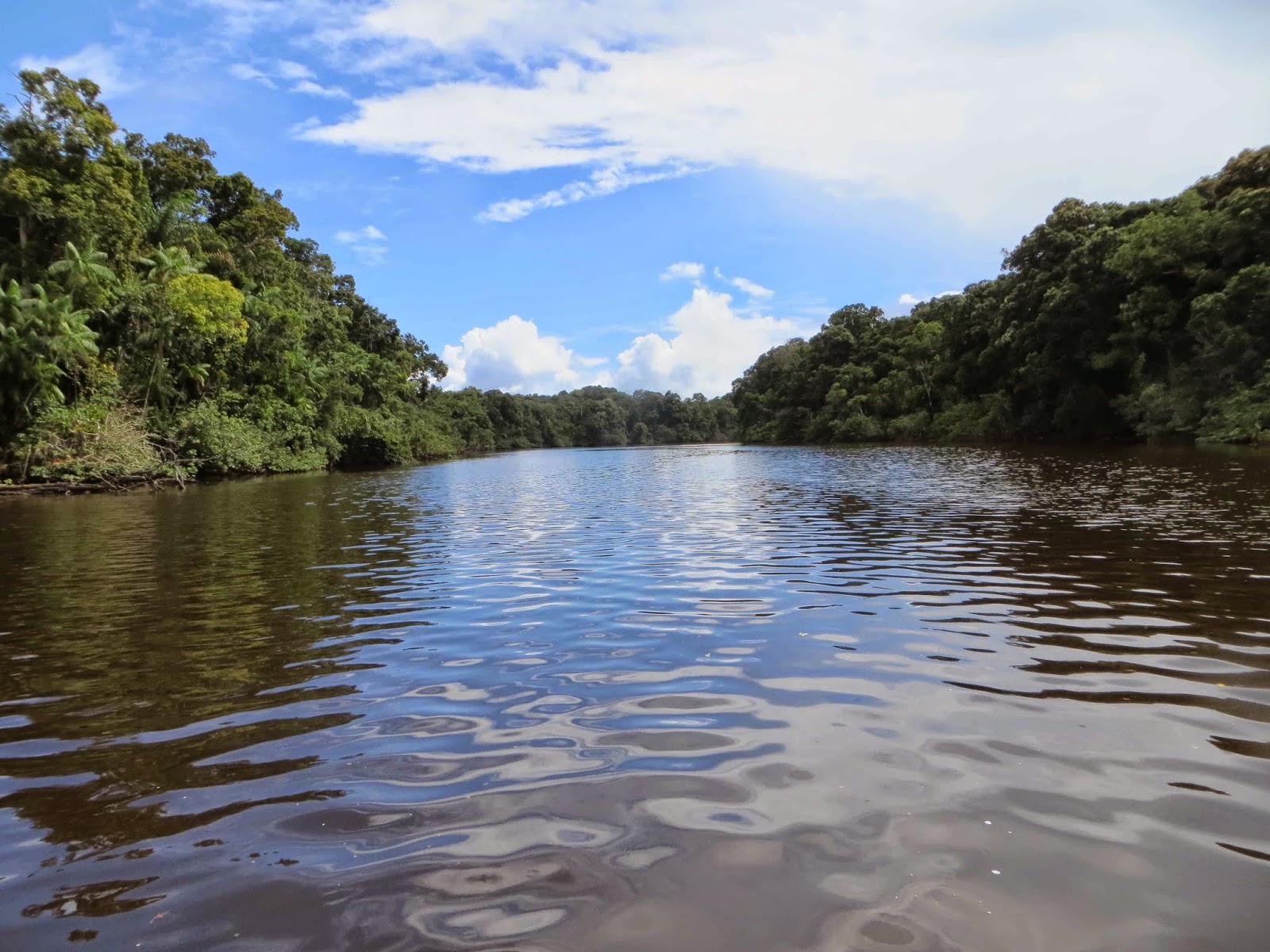 Continuing upstream we took a few small laulau and eventually got to the point that Joe had identified as to where I would leave him. I would be flying home on the 21st Jan but three other anglers were travelling out to join Joe and they would reverse the route we had taken and eventually fly out on the 7th Feb.   Joe was still waiting for his 100lb target fish and it seemed fate was not on his side as I landed fish of 178lb**, 165lb, and 120lb finally my last fish at 155lb.  In this area there was a spot where we could stand in the water on a hard bottom and hence we could weigh the fish so all of these were true weights.  Again it gave the chance to confirm estimates and it proved they were realistic and close enough for in the wild. 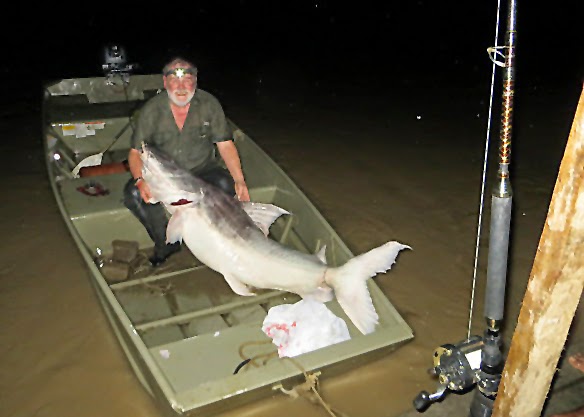 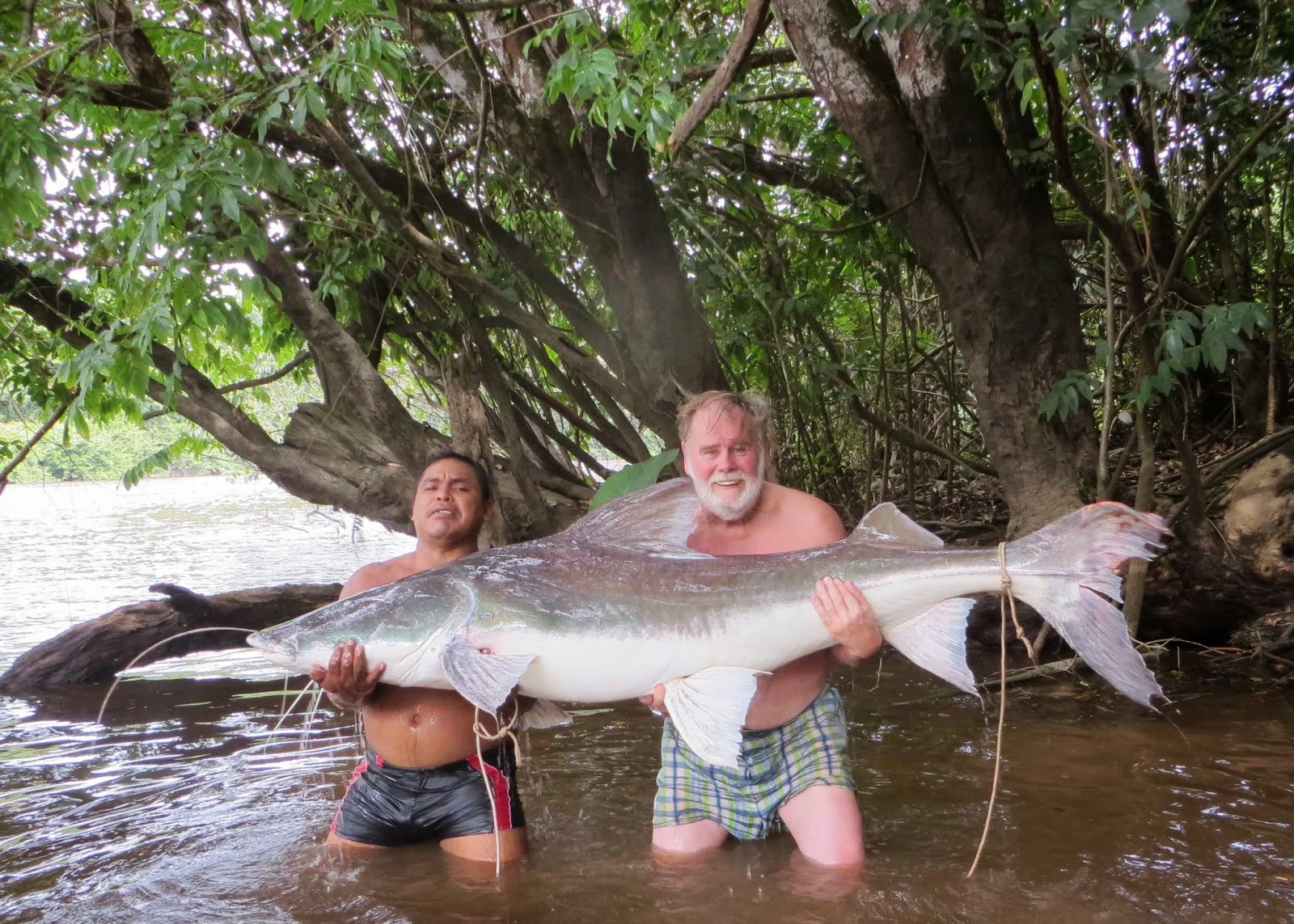 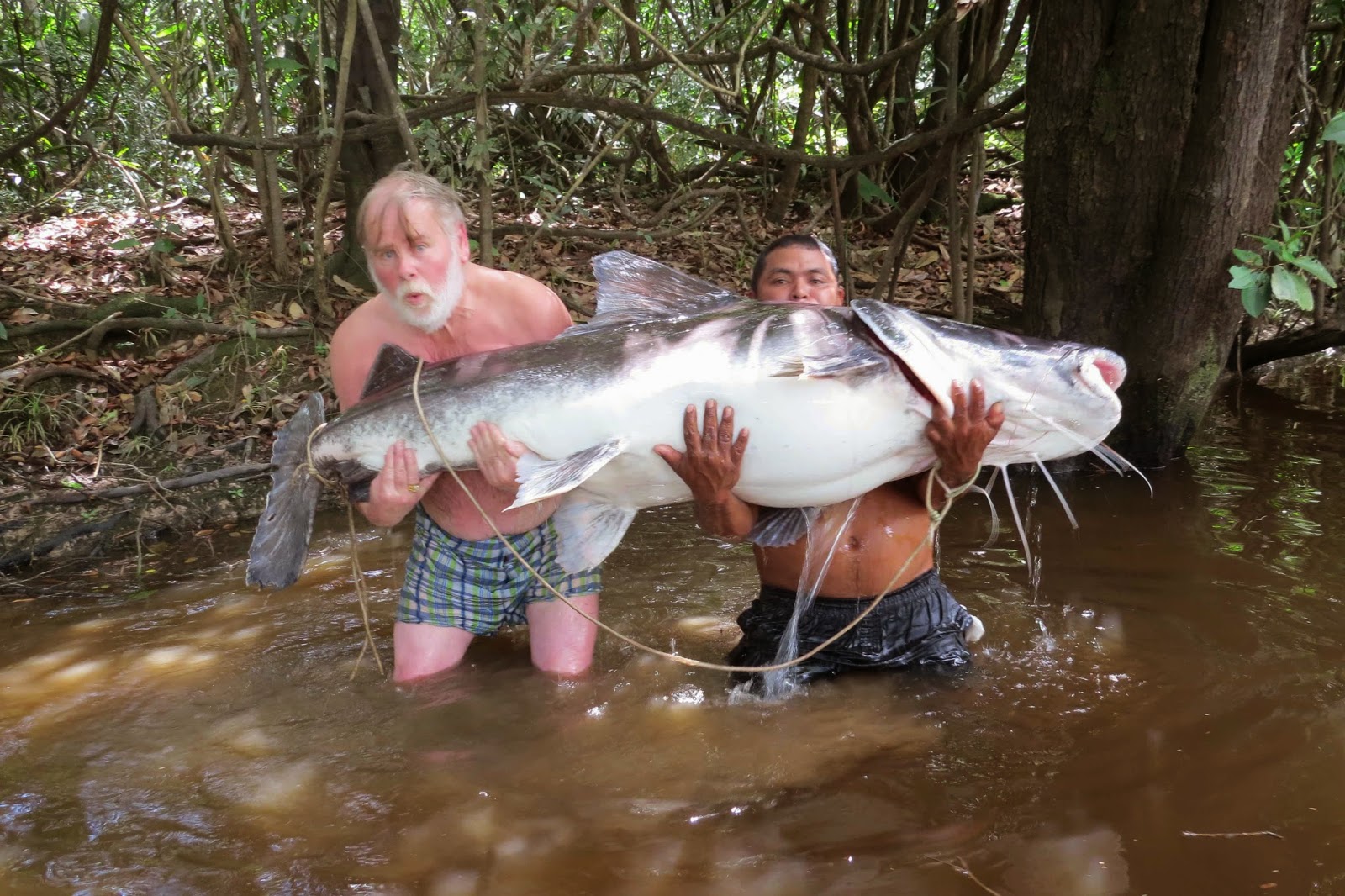 It was looking bad for Joe but with his usual ease he finally got one of 100lb plus, in actual fact it was over double that and the biggest so far at 208lb his third different river with a laulau over the magic 200lb mark. 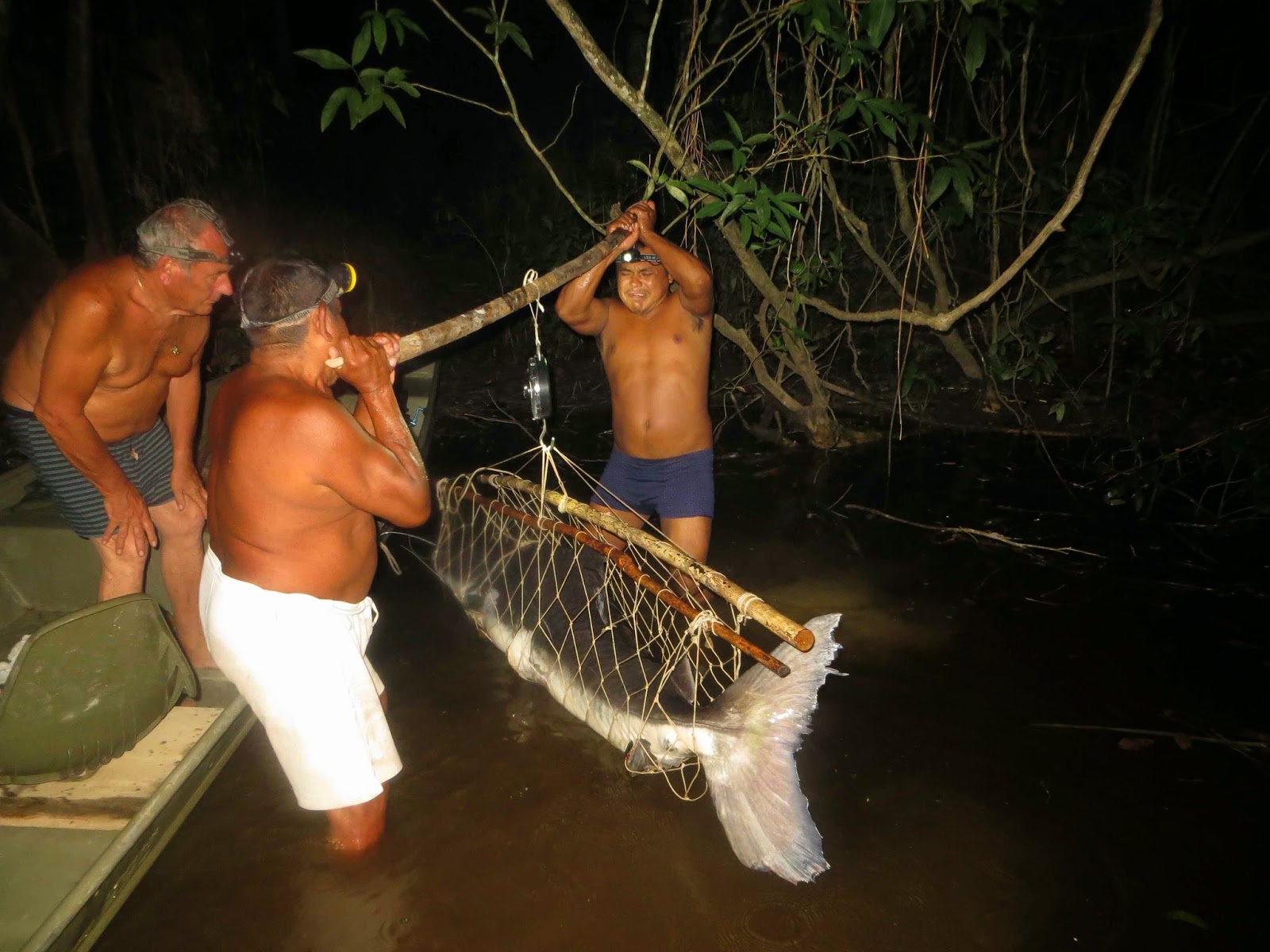 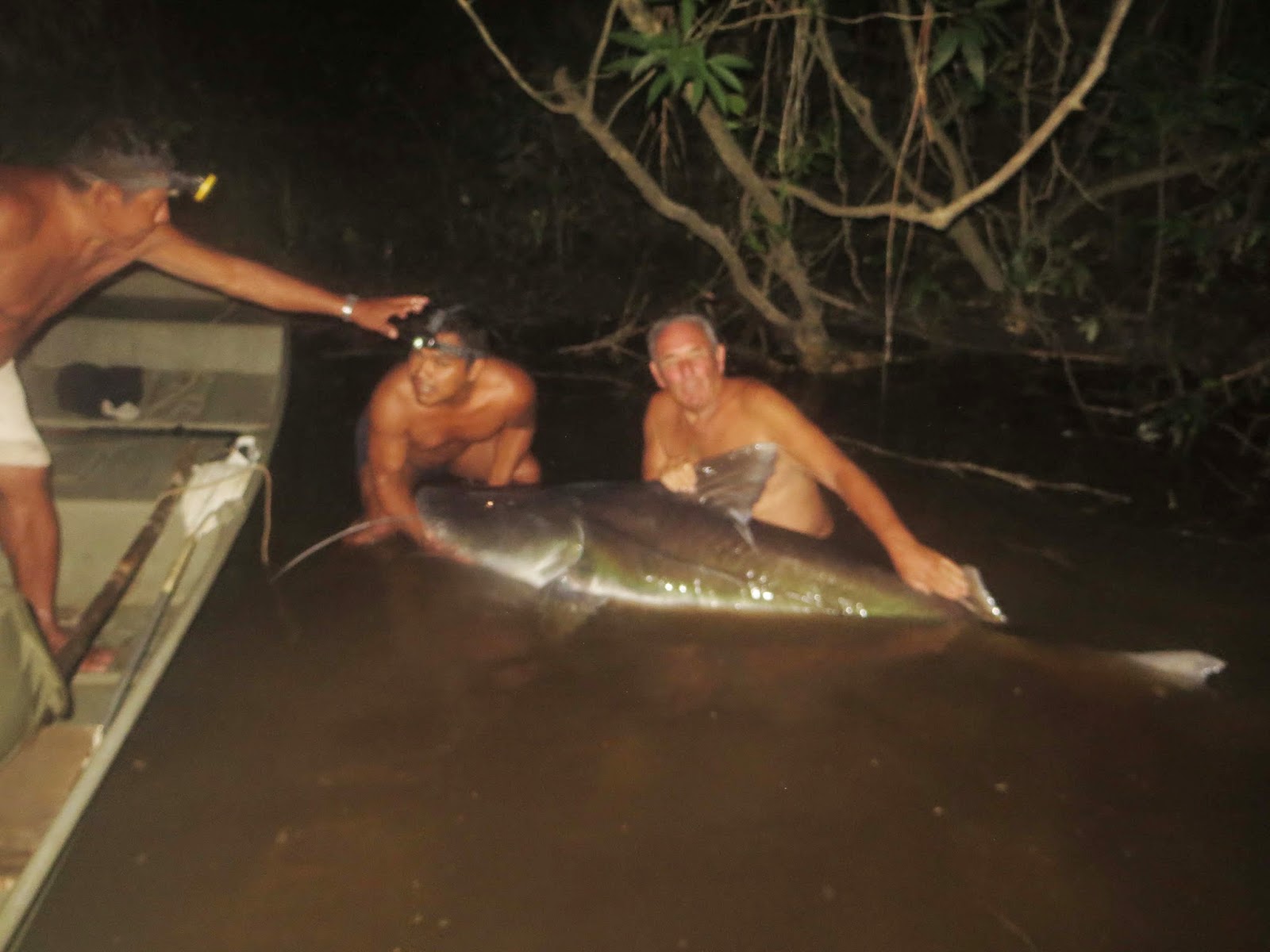 That was me finished, 23 fish with 14 over the 100lb mark for a total weight of 2460lb, well beyond my wildest hopes for the trip and I look forward to next January and a return yet again.


For those that might be interested in this adventure here are a few of the details.  The basic cost for the trip is 1400 Euro for the first week and 100 euro per day above that.  The flights and hotel will add about a further 1000 euro.  Basic food is supplied but we always top up at the supermarket with tin meats and mixed veg, bacon and sausage, and the like, perhaps less than 100 euro per pair of anglers per week extra.  The tackle used for Spanish cats would suffice and the hooks and braid are available here.  Suriname is at the top end of South America and temperatures can easily be checked out on the web.  Further details can be obtained from Joe when he gets back, just ring the shop.  Joe is back out there in June and at this time he is looking for a second angler to join him, this spot might have been filled by the time he gets back.