A trip down south can always be that little bit special since both the Hampshire Avon and Dorset Stour hold specimen chub to make the mouth water.  The weather forecast looked good and time was running out for this year so plans were made, tackle and grub laid out and the alarm set for 4.30am ready for the off.

Although busy the roads at this time are not too bad and I get down to Ringwood area just before dawn and I’m soon making my way along the bank to the swim I had chosen for today.   A deep water run with a long line of bushes and trees along the opposite bank to give perfect cover for the chub that would be my target today.   I’m down for two days and have brought six pints of red maggots; I can always get more from the local tackle shops in Ringwood if needed.  My first task is to bait drop six droppers of maggots across to the head of the swim, that done I can take my time in tackling up the rod and preparing for the day.   My tackle is the same as I’ve used for several years while after chub.  A 12ft Drennan IM8 Feeder Rod is paired up with a Mitchell 300 reel loaded with 6lb line.   I will use a running Blackcap feeder setup and the 3” hook link is 4lb Fireline going to a size 18 Drennan Superspade hook.

Casting across the fast flow under my own bank gives two potential problems, the first is the amount of debris coming down the flow in the form of dying rush and streamer weed.  This at least ensures that a regular recasting takes place which can be all to the good especially when the minnows are about.   At the moment it seems that the grayling have also had a successful time and these can be a problem as well.  The second problem with that fast water is that of netting the fish once hooked.  This trip, as with so many others in the past the hook holds were right on the outside edge of the lips where the fish were very cautious, but could not resist the maggots.  Constant casting and the occasion top up with the feeder kept a stream of maggots going down under the bushes and I hoped that the chub would eventually respond.  They did and my first fish was almost at my target 7lb weight but fell short at a very pleasing 6lb-10oz, my largest for a couple of seasons.  The Avon is a magical river being crystal clear most of the time but seeing a monster fish fighting on that light tackle can give heart stopping moments. 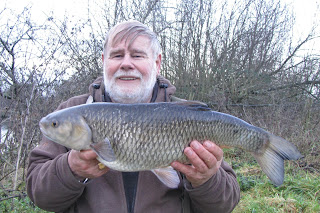 That was my only action off the chub and I was sure that there must be others in the swim, to that end I changed my plans and determined to return next day to take advantage of the feed already placed in the swim.   One of the question marks you always have when you go fishing is that of whether somebody fished the previous day and hammered the fish?  I at least knew the answer and with just the one fish caught I also knew it was worth a return.

The morning was wet with drizzle coming down for most of the time.  With maggot fishing it just means you need to take extra care to keep them dry, the slightest sign of damp and they can crawl even upside down and around the lid.  With the same tactics as the previous day I soon had a few taps that indicated that the fish were there though nervous.  It took time but eventually one made the mistake of just taking the maggot too close and he was lightly pricked though enough for me to land him.   This fish of about 4lb was soon followed by one 4lb-10oz but then the next one slipped the hook which was almost expected so not too disappointing.

It went quiet after that but then I hooked an obvious big fish, it might have been a barbel but the fight suggested a large chub since it tried to get to the branches.  I thought I was going to land him and was well down from my starting point having followed him a little way downstream.  He held in the middle of the river though too deep to see and then he made a dive for the far side trees again.  I allowed a little way but then stopped him and my hook link broke.   Pete suggested it could have been a seatrout with their serrated jaw, it makes sense but I’m still wondering.
Posted by Travelling Man at Thursday, December 22, 2016