It’s tough out there, the last six weeks have been a bit up and down, but too much down to be honest!  Following the 28th river double I had hoped to get a reasonable chance to go to the Ribble in an attempt for the next river, the cold weather and timing did not allow that but it’s still there to be done.
One success was an attempt to catch a large roach from the Linear complex.  I seem to remember that when I was fishing on Willow Pool for the large roach there was another big 3lb plus specimen reported from Smith’s/Hardwick on Linear.  Now word had come that good roach were again being caught so plans were made for a few visits since roach are always a favourite.
The Linear Complex covers a number of lakes but it seems the Brassnose 1 and 2 offer the best chance so I made my way with John Found for a days fishing to check out the lay of the land on Brassnose 2 [B2 in most conversations here].  Having studied the aerial maps like Google Earth I could see a good number of bars on the western bank and thought these could be a good starting point though conversations with the bailiff suggested the opposite bank seemed a better bet.  We both blanked the day but the groundwork was not wasted and no doubt on its day fish could be caught along this bank.

The next trip we took the advice and although I blanked John did catch a nice roach though still under our 2lb target weight.   Our methods were similar being the standard helicopter rig with a maggot feeder and maggots as bait.  The rods were 13ft Drennan Feeders and main line of 6lb went to a hook link of 3lb with a size 14 hook.  Over the following visits I would vary this tackle to try and find the most successful, though at this stage I am assuming these fish are not the educated in finer tackle since most of what they see is for carp and they sometimes get caught on that gear.
On my next visit the weed was less of a problem and I fished a little further out.  I checked for features but there appeared to be very little variation.  There seemed to be just a slight change in depth so with my marker float out in place I marked my fishing rods for distance with rubber and using a spod I put out a bit of hemp, pellet and maggot for feed.   This possibly proved to be and error since over the session I hooked into four carp that gave me very little chance on the light gear.  I did land one of about 10lb but the others were too powerful.  On the brighter side I also landed my first B2 roach at a very pleasing 2lb-7oz.  Fortunately the bailiff had just arrived as I landed it so I also got better photos by the waterside. 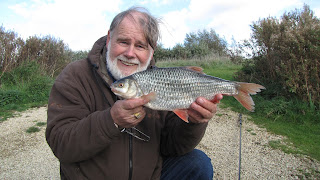 Further trips are planned an less feed and perhaps a sweetcorn variation of bait will be tried since in Spain that is by far our most successful bait, with that in mind my next trip is to Spain after roach.
Although Mequineza is mainly known for the catfish and carp that grow to large sizes I prefer to go after the roach having already caught enough of the others to be happy with that choice.  Of course this does not mean I will not try for them and indeed I had a days fishing after the carp while on a previous roach trip that gave me a 44lb-14oz common, very pleasing. 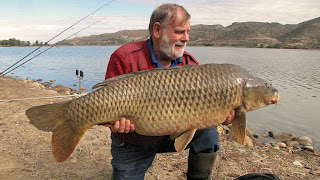 My regular companions on these Spanish roach trips are John Found and Pete Reading.   On a previous trip in the spring that I had missed Pete had caught the fish we had hoped would be there and at 3lb-10oz it made a truly worthy target.   Now in the November of the year we were fortunate that the weather was holding quite nicely, last year we had to contend with major floods that made fishing very difficult.  Following several trips for roach here we now have a good working knowledge of places to fish both on the River Ebro and on its tributary the Segre and on the first morning we set about trying the first spot this time on the tributary.   Our tackle is similar to that used on the Linear Fishery already described, the only real difference here is we use sweetcorn as the first choice of bait with pellet as a back.
The stock of roach here is vast and it seems they are spread far and wide, as a result of this if we have not had significant indications of fish being present within the first couple of hours we move on to another place.  This proved to be the case this time and so we moved to the so called Mines area.  This is a manmade area of flat, built up bank that is often used as a local match venue and gives access to the 40ft depths of the Ebro.   This time we got the expected action and caught a good number of roach to well in excess of the 2lb mark. 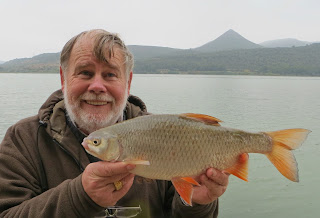 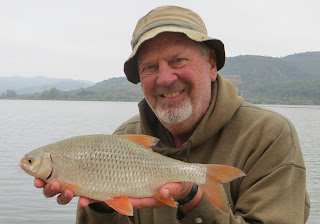 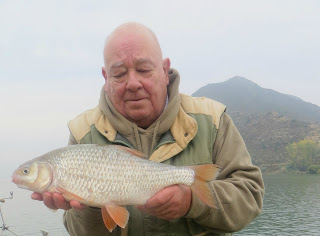 
Over the following days we moved around and caught the roach in each place we tried following the first failure.  The total of 2lb’s increased and then in the dying hours of the last day as John hit the jackpot amongst the other fish being caught.  Exactly 3lb and a real gem to end the trip on.  With 17 roach over 2lb and another 5 at 1lb-15oz it now remains for me to get that final target fish.
Posted by Travelling Man at Thursday, December 01, 2016