Dream barbel off the River Anker

Following a dead week for results and with the temperatures rising I went over to a local tackle shop on the River Anker to renew my yearly permit.  I did see photos of big barbel that inspired me to change my mind as to where to fish as it turned out I was already fishing a good length.  Going without a bite of any nature over the last number of visits in previous seasons I had begun to lose heart, and hence I was going to make the move to a new stretch.  As it turned out I blanked yet again, but that is the nature of trying to catch big fish of any species, often they are few and far between.  I packed up about 8:00pm and made my way to another meeting where I obtained a second club ticket ready for my intended more serious attempt for a River Anker double figure barbel.
The next day I had intended to go onto a local commercial after the perch, but when my little widget on the computer showed the local temperature at 12C I changed my mind – go perch fishing when it is down to 6C – barbel today.  Back to the River Anker, but I decided to try the stretch I was going to fish the day before, as you can see I do bounce about in my decisions but I get there in the end.  Still, I arrived at the venue and walked the length to decide on a swim settling in what appeared to be an interesting spot.   I was just putting my tackle in place when a bailiff appeared on the scene and recognised me as an angler who he had requested to be a friend on Facebook on a couple of days previously.  As it turned out he did me a good turn by suggesting a better swim further along the stretch.  Local knowledge is always worth listening to so I moved along with his help to get the tackle into place.


My tackle was the usual mix of open-ended feeders to take out hemp loaded mixed pellets and then Dynamite Monster Crab boilies on the one rod, and elips pellets on the other.  The lad’s name was Mark Turner and he stayed talking about various aspects of the fishing scene for some hours before the boilie bait was taken and the rod bent over quite a way even with the line going out on the baitrunner.  Quickly picking the rod up I struck into the fish and felt the pleasing resistance of a good fish.  ‘Is it big?’ asked Mark, and I could only suggest that although definitely a good fish I did not think it would be that large, might even be one of the medium carp known to frequent the length.     As I played it, I became more thoughtful that it might be bigger than I initially thought; it was not coming to the bank that easily.  Then it surfaced and we could both see that it was a very nice fish, almost certainly well into double figures, it came that little bit closer and Mark netted it first chance and my River Anchor double was safely in the landing net. 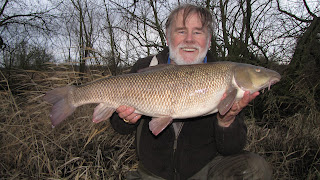 I was quite excited at this fish and wondered just how big it would be, soon the weigh sling and scales were ready and once the zero had been confirmed by Mark, I loaded the waiting fish into the sling and hung it on the scale’s hook.  The Fox Digitals hovered between 15lb-4oz and 15lb-5oz so I gratefully settled for the lower figure.  That was the 5th different river where I’ve caught barbel in excess of 15lb, and the 21st different river where I’ve caught a double figure barbel.  I don’t pursue this target as much as previous seasons, but it will always be that little bit of a special occasion when it happens and another river is added to that growing list.  I stayed on into dark and took a little bream but no other fish showed so I retired about 6:30pm and returned home with a smile on my face. 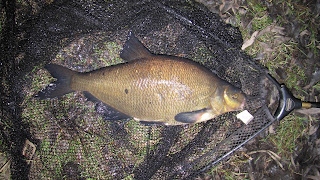