It has been a strange start to the New Year and although I got my first 2012 barbel on the second day of the month it was of a moderate size and the other fish I have caught since then have been equally moderate. 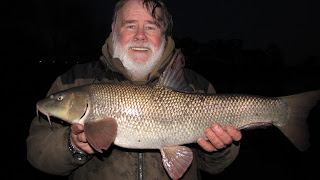 First barbel of 2012
Blanks on the zander front, perch to 2lb-9oz and the barbel of about 5lb, nice fishing but I had hoped for better.  With the weather forecast for the second week looking very good, that description being dry and double figure day temperatures, I decided on a trip down to fish the Kennet and soon had three days arranged with John Found. 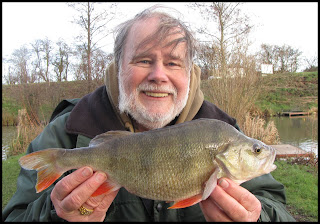 One of the 2lb perch caught.
Generally my plan was to fish for chub the first day, this would be on my own as John had other plans, the following two days I would fish in his company and we would plan where to go, and what for to fish for as the time came.


I arrived to find the river very low and clear as is so often the case of late on many rivers, we need lots of rain desperately if we are to avoid major problems next year.  In actual fact those conditions are quite good for chub fishing with maggot feeders which was my current plan, so not too disappointed on that front.  I had of course brought along plenty of pellet and boilies to cover the chance of the river being high and coloured and they could stay in the van without a problem.  You have probably read the description of my chub gear many times but a quick summary is that it consists of a 12ft Drennan medium feeder rod with a 2.5oz quiver in use to suit the flow rate I’ve seen.  The 6lb reel line is more for casting the feeder than the size of fish, and this line is threaded through a Blackcap feeder, into the hole at one end and out of the ole at the other end.  This gives a very resistance free movement since I will be using quite fine lines for the chub going as low as 2lb if needed.  Experience has shown that using the swivel gives the chub the chance to break the hook link immediately on the take, the snatch bite off a chub can be quite vicious, and the friction through the swivel does not give line freely enough for the job in hand.  The size 18 or 20 Superspade hook will be used with line between 2lb and 3.2lb and kept short, about 2 inch is normally the length used so now I’m ready to fish.
The swim is a steady glide with the main flow running close to the rushbed along the opposite side of the river, I will be fishing close to that, but the chub know it’s there and that might present a difficulty.  I’ve brought along a fair supply of red maggots since I can always take home what I don’t use, fortunately I’ve a separate fridge/freezer for bait so no problem there.  Just as an aside remark, I was fishing on a commercial for the perch recently and as it got close to dusk a nearby fellow angler came along and asked if I wanted the maggots he had left.  There was well over a pint and he explained that his wife would not allow them in the house at all, meaning he had to get them on the morning of his proposed trip, and leave any remainder behind at the end of the day, it did bring home how lucky I am for my freedom at times.  Still, back to fishing and although I don’t need the ‘bait and wait’ tactics for chub I still use the bait dropper throughout the session.  Remember that the hemp is there to attract the fish from downstream and once they are in the swim you can cut down, or eliminate its use.  If the fishing starts to die off then by all means put it back on the menu.  Four drops of maggots are followed by an equal number of drops of hemp, in that order since I don’t want to spook a fish that came straight away to the hemp if that was put in first.  It does not always work like that but believe me I’ve seen chub make a 15yd dash upstream when hemp has been introduced, they don’t do that for the maggots alone. 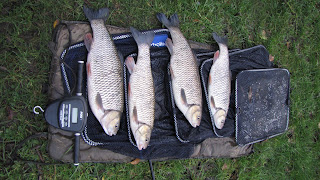 Throughout the day I took a steady stream of chub coming to net, I dropped four of them into a keep-net just for a photograph although I normally release them immediately.  I did loose one that broke me on a straight pull, he got close to those rushes and I held on, but the tackle was not up to the task and it broke that fine hook length.  I did try going on to my usual back-up plan of a 4lb Fireline hook link, but the bites stopped, these chub were just too canny to take that gear and I had to revert back to the mono again and take my chance.  No big fish landed but probably that was the one that got away – always another day though and I’ll be back to that spot to try again for round two. 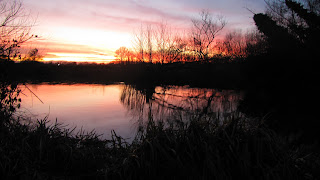