A trip to the Kennet [part2]

Back at John’s house following my day’s fishing for chub we discussed the possible venues for the following day.  My thoughts were for either perch or chub, while John fancied trying for a shoal of barbel he had recently found, to meet both ambitions was easily done, we went to the river length where the barbel were to be found, and I followed John’s suggestion as to a known chub swim. 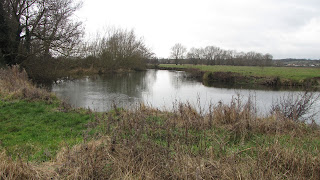 Although I have a number of club tickets for the Reading -Newbury area we were going to a section where I was not covered and John arranged a day ticket through the club secretary.  All nice and legal, we arrived not long after dawn and walked the length looking at various likely looking swims.  One of the problems with the Kennet is that there are just too many good swims, a big perch or chub could be found almost every 10 yards or so and decisions are so much harder than those lengths were one or two swims look good.  The swim indicated by John was almost one of the classics, a large bush hanging right over the river where the shallows dropped off into deep water.  I did say almost classic, the one slight problem was that the drop from shallow to deep occurred too close to the upstream edge of the bush to allow it to be fished from there.   Anyone who has watched a chub shoal will be aware that they can be amongst the most active of our coarse fish, they are forever drifting around their domain and I was quite confident that these fish would drift down into the pool and away from the overhead bush.  Using the same set-up as yesterday I baited with hemp and maggot as close to the bush as I could and felt it was just time.  One big difference was that there would be no way I could fish the fine line tactics in this swim.  Under the bush on the far bank was a tangle of branch and roots exposed by the low water levels but obviously going well into the water just waiting for the unwary angler to give the chub too much line.  The only concession I would need to make is a change of hook-link to the 4lb Fireline braid tied to the Drennan size 18 hook that I use in this situation.


Meanwhile John, fishing some half a mile downstream of me reported he had caught his first barbel of 2012, not a big fish but a good sign the shoal was still in place and feeding.  His tackle would be similar but with a longer hook-link and heavier rods and line, it is difficult to better maggots or caster in low, clear water conditions.  By 11:00am I was beginning to wonder why I was not getting any action, conditions were good and I was in a known chub swim but it seemed dead.  I bait dropped with hemp and although that method would not be used here too much I felt sure the fish would know the sound was a dinner gong – where were they?


Over the years I have been fishing I have had some very exciting events, battles with big fish and the sight of monsters in my landing net, the next five minutes would easily fit into this list.  The tip indicated a bite with just the lightest quiver; I struck and immediately dropped the rod to water level since if the fish moved upstream as I thought it would, I needed to avoid getting caught in the lower branches trailing in the water.  Sure enough this fish move up and I had the rod bent as far as it would go, past the 90 degree mark and all I could do was clamp down and hold.  This fish tested the tackle to the limit and the fine line would have parted in seconds, the braid seemed to be holding and I could feel the typical pull/ relax, pull/relax so often experienced of a fish trying to reach sanctuary in snags.  This stalemate was kept up for probably 3minutes or even longer and I was convinced that I had hooked one of the Kennet’s big chub.  Seven pound fish are a definite possibility and even an eight could be about – it seemed I had hooked one and as the minutes ticked by I thought I was going to land it!  For all this time I had been unable to reel in line, just hold and wait but now the pressure began to tell and slowly the fish came out and into the pool.  Still out of sight in the deep water my excitement mounted since now I felt sure I would land it, but then it came into sight and it was a barbel!   Talking to John afterwards he did not know of a barbel ever coming from that swim but now I had a fish of maybe 6lb laying in the net and my dream just evaporated.


Meanwhile John had taken another two barbel himself and then a phone call came to say he had hooked a better fish so I made my way down to his swim for a photo, it was not as big as he had thought, but although not a double it still was a pleasing best of the day for him. 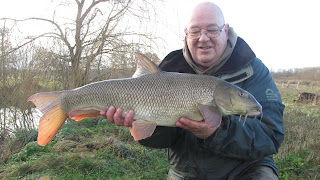 Throughout the morning I had noticed that small dust like particles were settling on my line, within five minutes of casting out the line would look like tow-rope and a little shake of the rod was needed to clear it.   About 1:00pm I phoned John to query if he had the same and he said not, but it turned out that shortly after that he began to suffer the same condition and his bites dried up, no more fish were caught.  I moved downstream to another swim but at the end of the day that sole barbel was my result, exciting, but disappointing as well.  Talking afterwards it turns out that there is a trout farm just up from where I was fishing and they had probably released a load of crap into the river.  With normal flow levels this has a limited result, but in these low water conditions it is known to sour the fishing for some time afterwards.  It was just my luck they would do it while I was there.


The last day of my trip we both did a little bit of exploring, it was a stretch that is known to hold big barbel and chub but my only fish of the day, a thin chub of about 4lb was the only sign of life.  I fished through to 6:30pm to allow the traffic to diminish and made my way home.  No big fish but a nice day with the chub and an exciting time with that barbel added to good company, it is always true that there is more to fishing than catching fish, this was such a trip.
Posted by Travelling Man at Sunday, January 15, 2012