Fishing over the Xmas break - success and failier in equal measure.

Well that’s the Xmas break over and lots of anglers are making their sad way back to the workplace.  It has been quite a mix of weather conditions but the start of the break saw very mild weather for late December, and I got out on Boxing Day in the hope of getting a late barbel.  Sitting on the banks of the river it could have been September and I basked in the sunshine waiting for the first indication.  It came as I was talking to one of the lads off a web site I visit on a regular basis, the barbel itself was not particularly big at about 5lb, but at this stage just its capture was very pleasing.  My fishing tackle was the usual arrangement of two rods with the end tackle being open ended feeders carrying mixed pellets and hemp along with a boilie on one, and two 8mm pellets on the other.  This time it had been the boilie that caught the fish, but a few hours later my wait was rewarded with another fighting fish of 6lb or so that took the pellet bait.  It would seem that often the fish just pick up bait that they come across in the wandering travels. 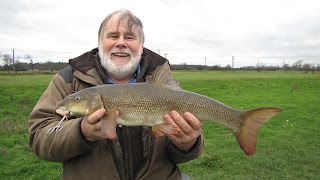 The next day I went to a local lake with Mervyn Wilkinson in the hope of catching a zander, still reasonable weather for December, but decidedly cooler in the quite strong wind.  The bait to be used was a mix of lamprey section on one of the rods and a small 4 inch roach on the other, we had both used leger tactics and similar baits, but whilst I just had a couple of pulls that did not develop, Mervyn caught a fine specimen of 8lb-10oz that had looked to be a certain double. 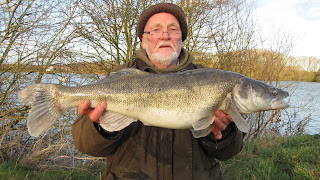 With the various thing that come up at this time of year I did not get out again until Xmas eve and I should have stayed at home, the river was right up and lots of rubbish was coming through making the fishing very difficult.  I did try for maybe three hours but in the end I gave up and left very disappointed.
I treated myself to a new pc tower and being a near total novice in these things it took me nearly two days to sort the transfer over from the old system of Windows XP to the new windows 7.  Even now I’ve still got problems with something called Active X and trying to find conversion leads for my traffic camera detector – an essential bit of gear that!  Still, I got out fishing again yesterday, 2-1 -2012.
It had gone quite cold with a near frost overnight and the forecast of a maximum temperature of 5C, but fortunately the wind was more of a gentle breeze so the chill factor was kept to a minimum.  With the sun breaking through the clouds occasionally, it was indeed nice to be on the banks.  It seemed that lots of other anglers had been cooped up for too long as well, and with ten or more people about it was by far the most I had seen on a river bank for a long time.  The river itself had dropped by a couple of foot from those conditions that had beaten me on the Saturday, and once fishing I could confirm that the rubbish had lessened as well.  Still plenty of dead leaves to catch on the line, but at least it was now manageable.
I thought the chance of a barbel was less than 50/50 and reports from other anglers confirmed that the big drop in temperature had indeed caused the fish to retreat to their hidey holes and nothing was being caught.  Today I had resorted to my favourite Dynamite Monster Crab boilie on both rods, heavily glugged I thought that the scent trail would perhaps encourage a fish to at least try, just like the cherry on the cake –irresistible!
As dusk approached I had already made up my mind that I would not stop into dark, the temperature was dropping fast and my hopes of a fish were dropping just as quickly.  I was again talking with a fellow angler when at last that boilie did prove irresistible to a barbel, one of that species had to be responsible for the bend in the rod, and with the fishes own power increased by the additional floodwater I got my days sport in the extra fight the barbel was able to give.  With the slippy banks left by the high water, both the fellow angler who was netting the fish, and me, nearly ended up in the river, but at last it was in the net and safe.  At 8lb-14oz not a monster, but a very pleasing start to 2012 and I retired from the river well pleased with the day – now what will the coming year bring? 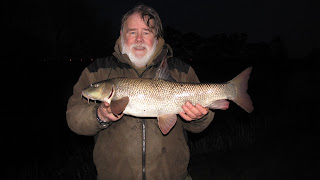