It was cold and frosty when I set out on the barbel trip, I knew the odds were against me, but the call of the river was too much to ignore.  This river, and more particularly the section I was to fish, had produced a very big barbel in recent times and my thoughts were that it just might go over that magical 21lb, but perhaps that was hoping for too much.
My tackle was set as had been used on recent visits, 12lb main line on 1.75lb test rods.  The open-ended oval feeder that would be loaded with a 50/50 mix of small pellet and hemp.  A 12inch hook length had a size 8 hook with two 8mm pellets on a hair and this was cast into the know deep hole where the big fish was sometimes to be seen. 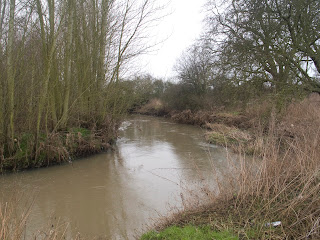 There are big barbel in small rivers.

Darkness fell and the beta-light glowed in the darkness as the rod itself began to twinkle with the frost that had settled on its surface.  Wild life could be heard all around my fishing position, perhaps a fox or deer went past just behind the swim, an owl hooted its call for a mate, but no answer came to the plaintive cry.  Stars stood out clearly in the blackness of the sky with no light pollution around to dim the effect and I waited – hoping for just that one special bite.
Then out of the blue as is normally the case the rod slammed round as a fish tore off downstream, I stuck and immediately knew that this could be it!  The fight was spectacular to say the very least and several times I thought I had lost him, but after some considerable minutes I looked into the net and there lay the biggest barbel I had ever seen.
I heard a voice behind me and turned to see who had spoken, but no-one was there, then I saw it was daylight through the bedroom window and with a sinking feeling I realised I had been dreaming!
Hopefully over the coming year my dream will come true, but until then I would like to wish you all a Happy Christmas, and may all your dreams come true in 2012.
Posted by Travelling Man at Saturday, December 24, 2011