Before last season there was just one water, Willow Pool in Oxfordshire, where the odds of a 3lb roach was more than a remote possibility, now there is a water that exceeds even that prolific venue, Lochnaw Castle.  The ultimate size has yet to be proven but number wise it definitely has the edge when it comes to 3lb plus roach being caught.  My latest visit at the end of April running into May coincided with the one year anniversary of its first paying customers last year, a hell of a lot of 3lb roach have hit the bank since then but even so our group of four anglers did set a new record for the venue but more of that later. 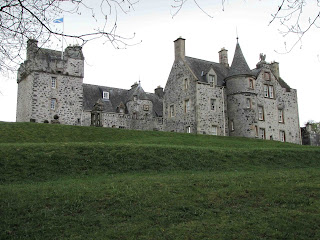 Not a bad place to call home.

I had hoped to be on the water at a time of good weather with the fish having been feeding hard ready for their spawning that usually occurs towards the end of May, of course that went by the way.  This spring has gone missing and fish are only just beginning to get going seriously and I would think that they could easily be three or more weeks behind their normal timetable. 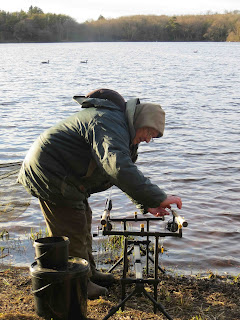 We arrive at the Loch about 3:00pm and once the car’s contents are unloaded into the lodge we can prepare to get set up fishing.  There are only four anglers allowed on the water at one time and bookings are made for Saturday to Saturday.  Our group of four had to be modified when Warren Gaunt dislocated his shoulder with just two weeks to go.  He tried to convince himself he would manage but the specialists made him give in to the inevitable and a replacement was found in the short time left.  That replacement angler was John Osborne and he joined Wyn Jones and John Found to make up our party of four anglers hoping to catch monster roach over the following week. 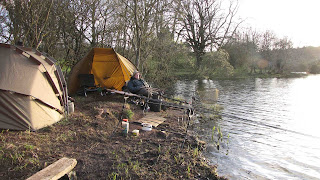 Now we are ready.

With the period of evening going into dark being a prime time for roach both John and I were keen to be fishing by early evening and sure enough our baits were placed out into position before 7:00pm we only had to wait for action.  There had been a lot of work carried out over the winter months in new swim creation and we had taken advantage of that by fishing almost the opposite end of the 48 acre loch from our previous successful swims.  It did not take too long before I had a smile on my face when after just 30 minutes I landed a 2lb-11oz specimen which had picked up my boilie.  Our hopes were obviously high, but it was not to be quite as easy as it seemed just then. 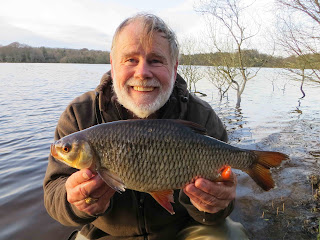 Previously the weed had been a major problem but with the late spring it was not too bad and no dragging had been required.  Our tackle was as previously used, I’ll describe mine and the others would be very similar.  Two Drennan 1.25lb 12ft Avon rods were matched with a pair of Shimano 5000 baitrunner reels.  My main line was 18.5lb test Awa-Shima Reflector, a line I’ve recommended before.  This line has proven quite successful in the you can work in thirds, the stated breaking strain is wrong by one third so this was the equivalent of 12lb line, but the diameter is equivalent to one third of the stated breaking strain and hence comes out a 6lb equivalent diameter.  I would be using a maggot feeder on one rod and a flatbed method feeder on the other obviously matching the baits to suit.  The maggot feeder was straight forward in that it was my usual short hooklink helicopter style rig with the hook just clearing the attachment to the feeder.  The flatbed was again a short hooklink but working as is normal with this system as an inline feeder.  Method mix is placed in a mould on top on the baited hook and this then presents the bait on top of the feed once it lands with the leaded base on the deck.  Hook links were 4lb fluorocarbon to a size 12 Kamasan B980 pattern hook.   I had used the Spomb to place a minimal amount of feed into the swim, maggots a few 10mm boilies and a little method mix just to try and tempt the roach to stay once they arrived. 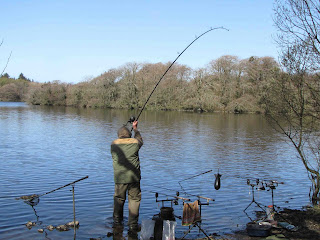 Laying the table for tea time.


So with a big roach early in the session we thought the evening would bring more specimens but that was not to be, although we caught lots of roach they topped out at about 1lb or so.  I was up for dawn the following morning, the rods having been fishing through from the midnight retirement without an indication.  I had changed the maggot bait for a boilie and now I changed back again catching small roach up to about 7:00am when the sport as such ceased.  John Found had stayed fishing until midnight when he called it a day and retired back to the lodge, as with previous trip to the loch he does not camp overnight preferring to make use of the bed provided in the lodge.  He came back at around the 7:00am time and missed what sport there was to be had.  A pattern developed where we fished through to about 2:00pm and then went back to the lodge where a shower and toilet was available to freshen up.  We also got into the habit of having our meal at this time since all the needs for cooking were available and it was so much more easily done leaving the evening for fishing.
We were to spend most of this week in quite strong NW winds that proved to be quite cold if you were exposed for just a few minutes.  Fortunately it did stay dry for most of the break though a couple of heavy rain storms came through towards the end of the stay.  It was frustating to sit there in the cold and wet listening to the radio report of people in shorts and sunbathing in the south of the country. 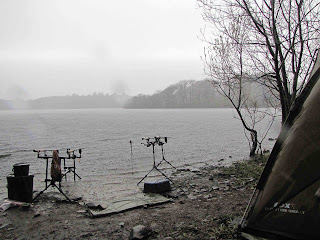 It was wet at times.
We began the evening session but it seemed quiet until about 7:00pm when yet again the small fish came to the maggot feeder rig, this lasted until perhaps 10:30pm when they all but stopped and I changed the maggot rig back to boilie for the night.  John had just begun to tidy up his tackle as a prelude to retiring when my bait was taken by an obvious better fish.  The smaller roach had be jigging about with the bait giving a rise and fall on the indicators, this time the bobbin went to the top and if I had not struck the baitrunner would have started to give line.  Yet again the rod bent over in a battle curve against the large fish and as it came into the torch light we saw that it was indeed a good one.  In the landing net I suggested it could be a three but when John seemed to hesitate while looking at the scales I thought it would be under.  Once he turned the face to me I could see I had equalled the 3lb exactly that had been my best fish on the last trip.  He said the reading had been flashing between 3lb and 3lb-1oz before settling on the lower figure. 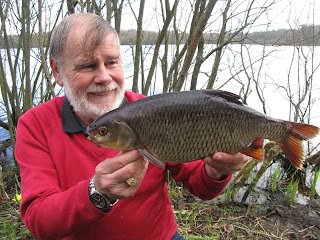 At 3lb it equals my previous best from Lochnaw


The following day arrived with no more action until just before we would have left the swim for out dinner John finally got his 2lb plus fish, a long lean fish that would surely have weighed far more if it had not been for the cold spring.  The next 24hrs passed without any sign of a weighable fish so we decided to move swims and this was soon done to leave the evening session available after a small amount of bait had been Spombed out before dinner. 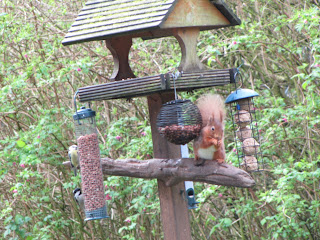 I've got to have a look at the red squirrels. 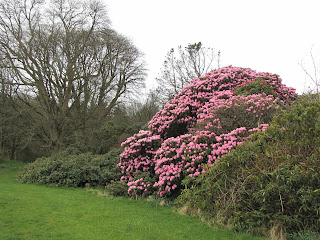 The only colour on the whole estate with late spring. 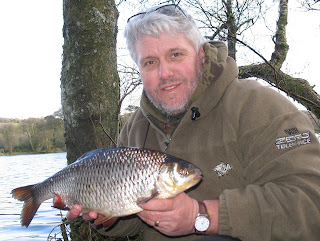 Best fish of the week, Wyn with his 3lb-2oz pb.


The larger fish seemed to take our baits yet again and the two other lads were still waiting to catch their first 2lb specimen but that changed just before dusk as the radio crackled into life to tell us that Wyn had caught a 3lb-2oz personal best on his maggot feeder rig.  A great result, but again this was the only good fish of the period through to the next dinner time.  We had hoped for good sport but the fishing was proving to be more difficult than anticipated though with two three pound fish it was not all bad news.  That evening proved quite successful with a 2lb-10oz fish to me and John Osborne opened his account with two fish of 2lb-8oz and again a personal best of 3lb-1oz. The fishing continued like this through the remainder of the week and with just an hour to go before John Found would pack up for the night and not fish again he got his reward breaking his personal best roach of 3lb with an extra ounce to give 3lb-1oz. 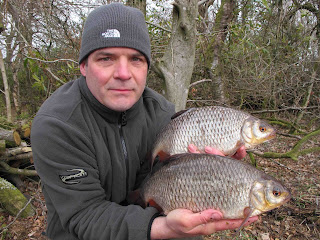 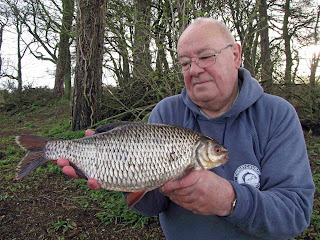 Kevin the head bailiff informed up the in the one year of being open this was the first time that all four anglers had caught a 3lb roach within their weeks fishing.  I would think that Willow will have matched the four 3lb roach achievement in a week but only with far more than the four anglers fishing at the time.  With 48 acres of water and just four anglers fishing I think that there could easily be a big surprise waiting to be caught.  The largest fish taken so far is one of 3lb-13oz last November, that well might be beaten and only time will tell but whatever happens Lochnaw will go down in the records of history as a roach venue supreme. 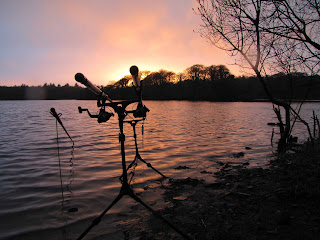