With the late spring everything is topsy-turvy, but already it is time to try for the big crucians.  Generally my tench fishing so far along with many other anglers that I know of, has been rubbish so I'll leave that for a couple of weeks and move on.

The swim I've chosen for the start of my campain is quite shallow being less than 2ft going out to perhaps 4ft at 30 yds or so, for this reason I shall be legering for only the second time as my primary method for the cruians, the last time I caught the British Record.

My tackle is a pair of Drennan 1.25lb 12ft Avon rods matched up with Shimano 5000 baitrunner reels loaded with 6lb mono line.  The flat bed method feeders are tipped with a short hook length of 4lb florocarbon to a size 14 hook, the bait being either soft pellet or sweetcorn.  I'm sure it is a fact that very few crucians would get caught on a running leger so a bolt system is used for this reason.  you only have to watch a crucian bite on a float to see my reasons for this though, cunning does not begin to describe these delicate biters.

The weather could have been better with a chilly SW wind blowing strongly into my swim, I just hoped it would blow the fish across in the same way.  I intended to fish my usual 48 hours over two nights and the first afternoon did not bode well with just two tench and a medium size rudd coming to the net.  Meanwhile crucians were being caught, in one anglers case a lot of crucians but I could only ring the changes on rig and bait then hope the fish would appear in my swim.

In the end I did get one golden bar of 3lb-7oz along with a lot of tench to 6lb plus, it seemed the crucians were shoaled up in different areas and I could only hope that my next visit would have more success. 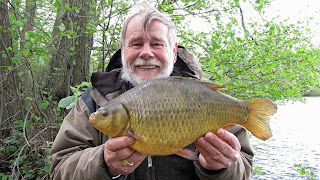 First crucian of the season 3lb-7oz.
Posted by Travelling Man at Thursday, May 16, 2013