Back to the tench.

Having caught a few nice crucians last week and with a bank holiday coming I decided to go to the local tench water which was likely to be less crowded over the weekend.  The tench do seem to be well behind in their development as previously mentioned, even now the reports are that they are very patchy on the local water as to whether you catch a lot or none.  My first day’s effort proved the point where I had a very poor result of just one lost fish to a hook that opened up, while a lad in a nearby swim had ten tench and two bream.  I had run through a large range of hook and hooklink combinations along with bait changes to try and improve tmy catch all to no effect, there were just seemed to be no fish in front of me.
The next day I returned to the lake and although I thought the attendance had been low on the first day with just two other anglers on the water, this time I was alone.   With good weather and a bank holiday – I was amazed at the lack of interest on the bank, you only catch if you go out and even a blank day on the bank is better than sitting in the house watching the telly all day.   Still I had started quite early in the morning and was beginning to think another blank was coming my way when about 10:00am I got two fish at the same time.  Just like busses I waited all that time and the second rod went while I was unhooking the first fish, interesting at least. 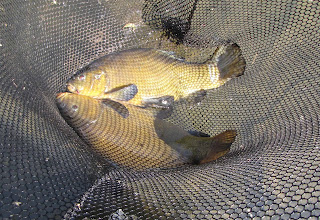 I thought I was going to have a few fish following that double capture, but it was a long wait until the next fish came along and then a wait again after that before the next one.  I finished with a pleasing five fish to a best of 6lb-6oz, nothing to set the world on fire but a good session back on the tench scene. 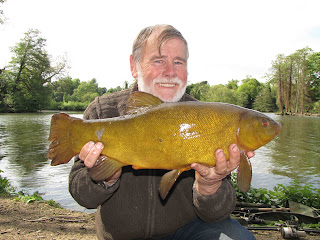 The tackle in use was similar to that used for the crucians, 1.25lb test 12ft Avon rods, 6lb main line and 4lb braid hook links to size 12 hooks.  The bait was sweetcorn and I used the flatbed feeders to present it along with the usual short hook link allowing the baited hook to be inserted into the mould along with the method feed.


Today it is quite miserable with constant drizzle forecast to be going into dark, even the local ring neck doves have had enough of our so called summer weather and they sit there waiting for the sun to show again. 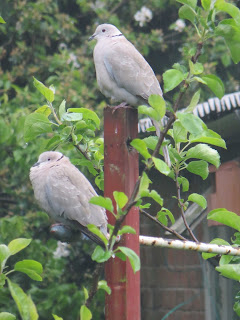 The same as many of us - fed up and waiting for better weather.