Spring is a great time for the serious specimen fisherman and although it arrived late this year it did come and the big fish have come with it.  As a general rule we measure our success by the weight of the fish we catch and the location the fish is caught from, I’m lucky in that I can afford both the time and the money to travel to distant places others have to fish locally and hence catch mostly smaller sizes of fish.  It is an undeniable fact that to succeed in catching specimen size species across the range to need to travel.  Lots of anglers are fortunate in that they live near to venues that hold big fish but even these will need to travel since it is unlikely that there are more than two or three of the species locally that are of specimen size.  Of course living in the south of the country gives the angler a big advantage over those in the north both in the general size of fish available and the number of venues holding each of the different species.  That is not to say that they are not available in the north but there will certainly be less of them.


If I could move to say the western end of Kent or into the Colne valley area, the Kennet region or the Ringwood area it would be perfect.  All these would reduce my need to travel and put venues with specimen fish local to me that I could fish for a few hours in the evening without breaking the bank to get there.  I would still need to travel since many of my chosen venues would lie outside those areas, but the difference would be significant.  I now class anything less than 50 miles as local and rarely fish at less than 20miles.  Many anglers never travel more than 15 miles and even at that they feel they have gone a long way, suggest 50 mile to them and they think you have gone mad.  Unfortunately that is how it is so I travelled the 125 miles down to the Johnson’s Lake on the Marsh Farm complex yet again to try for the elusive 4lb crucian that is one of the targets for this year. 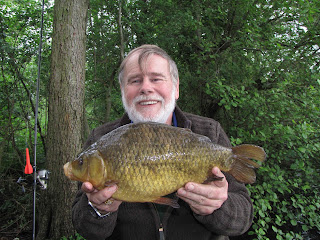 With the late spring it appears the tench fishing is way behind and I think I still have the chance of the very big tench for some weeks.  Unfortunately I’m sure that, one of my crucian catches on the last trip was a repeat capture after spawning, 3lb-5oz the first time and 3lb-1oz the second but that fish had definitely spawned.  This trip was a gamble, we had very nice and sunny weather over the previous weekend, it was almost certain that the fish will have spawned but just maybe one or more of them will still have the weight and will be that little bit behind, I thought it worth a chance. 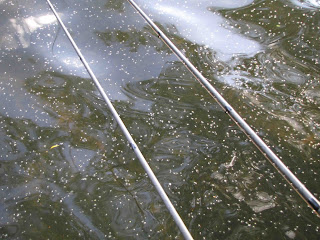 Willow herb off the trees just begining to cause problems.

I arrived to find the bank empty where previously it had been packed out with expectant anglers, there was just one angler on another bank and he seemed to be catching tench, lots of them and they had not spawned.  By now it was about 10:00am and by 11:00am I was in place with rods out fishing ready for the next fifty hours or so although I had already got it in mind that I could pack up early if things were not going right.  I mixed up some method and send out a few Spomb loads to give a feed area for the fish and I did not wait long before the first tench was heading to the net.  Although the venue can do a nice fish of 8lb or 9lb they are very rare and the majority are between 2lb and 5lb, this one was perhaps 5lb and in good shape, not yet ready for the spawning effort soon to come.  Not long after that I got my first crucian and it was spawned out but at 3lb-10oz it left me wondering just how big it had been the previous week.  With the damage on the tail you may recognise it as one of your captures, let me know if it is. 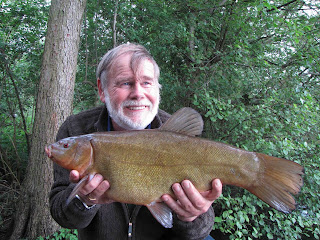 
As the day went past the bank filled up with arriving anglers and I continued to catch both tench and crucians to specimen sizes.  By midday on the following day I had quite a catch with a 30 fish total, 17 tench and 13 crucians with five of the crucian over 3lb.  Included in the catch was two tench over 7lb the first of that weight I’ve had from the venue so a pleasing result but still not what I was after.   With the best three crucians at 3lb-10oz, 3lb-9oz and 3lb-6oz they were fish I was very pleased to catch, but they were all spawned out and I felt my chance of the 4lb fish had gone so as strange as some might think I decided to leave and go after the big tench elsewhere.  For me just catching fish is not enough, I need to feel the extra big fish is available and that bit of the equation had gone on this venue for the moment, but I’ll be back in the autumn when they will be back to their normal weight and a 4lb fish is a possible yet again. 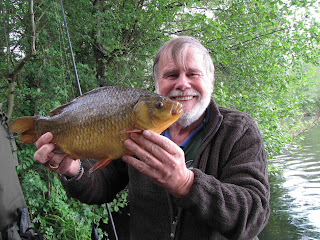 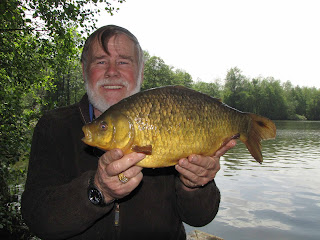 The best photo of the crucians and 3lb-6oz.

Returning home meant I could go to the local tench water, just over 30 miles away, and try for the big tench.  Here ‘big’ means 9lb plus with a very slight chance that if I could catch the right fish on the right day it might be a double, but on the way to that target I could hope for a couple of 7lb or 8lb fish.  It appeared that they had at last turned on and sport seemed a bit more consistent compared to that of late.  I fished for the day and ended with two tench and a bream, none of which went over 5lb but even though I know I would have caught bigger tench at Johnson’s I still enjoyed this session more that I would have there. 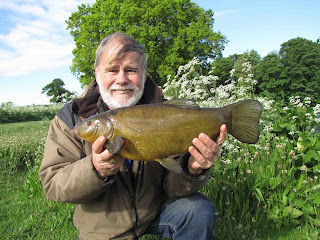 A perfect Spring photo of a medium tench 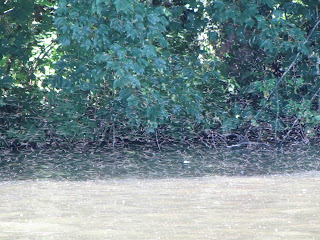 Two things can spoil the enjoyment of fishing for me.  The first is it becoming too easy, the other is where there is no chance of my target fish on that venue.  I have packed up when catching big fish on a number of occasions when it became obvious that I had found the killing method at that time on that venue and the fishing was easy.  I could guarantee the next fish and the one after that, so to me it was no longer sport.  The other point is just my quirk – I want to catch nationally big fish and although I will fish waters where I’m not sure they hold such fish I prefer at least an outside chance that such a fish is present.  Just as an idea I’ll mention some of the weights that I need to feel that there is at least the chance of catching, double figure bream, barbel, and zander, 2lb roach and 3lb perch, 3lb crucian and 20lb pike, 50lb catfish and 30lb sturgeon though I like to think even bigger for this species. I don’t fish for carp but I’m pleased to catch the occasional 20lb specimen on finer gear intended for smaller species.


This blog has rambled a little but I would be interested in your thoughts on what I’ve said, how does it reflect your ideas and fishing?