Tench, bream, barbel and eels but only one of them caught.

My poor catch returns continue, but to some degree they are self-imposed in that I choose the venues to catch a fish I want to catch rather than just catching for the sake of it.  At the moment it seems that our sport is generally at a low ebb, of course some of the thousands of anglers that have been out will catch good fish, but a tremendous number did not with me amongst them.   As the Glorious 16th approached I considered if I would have a go on the rivers, there are many to choose from and some offer a better chance of catching than others.  Probably if just catching a barbel was my criteria then I should go to the Trent, but I wanted to catch a fish that would mean something to me so I went to possibly the worse choice I could make – the River Tame at  Tamworth. 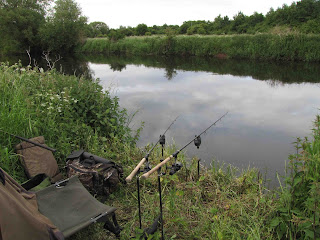 My swim on the River Tame
I have yet to catch a barbel off this river though I know they are there all be it in very low numbers, at least where I fish.  This season I would hope to increase the number of rivers where I’ve caught a double figure barbel from, currently at 23 rivers I am going to target four more, the Tame, Nene, Ribble and Goyt.  I could catch on the first trip to each or totally fail on all of them, but that is the challenge and the fun of my quest.  With just a few knocks off chub the first trip was the first of many blanks I shall probably experience, but the satisfaction of success should it come will be far greater than just catching another barbel for the sake of it.


My tench / bream efforts suffered another blank as well, again the choice is more for quality than quantity but even the local tench venue is not doing too well at the moment going by reports I’ve had.  Along with most of the lakes in the Colne Valley my current choice does contain the potential for very big ells and this year I will be trying to improve my 6lb-10oz pb.  With a third rod out just in front of the marginal rushes I did manage my first eel of the season, at 3lb-9oz not a monster but a start. 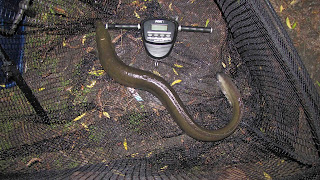 A pointed head on a worm eating 3lb-9oz eel. What's in a photograph?
They say a photo is worth a thousand words, and the photo above needs a few to explain just what you are looking at.  The photo is a shot of my swim on the London Lake and I’m fishing three rods, two for tench and a third for eels.  The swim itself in a bay off the main lake which is about 100 acres in extent and my thoughts were that the tench and bream might have moved in ready for spawning, if they did the eels would follow for the feast on their eggs.


The water surface is covered with willow herb seed heads, a pain in the backside in that they are very difficult to remove off your line and can in extreme conditions jam the line when trying to reel in.  A good reason to use rods with large rod rings at this time of the year, a quivertip or match rod would not survive an hour of this.  My torch can be seen hanging off the back of the rod rest, though I normally sleep with one around my neck as well ready for action in the depths of darkness.  The second torch is just in case the first fails which I’ve had happen so I cover the possibility of it happening again.  You might have noticed the catapult laying on the floor and thought this was for putting out bait, but it’s not, a closer look will show a few pebbles lying next to it.  A family of coots had found my nearby baited area with easy pickings and they were making my life difficult.  I am not worried about the little amount of food they might gather but more that I would eventually hook one of them and the ensuing problems.


The blue bowl covers my method mix and groundbait against both possible rain and little creatures that might have come during the night, the maggots tub has casters in water ready to go into the swim at regular intervals and the smaller container has hookbait for the second rod, a mix of corn, pellet and 10mm boilies so I can ring the changes over the three days I’ll be here.


The more observant of you might have noticed the two handles in the photo without apparent use, one on the right going into the reed bed and one on the left going out of picture.  These are in fact the two landing nets.  I try to avoid leaving a net where a rat or such like can get trapped in it and usually bite their way out.  This means leaving the head of it held in a nearby tree or rushes.   The net on the left is one of 50inch and its next to the eel rod,   Eels are sods that only need the tip of their tail to be outside the net and they are back out again in no time.  The other net is more like 40 inch and it is much more manageable for the smaller and more cooperative tench and bream.  Lastly the unhooking mat still folded up tells its own tale; I had blanked up to this point.    Quite a few words to cover a simple photo just imagine if I had included the camp in the shot. 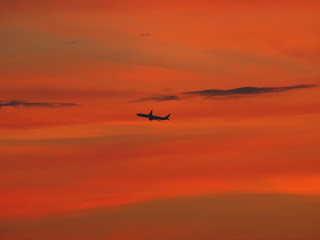 Holiday makers set off into the sunset. 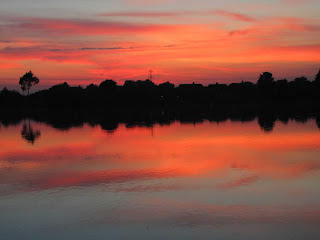