Giant bream and even better crucians.

The following couple of trips after the capture of the 13lb-8oz bream reported in the last blog I was just day fishing and I caught a few perch but no sign of the bream.  Then that good luck factor came in again and the next bite, mid-afternoon on a sunny day, I got a bite typical of bream, the bobbin dropped and then slowly rose again and the fight certainly suggested it would be a bream although with the power it would be big.  Sure enough it proved to be just that and the lad from the adjacent swim confirmed a weight of 15lb-4oz, yet again the target set and achieved. 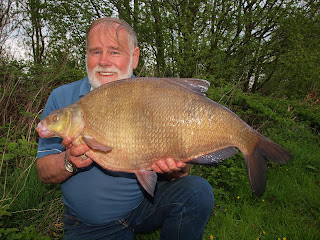 It was now fast approaching the 1st of May and the club water well known for its large crucians would become available for fishing again having been closed for six weeks.  Plans were made and I arrived on the evening before only to find the place already packed out.  I dropped into a small out of the way swim prepared to wait until a better choice became available and since anglers are always coming and going to their own personal timetable I got my chance midmorning next day.  The rules only allow the anglers to stay for two nights and then they must leave for a minimum of 24 hrs. Though this can be awkward for the travelling angler I’m in total agreement with the rule since it does allow swims to become available on a constant basis with no long term occupation of good areas.  I stayed in the swim for 36 hrs, but with no success so I moved to the opposite end of the dam to try a totally different area.  The results around the lake were generally very patchy with a blank or one or two fish the normal catch, one angler did very well with 15 crucian to a best of 3lb-13oz, but amongst the other anglers fish being caught were odd specimens of 4lb plus including samples to challenge the current record of 4lb-9oz held jointly be myself and two others.   My  move proved to be worthwhile when I caught a succession of tench to 6lb-11oz and two crucians of 3lb-6oz and 3lb-12oz a fish equal to my best for the venue, then I had to leave having reached the end of this session.. 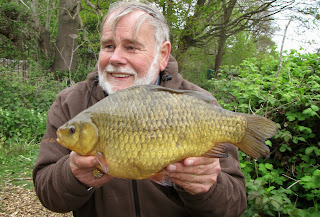 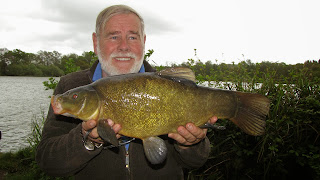 My tackle and approach would be the same throughout my sessions here, two 12ft 1.25lb Drennan Avons were matched with Mitchell 300’s loaded with 6lb line going to flatbed method feeders.  Very short hooklink of 4lb Fireline with Kamazan size 14 hooks carried a single artificial caster on the hair rig.  I would use one pint of caster per day along with a similar amount of 4mm pellet put out with a Spomb at regular intervals, this to allow for the tench and rudd that invariably would be cleaning them up.

My next three day session proved equally as difficult with the first day and a half almost totally blank so again a move to a different bank altogether.  Yet again the same potential record fish came out and again I was called on to witness it but I also saw a 4lb-2oz fish caught in the swim next to mine this giving me some hope and sure enough I again caught two crucian of 3lb-2oz and 3lb-5oz along with another load of tench to 6lb-9oz.  All the time I’m getting reports of lots of blanks but the average crucian being caught is up from last year by perhaps 4oz and that gives the chance for a good number of high 3lb’s plus fish into the 4lb range. 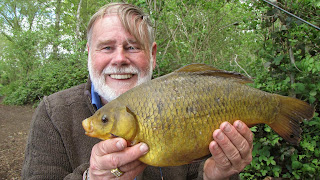 Again the 130 miles back home to recharge the bodywork and I’m back again hoping to beat the time when the crucians will spawn, last year I only got one trip and by the time I returned they had spawned.   Dawn saw me walking down the bank to find a vacant swim and I soon had my tackle in place and cast out.  There was quite a strong wind blowing into the bank and the wind chill factor made it quite cold until the afternoon when the sun got past the surrounding tree.  Fortunately the cool conditions did not stop the crucians and at about 11am I got one of 3lb-11oz to give a very pleasing start to the trip.

When fishing you never know what is waiting just around the corner and at just after 2pm I finally got my long await 4lb crucian, this one weighing a very pleasing 4lb-6oz to make the previous effort on the venue well worthwhile.  That said fate was not finished with me and just a couple of hours later I was calling Mark from the next swim again to confirm the weight on his scales and  photograph a magnificent sample of 4lb-8oz to give me the best confirmed brace of crucians in the country. 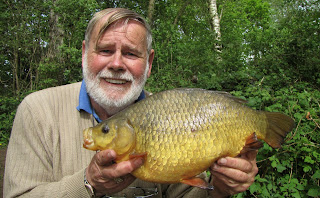 4lb-6oz smaller of the brace. 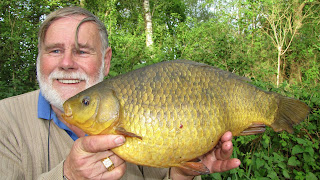 4lb-8oz larger of the brace.

The following day I topped the catch up with a 2lb-13oz and yet another big fish of 4lb-2oz though after that fish the next 30 hrs were dead but Of course I did not mind that, yet again target set and achieved. 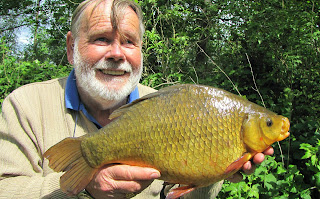