At 4:30am Sunday morning I was wondering if I really wanted to go pike fishing on a boat at Chew Valley, my early start days have never been good and with the passing years they have got even less interesting.  Still the boat was booked and paid for, and John would be travelling from the Oxford area to meet me there and since I had the tickets, I had got to go!


For me the 115 miles are fairly good being an easy drive mostly on motorway, the Tom-Tom system makes the smaller lanes at the far end more easily accommodated, but one thing did bring home the need for attention when driving.  The rain had started about Tewksbury and just got heavier as I went further south, by the time I was travelling through Bristol it was a definite downpour.  The roads near Chew Valley are only just able to take that name, they are more like little lanes, often one way, with a hedges or stone walls to confine you and give a slight case of claustrophobia.  Driving along the lanes there were little rivers of floodwater travelling down any slope and then out of the blue, I drove into a river!   At least it seemed that way when the front of the van disappeared into a spray of water where the rain had collected in a dip in the road to a depth of two foot or more, my speed got me through it but it also definitely woke me up.


I arrived at the lake and with the rain still falling so I sat in the van waiting for the club house to open, they do a nice English breakfast here and I would have one to set me up for the day on the water.  Then to crown it all it began to snow, just a few flakes at first but slowly it developed into a proper snow storm and looking out over the reservoir I really did think I was in the right place at the wrong time.  Fortunately I did not have to decide whether to venture out since by the time the 9:00am start came the snow had stopped and although the was a little drizzle still going it was ‘now let’s get out there and catch a thirty time.’ 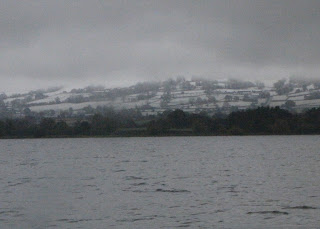 Snow on the hill on a gray, misty morning.

With a mist over the snow laid hills around us, we travelled across to Wick Point our chosen starting position.  Fortunately John had better information than I had, and although not recent knowledge he knew that the pike were still in the shallow water rather than what I would have expected being cold and I would have gone for a deeper choice.  Discussion with other hopefuls in the lodge had indeed shown that this season the lure fishing had been poor and the lodge bank, normally first choice, was not producing the goods.  Knowing what was going on it came as no surprise when nearly all the boats also made their way to the far bank, but plenty of water so that when we finally settled the nearest boat was some hundreds of yards away. 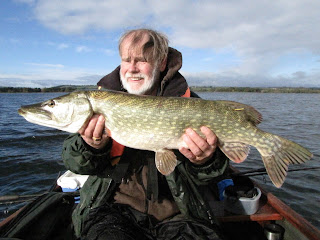 My Chew double, note the tag near the dorsal fin.

We soon had four rods out with a mix of mackerel, herring and sardine baits in use and it was not too long before we had evidence of fish in the area.  Trout can always be a problem when fishing for pike on a trout reservoir, but when they go 5lb or 6lb a time it is still an interesting fight which we had several times over the course of the day.  The first pike came to my rod and when weighed it went 13lb exactly, not the size we hoped for but it did show that there were pike in the area and that is always a good thing.  Throughout the day we continued to get the mix of sport, trout and pike ending with three doubles and lots of trout.  John took the prize for double with two of 11lb-10oz and a second of 12lb but that big fish evaded us again, maybe next time. 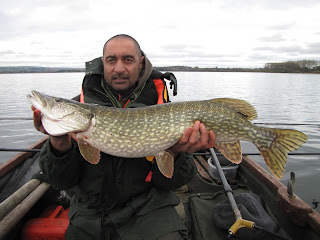