Of birds, books and pike.

As a few of you will know I was one of the founder members who met at Upton on Severn all those years ago and started the Barbel Society on its way.  This year it was decided that the Society would produce a book to celebrate the barbel and its high place in the specimen fishing world and the contribution the Society made to that position.  I was very pleased to accept a position on the small subcommittee that were tasked to bring the book to fruition, my particular task took advantage of the fact that I’ve already produced two books of my own, Magic Moments and the current, Targets Set and Achieved.


This week with the weather being decidedly poor I have taken the chance to bring the book material up to date and ready for Martin Mumby to get on with his part of laying out the material in final book form.  We know he does a good job of this, bringing all his skill into play, he in fact did my last book for me and I was very happy with the result.


The plan is to use a mix of articles that have appeared in the Societies magazine, Barbel Fisher, and have an equal mix of invited guests to produce current features on their own view of barbel fishing.  Well known guest writers include Dean Macey, John Wilson, Len Arbery, Rob Swindells and many others.


It is the intention that the book will be produced to the highest standard and will be in the order of 300 pages and 100,00+ words, as with most modern books there will also be a wide range of photographs to illustrate each chapter.  The book will be launched at the Barbel Society Conference next June and details of ordering can be found on their webpages at http://www.thebarbelsociety.co.uk . 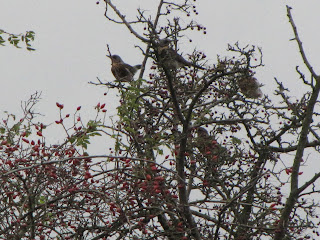 Fishing wise I’ve done just one trip and that was an unsuccessful trip after pike.  I did get to see a large flock of fieldfares collecting the red berries of the bushes that ranged behind my swim, there must have been in excess of 100 birds, but lots of berries so no problem.
Posted by Travelling Man at Friday, November 02, 2012