Well as you will know it’s been a wet and windy week, I tried pike, perch and roach fishing with varied success, but at least it has been fairly mild for November.  Going by the different weather forecast pundits we are going to have an ice age winter or a repeat of Noah’s Ark, this being the case I’ll expect a fine, mild and dry winter since they never seem to get it right even for the next day.
On Tuesday I went pike fish and although I never set the angler press lines buzzing I did get three jacks on various deadbaits, mackerel and sardine; probably that’s because that is what I had on the hooks.  I think we often put too much emphasis on the bait, where-as the fish just find food and take it whatever it is.
On Thursday I travelled south into the Kennet Valley with plans to fish with John Found for a couple of days and then one day on my own since John had plans to attend a book launch for Pete Springate’s new tome. 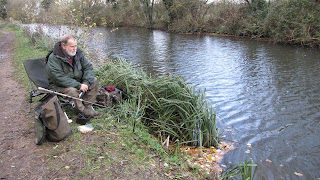 Perch fishing on the canal section.


With no need for an early start I met John at the car park on the Kennet and Avon Canal at 11:00am ready for the day’s sport after the big perch known to swim in the area.  For those not familiar with this region but thinking they might like to try it out, then the Reading and District book give dozens of miles of both river and canal fishing along with numerous lakes.  The name says it all in that the river and canal flow side by side over the distance between Newbury and Reading.  Often they have separate waterways, but just as often they join and run as one until the next weir and they go their separate ways again.


John had identified a couple of swims where perch were caught and I dropped into one of these for the afternoon.  Although this section of canal can often have quite a flow on it, there seemed little movement today as there were no boats on the move.  The swim itself was a section where the far bank had overhanging brambles which gave shelter to the fish keeping the boats away from the bank.  Fishing with a pole would be the ideal since that would allow you to go into quite tight spots and place the bait right against the bank but casting had its obvious problem of the slightest misjudgement going into the brambles and possible breakage. 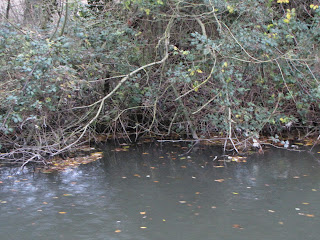 
I chose a slight hollow where the brambles formed an arc and at least I had a few feet to play with although I still hit the brambles on one occasion and was lucky to get the tackle back intact.  The tackle was an open-ended feeder, fished paternoster style with the size 8 hook on 4lb fluorocarbon line attached so the hook hung just above the feeder when I was ready to cast it out.  With the rod held vertically in front of me and a pendulum style swing away from my body directly at the chosen spot for the tackle to land was the way to hit the swim with regular consistency.  Casting with the rod held to either side and then a swing towards the swim will end up in disaster, a split second error in releasing the line from the spool sends the bait to either side of the intended spot and the waiting brambles just say ‘thank you very much’ and on most occasions they keep your free gift to them.


My hookbait was a lobworm and within the feeder was a mix of casters, chopped up dendrobaenas, and prawns all held in a light method mix.  A dozen casts at the beginning of the session soon had a bit of feed laid down to attract the perch if they were in the area.  I waited about an hour for the first bite on my quivertip and hooked a nice fish only to have it come off the hook about half way back to my side of the canal.  Disappointing but at least there were fish feeding.  Over the next few hours I took two others of 2lb-4oz and 2lb-7oz as well as missing a couple of bites, but that will often happen with lobworms as bait.  An interesting start to my break but what would tomorrow bring? 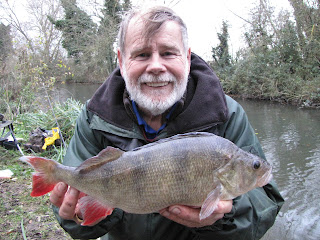 
For the Friday it was arranged that we would visit Dave Steuart’s section of the River Test again in the hope of a big river roach.  With all the current rain in the area we knew the chances would not be good, but Dave had suggested that legering might produce the goods with the odd swim still available for float fishing in the slack water.   As expected it was hard going, I got a grayling from  a comparative slack water on the far side of the rive while John managed a roach of about  1lb from the bottom weir pool.  A few brown trout fell to both of us but they do tend to be a bit stupid so no surprise there.  We had left the best chance to last and although I got a couple of small roach, it was John who took first prize with a 2lb-4oz specimen roach that makes these trips so worthwhile.  A short walk away was slack water that allowed the fish to rest and photos to be taken before returning them to fight another day. 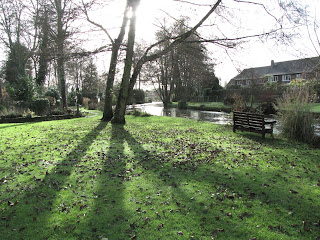 The River Test runs through the garden. 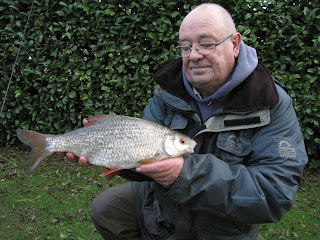 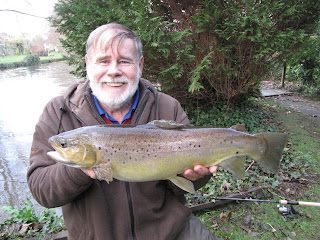 The Saturday proved to be a total washout, rain from the start to the finish, and my thought of a return trip to tempt a bigger perch from the section of canal failed miserably with total blank.  That’s what fishing is about in my eyes, the chance of a monster fish, but it needs work and effort to succeed and those good days have to be treasured to make up for the blanks.
Posted by Travelling Man at Sunday, November 25, 2012