Escape to the country and fishing.

British weather is perhaps unique in the variation that can occur in such a small spread of time.  Just hours can separate the sunshine from snow or thunderstorms.   The forecasts seem wrong most of the time but who would want their job in this country, I’ll have it in Egypt, ‘tomorrow will be sunny’ – I would be wrong once or twice a year but that’s ok.  As mentioned in previous blogs I would take no note of weather some 20 years ago, now I hesitate when it looks like the mix we have at the moment but eventually I have to go.


It appeared there would be a slight window of better weather on the Monday and Tuesday of this week so I made plans to get out then, zander and perch would be the target species.  According to the EA and many of our fellow anglers the zander is an alien species to be exterminated at the earliest convenience and without mercy.  I think otherwise.  Along with other predator species the zander has now found its appropriate level in the food chain, it is possible that in the early days of its introduction to a new venue it does run wild, but nature soon finds a balance and food supply controls all living things including ourselves.  My choice of venue was varied in that I could fish a lake that has produced a double in the past for me, a river that I’ve yet to get my double from, but it would be high in flood, or one of the local canals difficult to get the double figure specimen, but local and most likely to produce a fish, that would do.


From Coventry I can easily reach one of many canals, Grand Union, Coventry, Oxford and Ashby canals all pass within a few miles and all hold zander.  I have already fished the first three with some success but the Ashby as always been on the back burner, today would be perfect for that first trip.  Out came the high scale map and a quick look soon identified an area to begin my search.  I’m looking for an access bridge away from main towns etc.  This is because they are less likely to have been targeted by our European cousins who with set lines can decimate a section quite easily.  The EA used to run regular culling sessions on the canal but I do not know if this practice still continues, it did seem a total waste of time in that it made very little difference with too much canal to cover.  It does seem to me that the best control of small zander is a big one, they have to eat and the same applies as with pike – take out the big fish and you end up with lots of small ones. 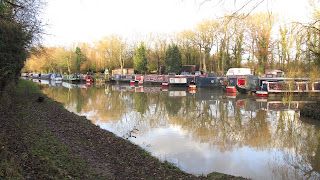 Surely there are zander here.
I had passed a couple of my selected bridges where there seemed no access to the canal but then found one with good parking and a nice track down to the towpath.  At first sight the venue looked promising, plenty of bushes growing out into the waterway and when I checked the other side of the bridge there was even a small marina that could give the fish that little bit of sanctuary should a cull come past the section.  I had the rods set up and this would be a simple float over a trace with a single size 1 hook and either a section of roach, lamprey or sea bait to try and tempt the fish into a take. 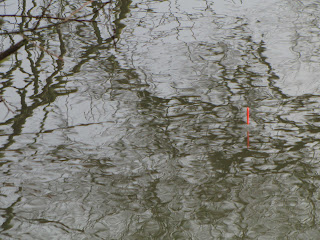 My float amoungst the branches.
Even in the depths of winter I was not the only idiot out for the day, a canoe went past just minutes after my arrival and was full of apologies when he went back after his return some twenty minutes later.  Three barges were also on the move where I had for some unknown reason not expected any, no problem there since often the zander take just after a boat has passed but not this time.  As darkness fell I put the tackle away and walked the 50 yards back to the van, at least I had got out of the house even if only for a few hours. 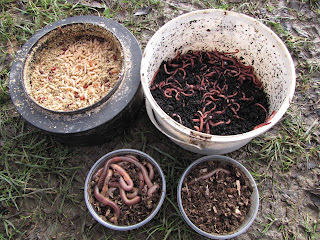 Dinner for a perch.
The next day was a trip to one of the commercials in the hope of tempting a big perch, this time Merv would come along as well.  It was slightly colder but with the sun shining it seemed quite pleasant and I could sit there looking at my float dancing with the attention of the small fish trying to take the full size lobworm without any success.  For the last hour I dropped the bait size down to the smaller worms but nothing took those either.   Merv did manage a perch of about 1lb-8oz on a smaller hook with two red maggots, perhaps I should have tried that as well but I felt the perch I was after could easily take my offering I’ll never know now if I was wrong!
Posted by Travelling Man at Wednesday, December 05, 2012