Three days in the South Part 2.

Friday came as it always does, but as I looked out the window of the bedroom I could see a two or three inch layer of snow freshly settled over the surrounding countryside.  It looked pretty as a picture, but I shivered just with the thought of the cold waiting to meet me outside.  The biggest problem with this type of situation is that you cannot catch fish while sitting in the warm of your room so gritting my teeth I set out on the 10 miles or so to get back up to the Avon Valley and then made my way to the chosen venue for the day.  Yesterday I had a deer stop for a considerable time in the trees opposite my swim, he seem to take little notice of me, but scared off when a dog walker passed some distance away.  Today I could see the foot prints of deer and many other forms of country life left in the snow, unfortunately these included otter prints as well, but they have got everywhere now so that came as no surprise.


The day’s forecast had suggested that the temperature could climb to the dizzy heights of perhaps 3C, but this was some hours into the future and getting the rod set up soon had my fingers frozen as though Findus Foods had been at work in their fish fingers department.   As mentioned in part 1 of this story I was using the same set up as yesterday, but now on the Avon the swim was slightly different.  Although the river level is extremely low it still had a considerable rate of current as it went past my swim, hence an extra sledge weigh was added to the feeder in order to hold station on the far edge of the bushes.  Even then, it still only just held and the slightest pull on the hook bait could dislodge the feeder and encourage the chub to continue downstream with the tiny size 18 hook now pricked into its mouth.  This does give a very characteristic bite where the quivertip just gives a continuous quiver rather than a pull round.
With the very low river level I considered the swim I normally fish when here to be too low for the chub to frequent and hence I moved to a new swim.  At times the chub can be very selective in where they settle down and it remained to be seen if my choice would be the same as they would make.  Again I waited for that first knock to let me know there are fish present and sure enough that tap came after only 30 minutes and it was immediately followed by the tip quivering as previous described.  I stuck and following a short scrap I landed a chub of about 3lb-8oz, not big but with it perhaps being the only one for the day I was very happy to get the snowy picture of its capture. 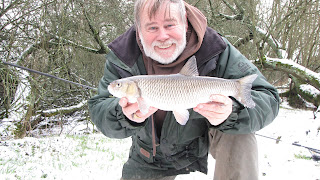 Although the river was at a low level there was still plenty of weed coming down on the flow and this seemed to always be on the same section of river that allowed it to catch my line as it entered the water.  While this is a problem it also makes sure I keep up the recasting rate and thereby top up the swim with fresh maggot, it is noticeable that I am not being troubled by minnows and that gives hope that there are more chub in the area.  Those people that do not fish cannot understand why we do it, out in freezing conditions to catch a fish that we immediately return.  That said, how you can explain the excitement of waiting for the bite off a fish that might be a new personal best, but will be welcome whatever its size.  I was just beginning to think that the chub might have been on its own when the tip signalled interest yet again, no preliminaries but a positive indication that resulted in a hooked fish yet again.  This time it fought a lot more strongly and I landed a fish I thought would approach the magic 6lb mark, but yet again the scales showed a figure well below that at 5lb-6oz.  I’m not sure why they should appear so low in weight, the cold might affect their feeding pattern to start with but they should be feeding now. 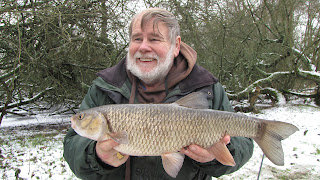 Following that capture it was quite a time before I got another bite, but this time I struck into a fish that did not want to leave the trees.  With the rod bent at ninety degrees I held him and thought I was going to win, but that proved to be too early a thought.  Several times he lunged, and several times I got him back, but the last time he broke that fine hook link.  It is never good to lose a fish but especially when it might just be a real specimen, now I had to decide whether to change to a braid hook length.   This is always a problem, accept the braid may well result in less bites but it will not give way under the pressure, or stay on the lower strength mono and take the chance.  I decided on safety first and changed over to my usual back-up for this situation, 4 inches of 4lb Fireline tied to the same size 18 Superspade hook.
It did not take too long before I was pleased with that decision and I was playing a fish that again did not want to leave the tree canopy.  He might not want to but I had better control now and the pressure told bringing him in to the mid river.  It is very exciting paying a big fish until you can get sight of it, then once seen holding your nerve not to relax how you play him.  All too often you can try and play them a little bit more carefully only to lose them because of this action.  No need to worry, I eventually slipped him into the waiting net and once weighed I could see I had got my target fish for the trip at 6lb plus, 6lb-4oz to be precise. 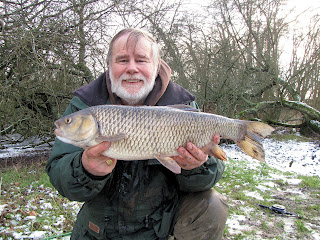 Best of the day at 6lb-4oz and target met.

There was just one more bite before dusk and that resulted in an immaculate specimen of 5lb-11oz to complete a very enjoyable day and although my hands were totally dead with the cold that was again coming back with a vengeance, once I had packed up I made my way back to the car a very happy angler looking forward to the next trip to the South. 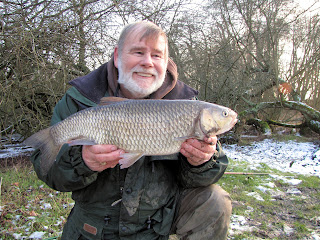