After four or more years of faithful use I finally decided to change my p.c. tower to a new and improved model, the trials and tribulations of that event are detailed in an earlier blog, but there was still one outstanding issue to be dealt with.

My previous system worked on XP and as with most new pc's this one has Windows 7 already loaded and looking quite nice.  Amongst other problems this gave me was in that the scanner I had used for years now became obsolete.  It appears that the Epsom Perfection 640U works on a 32 bit system, whatever that means; Windows 7 uses 64 bit and that means trouble.  I looked for new drivers, but eventually found out that it could not be increased and hence is of no use, a perfectly good scanner that has to be replaced.

Having looked at several new scanners I finally decided on a HP Scanjet G4010 and I have to say that other than a few teething problems I am very pleased with its performance.  For one thing it does appear to complete that task a fair bit quicker and it is also quite user friendly.

Of course I needed to try it out and my first scan was that of the first double figure barbel I ever caught, 12lb-4oz taken in Aug 1996 from Adam's Mill.  Since my first digital camera was brought in 2004 I have plenty of these film based photos to change to digital before I run out of tasks for the unit to complete. 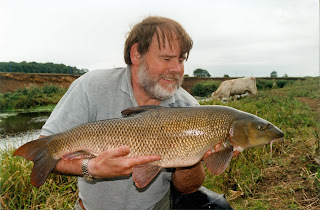