Three days in the South. Part 1

A day on the River Test is always one to look forward to, but with the day’s forecast to be at, or near zero temperature, it was not really my first choice for trotting with a float.  Taking a nice leisurely approach, the start for the day’s fishing was finally made about 10:30 am when the very sharp cold had just moderated slightly to one of being just cold rather than bl**dy cold.  The trouble with trotting is that I cannot do it while wearing gloves so within a very short space of time my fingers were frozen but this was offset by catching fish at very regular intervals.  As could be expected the conditions had made most of the coarse fish reluctant to feed but trout and grayling seem to disregard the cold and were well up to taking the maggots that were drifted past them.  The set up in use was a simple wire stem Avon float of 5AA capacity with the bulk of the shot set 18 inches from the size 18 hook and a single No 1 shot placed just a couple of inches from the hook to act as a tell-tale.  With 4.5lb main line and 2.6lb hook link the scrap off the bigger trout was exciting, then as always grayling of 1lb and 1.5lb gave lots of sport as well.  I had just one medium size chub and a small 8oz roach but just being there with the chance of 2lb roach always makes it interesting. 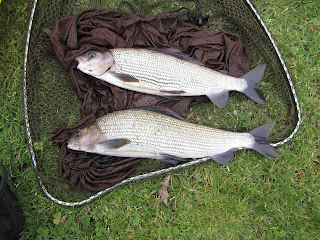 
With dozens of fish caught on the day I could make my way down to Bournemouth and contemplate both the success of the sport and the failure to catch those target roach, but that is fishing.   My pans for the next two days were to fish the Dorset Stour on the Thursday and then move up to the Hampshire Avon on the Friday; it was on the way home anyway so it made sense to do it in that order.  Still cold, and there was a slight frost overnight but not too bad so an earlier start was made getting to the venue about 8:30am, and without any surprise finding no one else there.  This can be a double edge sword in that with all the swims available it can be more difficult to make up your mind where to fish.  I’ve not been on this section of river for over a year so I do not know how the swims have fared and in the end I went in the one that gave me my first ever 6lb chub all those many years previously. 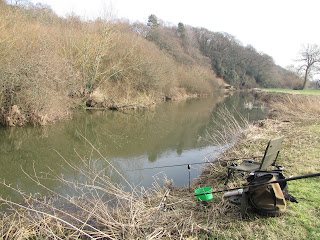 
I would be using the swim feeder maggot approach over both days – too cold to carry on trotting – for me at least – 6lb main line passing through a 50gram Blackcap feeder as previously described within this blog, ending with a 4inch 3.2lb hook link to a size 18 Drennan Superspade hook.  With a Drennan 12ft medium quiver rod carrying a 2.5oz glass quiver I was set for bear and ready to go.  My swim was a smooth glide passing bushes on the other bank which I hoped would give shelter to the odd chub.  They can be quite active even in these cold conditions and since the cold has been around for a couple of weeks they should feed normally – but would they, am I in the right swim? The questions remain to be answered over the coming hours.  I feel the use of hemp is essential on most occasions, but being so cold I will cut its use to a minimum and hence just one dropper of the hemp went into the swim along with three droppers of maggots, that will do for a start and I’ll top the hemp up perhaps every couple of hours.  By regular casting the maggots are automatically kept topped up, and with the feeders being used quite regularly in this area I’m sure the constant sound of it going into the water is like a dinner gong to the fish. 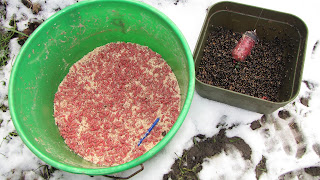 As always with this fishing style you are just waiting for that first knock on the tip to show you have fish in the area.  Today the knock came after perhaps an hour but things did not develop as I expected from that point.  I continued to get the occasional indication of fish, but even though two of these were enough for me to strike there was no fish caught, most annoying.  After some hours of this and perhaps six or more positive indications I was beginning to think that perhaps roach or even gudgeon were responsible, but then about 4:00pm I finally hit into a chub and following a very good fight on the light gear I landed a 5lb-12oz chub.  Big enough in its own right, but I had been convinced it would be a medium six when I first looked at it laying in the net so I could not avoid being slightly disappointed at the lower figure.  A better look at its body showed it was definitely light in the thickness and no doubt given another month it will gain those missing ounces when next I might meet it. 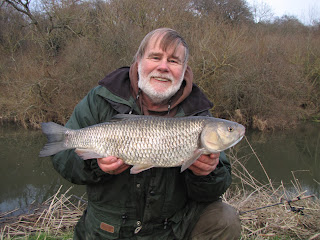 That was the last bite of the day and I left the river about 5:45pm well satisfied to have least have caught on a day that was far from perfect conditions.  The forecast did not look good for tomorrow, snow overnight and -6C temperatures, would the Avon fish? Only time would tell.
Posted by Travelling Man at Saturday, February 11, 2012