Catching a fish in today's rivers?

Jeff Hatt, in his blog Idler’s Quest – this can be found on my side bar - writes of a recent trip after chub and raises a few interesting questions.  Within the various comments made in response can be seen a number of interesting thoughts and I feel it was a theme that could be developed to a greater degree than just my own comment on that blog.


It seems that as a general body, anglers always hope for the best and will give numerous reasons why we failed to catch on the day.  Travelling around to numerous venues up and down the country I consistently hear the same type of comments being passed as to the lack of fish on the rivers, less fish - but of course there is no real problem!  Looking to support our moral we know the fish we seek  are there somewhere, maybe upstream or downstream avoiding the one or two anglers that might fish this stretch and put ‘pressure ’on them.  Could be that there is a big shoal of fish under a nearby bush, or hiding elsewhere just waiting for angler to find them.  Yes, there are many excuses offered for our lack of success, but the most obvious is that they are no longer there.


It is an absolute truth that fisheries up and down the country are being decimated by a number of different factors.  High amongst these are the illegal fishing by Eastern Europeans and of course otters with cormorants coming close behind.  It is no coincidence that on many venues you have more chance of catching a specimen fish than landing one of the smaller samples of the species.  I read in this week in the angling press of the vast numbers of assorted fish that are being restocked into the rivers by the EA, but can they keep up with the predation – I doubt it, and the cause should be tackled before the effect.


10 years ago I could have gone out for a short afternoon/evening session and almost guaranteed the capture of a chub - even in today's conditions.  Both the local River Leam and the River Avon offered chances of 4lb fish with an occasional 5lb specimen.  Now I am not even sure of catching a chub even in good conditions.


Today’s rivers are not pressured – there are just not enough anglers fishing on them to give anything approaching pressure.  Match fishing on rivers has almost gone the way of the Dodo - the main reason being they don't catch fish consistently.  30 anglers fishing and 2 or 3 catching is not what they want, but often the smaller fish shoal up as protection against cormorants - safety in numbers so to speak – and of course the angler sitting on one of these shoals catches.


Now when I go onto a river section I am probably the only angler there, if there are several others with me it is usually because of known big fish that live in the section and that in turn comes down to big fish or bust – there are few if any backup fish coming through.  Almost by default those big specimens are old – what happens when they go as they surely will over the coming seasons? 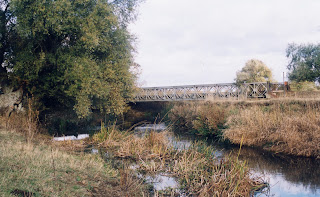 A view of Adam's Mill when monster barbel were common, now probably none left at all!
Posted by Travelling Man at Saturday, February 04, 2012