I think I just went through the summer and nearly missed it.  I travelled up to Stockport to fish the River Goyt on Saturday and from then until late Sunday when I returned there was NO rain and the sun shone for much of the time.  Of course as I got back towards Birmingham it started to rain again just to remind me what it looked like.


The river level was well down on that experienced recently and it was falling all the time I was there, but the fish were at least willing to have an occasional go.  My first choice of swim looked brilliant though soon after starting I realised it would probably be too shallow to give a chance in daylight.  When I began it could have been perhaps two foot but with that dropping level it would have been around one foot by the time I left.  I did not spend too long in this swim before I moved for one that would be slightly deeper, perhaps three foot or so.  The section of river I was fishing is generally quite shallow in normal summer conditions and more than four foot would be classed as a deep hole so fast shallow runs are the order of the day.  Another problem I found on the river was that of a snag ridded bottom, the river’s, not mine!  To my eye it seems that the land surrounding the river is made up of rock and sand, within the river’s course the sand has been washed away and in many areas and you are left with the rocks and pebbles that remained behind.  It was quite noticeable from my trips at the back end of last season how sandbanks and pebble strewn sections had moved in the floods, gone from one area only to appear elsewhere.  The problem was that within these rocky sections your lead or feeder would be trapped more often than not when you came to recast, a real tackle graveyard. 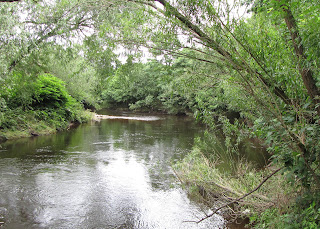 A pebble strewn shallow area can been seen on the far bend
I’ve not mentioned my tackle for some time so for the new reader of the blog here is a brief description.  As a general guide I use a pair of 1.75 12ft Drennan Power Barbel rods only going to the 2lb test model for big rivers like the Trent or Severn in flood when I might wish to use several ounces of lead to hold in the flow.  The reels are a pair of Shimano 5000’s loaded with 12lb line; I never go below this strength when barbel fishing since there seems no reason to do so and every reason not to.  I use a dual form of hook link made up of about 12 inches of 15lb Pro Gold mono to act as a stiff link and using loop to loop method [each of these tied with a figure of eight] I attach about 4 inches of 15lb Stren Powerbraid.   For the hook I use the size 8 Drennan Continental Carp and this is tied using a knotless knot to leave about a 25mm hair to take the bait.  If chub are being a real pain I would increase this hair length by 5mm or more in order to reduce the number of times the chub get hooked.  I always use the bait runner system on the reels since I would always wait for a positive take with line being stripped of the reel at pace.  The only posible change to this would be fishing next to a snag, but even then I would still prefer to sit away from the problem, then I would attempt to bring the fish out of the snag to my baited area. 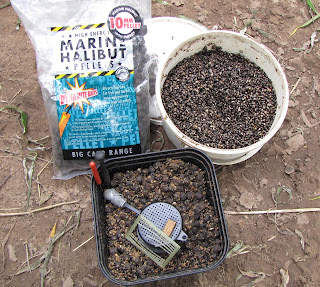 Enough of tackle, let’s get fishing.  Many times you will have read that the first order of the day is to lay the table, so after setting up the rod I bait drop perhaps 12 or more droppers of hemp and a few more drops with either broken boilies or pellets.   This trip I intended to use both so I loaded the dropper with both in order to give the fish a choice.  I have seen it said that you do not mix the baits in the swim, only using what is on the hook; I’ve not found this to be the case and will often use several different hook baits over the course of a single session and catch on two or three different offerings.  Try to keep an open mind since the playing field is forever altering.


Once this was done I could sit back and relax in the unusual sunshine beating down from above.  The water was still quite heavily coloured, looking more like weak tea than clear water so I was still confident that the barbel could be caught throughout the daylight hours, but I waited in vain.  As the light disappeared I finally got my first Goyt barbel and at 8lb-3oz it was worth waiting for.  It fell to a 10mm meaty type boilie and that accounted for two of the three barbel I caught on this trip, one of about 4lb followed this one and then another of 7lb-10oz during the following afternoon.  I also lost a fish that ran upstream and snagged on a rock just waiting for my tackle to arrive at that point.  That was it then, three barbel in 36 hours, not too bad but I’ll need to return in order to try for that double that will eventually fall to my rods. 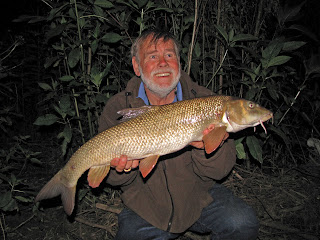 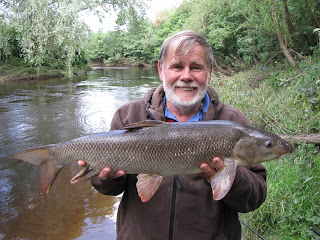