Just in case you did not notice it has rained most of the time since my last blog on Sunday.  Barbel wise this is not all bad news since they will feed in any conditions a flood can bring; hence we can then catch them as long as a fishing spot can be found.  Tuesday saw me back on the banks of the River Soar in Leicestershire trying for the new river double that is one of my targets for this season.
The river had fallen back from the very high levels of last Saturday and although still high it was very fishable with a little care on those very slippy banks.  I settled into a swim that was fairly confined by bushes on both sides, but still gave every chance of a fish, the only problem was the fish I caught were bream and small ones at that.  A couple of lads had been fishing just along from this spot and when they left I dropped into that swim since it gave a far clearer view of the river and more room to play a big fish should I hook one.  The local bailiff came along and while he stood talking to me I got a take that stripped line off the reel at a great rate of knots before dropping the hook.  I did make a comment about it probably being foul hooked and when I eventually got my rig back there was a quite large carp scale impaled on the point proving my guess to be right.  The bailiff dropped into the swim I had vacated and although I had a barbel blank he caught a fish of exactly 10lb but then you can’t win them all! 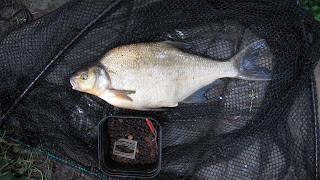 A small bream off the R. Soar.


On Wednesday I returned to the River Severn and although it had fallen by three or four feet it was still high and I suffered yet another blank.  All too often the writers of articles and books do not relate the number of blanks that are suffered in the pursuit of big fish.  It is easy for the comparative novice to believe that these anglers catch fish almost every time they go to a fishery, not true – they blank just the same as I do and you will have the same fate as well. 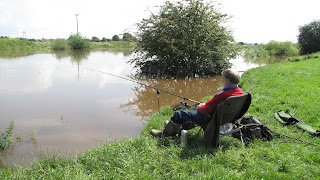 Severn in flood, water should be 16ft lower and in front of the tree.


For the Thursday the weather forecast was the best of the week and I decided to try and make full use of the warmer conditions.   I left home that morning with the intent of going to the estate lake after the tench and I also took my river gear just in case the fishing was not going well so I could transfer across to the River Soar for the barbel.   On the lake the weed was beginning to show and when the angler next to me hooked a smallish bream of just over 4lb he had to pull it through some quite extensive weed beds before he could land it.  Fortunately the weed was of a very soft nature and broke quite easily with gentle pressure so no harm done to the fish, just no sport in playing it to the bank.  I was using maggot feeders whilst the other chap was on method feeders with corn as his bait.   He caught three bream but I never had a touch by the time I decided to move at 5pm, not too disappointed since I was after the tench.


The ten mile run was interesting in that I had forgot to allow for works traffic coming out at that time so it took a fair but longer than expected, I’ll remember that next time hopefully.  Still by 6:30pm I was in place and setting up tackle for the evenings fishing.  The river had dropped back another two or three foot and it was now not far off normal level although it still carried lots of colour.  I bait dropped about two pints of hemp along with a small number of 10mm Dynamite Monster Crab boilies and then set up the tackle to fish straight leads on a running rig system.  I had been using the feeders with mixed pellets but decided a change is a good as a rest and hence the different method.  Regular readers of this blog will by now have realised that I do not favour just one method, there are many ideas to try and on their day they all can work, don’t get blinkered in your approach, you will probably lose out if you do.


The few hours before dark passed by with just a rude interruption by a small 4lb or so carp that scrambled all over the swim on a tight line before coming to the net.  The bailiff turned up just before I landed this carp and gave me a mild warning about the lack of a suitable unhooking mat – quite right since I had left it by mistake in the van as I changed from tench to barbel and the only mat I had was a poor excuse that I sit on when fishing.  As he left to continue walking his dog he commented that I had another 30 minutes or so before it was dark enough for the barbel, not strictly true, but sure enough at about 10:00pm I got my first barbel take while on this section of the river.  I landed it and thought I had my double, but before I could do more than just unhook it my other rod went and quickly replacing the fish in the edge I played the second barbel to the net to join the first.  It was by now raining quite steadily and I set the camera up under the umbrella and soon had this second intruder weighed and photographed then returned.  It went 6lb-7oz and that first fish had dwarfed it in the net so with baited breath I set about getting that fish weighed as well.  Digital scales are brilliant, but when they settled down on the numbers 9lb-15oz without a waver I did give a little curse as to their accuracy.  Still it was a river pb and a very pleasing fish even though it missed my target weight by that single ounce leaving the target still to be achieved. 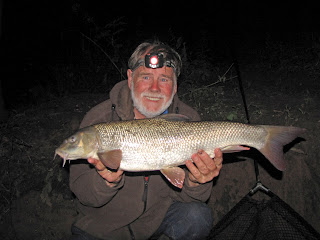 The 6lb-7oz part of the brace. 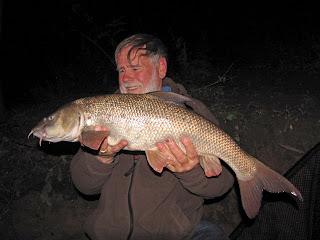 A 9lb-15oz near miss for the double.
I had thought to fish until the 11:00pm struck on the church clock, but with that success I decided to extend that by a further 30 minutes or so.  That stills means that it will be gone 1.00am before I got home and that’s late enough for me.  The rain was quite steady and extra-large drips were falling on the umbrella as they came off the overhead braches.  Those people who wonder why we fish could have learned a great deal just sitting there in the dark with all the sounds of the countryside around my position.  Then with perhaps ten minutes left to the self-imposed deadline this calm was interrupted by the alarm indicating a bite.  Barbel are brilliant fighting machines and this one played that part well but eventually he came to the net and was engulfed in its folds, safely mine and it was again a big fish.  No interruption this time as I got all the gear out after I had stowed it all away ready for departure while he recovered in the landing net.  Scales ready and camera again set up under the umbrella I finally got down to weighing him.  At 11lb-1oz he met the target with plenty of room to spare.   A dodgy tail but that is the price so many of our specimens pay for the attentions of the predatory otters that occasionally fail to make good their hold on the rear end of the fish. 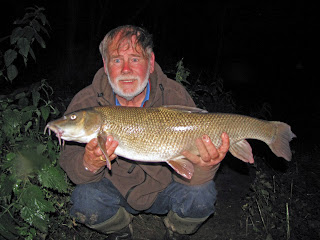 
I packed up well elated at that success bringing my different river doubles up to a total of 22 and it seemed fitting that as I walked back to the van the rain stopped almost as though in celebration of the capture, though that is just wishful thinking on my part.  As with all my targets I now move on to the next river, and the Ribble or Goyt double will hopefully be joining this fish on the list at some time over the next few months, I’ll let you know of course!
Posted by Travelling Man at Friday, July 13, 2012