Regular readers of this blog will have noticed that there can be long spells of fishing between the capture of specimen size fish as you would expect.  My January results had been quite disappointing until that pb barbel of 15lb-4oz off the Anker last Saturday and I wondered just how long it would be until the next good fish graced my landing net – now I know – two days!
I needed to go down to Oxford to help a friend on a problem he had, and it had been arranged that I would go on the Monday 23rd January.  With this arrangement being made some weeks ago I was in the hands of the gods as to what weather conditions would be like, but the forecast had showed it to be dry and warm for this time of the year so fishing arrangements were also made.
I knew the problem would only take an hour to sort out and with some reasonable pike fishing to be found in the area I suggested to Mervyn Wilkinson he might like to come along, he agreed and it was arranged we would leave at 6:30am to arrive just after dawn.  The venue was a medium sized gravel pit with plenty of features to attract the angler fishing there.  Previous experience of the piking suggested that they well might be a few fish in one of the bays that lay off the main lake, so we would start there.  The roach were there as well, and in quick time half a dozen 4 inch samples were in the bucket ready to go on as bait.  I had decided to use sea baits as quite often these will select the larger pike although normally they will not catch as many as the live-baits.   Meanwhile Merv would fish one rod on each, live-bait and sea bait.  My tackle was as you would expect for piking with 15lb main line, a wire trace and two size 8 trebles fished Jardine style.  Merv has been trying to avoid the use trebles and he had similar gear, but just a large single hook on the wire trace and he used it to good effect.  Starting right at the back of the bay he was soon playing his first pike and that proved to be a fish of perhaps 6lb and fell to a roach bait.  Within twenty minutes or so another followed that one but this time to his head of mackerel, each fish fairly hooked right in the scissors of the jaw line.  At this stage I left to meet up and sort out the problem that was the reason for the trip returning about an hour later and just missing Merv’s third pike, a long, lean, fish estimated at 15lb.
Shortly after returning I decided on a move and went perhaps 30 yards further along the bank towards the main body of the lake.  As I put my tackle down a pike swirled in front of me, then within minutes another showed just a bit further along the bank.  I quickly went back for the rest of my gear and suggested to Merv that he moved into the next swim along since it appeared the pike might be packed up in the area.  As it turned out even before he passed me in his move I was playing a pike that had taken my sardine bait almost immediately follow my cast in.  He dropped his gear in place and returned to help with the net and by this time I knew it was a reasonable fish.  Netted at the first chance following a good scrap, Merv looked in the net and said, ’about 18lb’ then lifted it out onto the waiting mat.  Now looking at it laying there he quickly revised the estimate to 20lb+ and so it proved to be at 20lb-6oz.  That was the first twenty I’ve had for some years although I’ve not fished for them to any degree, obviously delighted with such a fish caught almost by chance since I would not be here without the other need arising. 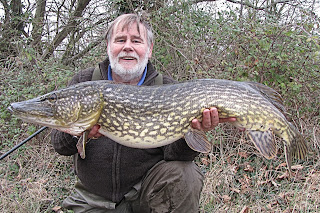 The rest of the day passed much the same with Merv’s total ending on 10 pike with four doubles. I had just the two, but with that big fish in the net I think we were both happy with the result.
Posted by Travelling Man at Tuesday, January 24, 2012

Email ThisBlogThis!Share to TwitterShare to FacebookShare to Pinterest
Labels: Pike.