A northern gold medal barbel off the Swale.


Sometimes the reward for effort comes from an unexpected direction; this capture was such a time. As mentioned in the previous blog I travelled up to Wetherby to give a talk to the local Barbel Society members and that seemed to go down quite well. I had generated a new presentation and this was the trial run, so it was very pleasing to get several of the audience approach me when it finished saying they both learned a little and enjoyed the talk as well.

A big advantage of the bed fitted in the van is that I can stay anywhere without a problem, just a short piece of level ground that is out of the way - job done. I had been given the chance to go onto the River Swale, not a new river to me as I had fished it on a one day trip onto the then Barbel Society section at Topcliffe, on that occasion both I and my companion for the trip blanked.  This was a fair number of years ago and I welcomed the chance to try again if only to catch a barbel of any size.

The following morning I met up with the angler who had made the offer, Sean Meeghan, and then we made our way to a local tackle shop where we got the appropriate day ticket for the stretch we were to fish. The tackle dealer did not give much encouragement as he described very poor recent results off the river, but hope springs eternal. Following a trip that ended by going along a number of small, narrow country lanes we arrived and I got the first look at the intended section we would fish. It looked terrific with trees lying alongside the bank to give good looking snag swims but not too many to spoil the effect. Sean mentioned that the heavy rain of the previous afternoon and night might colour the water and sure enough as the day progressed I could see the peat effect showing in the flow. 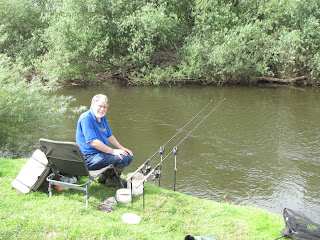 I had taken both pellets, and maggot/caster with hemp to cover the chance of extra water or low water conditions. As it was I felt happy that the maggots should work and I bait dropped several droppers of hemp along with a mix of casters and maggots across the river to my chosen tree snag. This rod would be my main attack and get most of the attention, but I also used the second rod to put a bait out well downstream with pellet on the hook, and a mix of pellets held within an open-ended feeder as described in previous blogs.

My first cast produced a perch of about 1lb but that was it for all my efforts. Both Sean and I had decided that the best approach was to bait up several swims and then try each in turn in the hope to find a swim with resident barbel. By early evening I began to fear the tackle dealer had been right and I would be returning home following a blank on this river yet again. Then about 5:30pm after several different swims I finally got a bite off a barbel. This time my rods were slightly different in that I had the maggot feeder on the inside line and the pellet bait presented more in the middle of the river. This was because the opposite bank was definitely dangerous being one long snag just waiting to give the barbel sanctuary.

When I hit the fish I thought it was a hard fighting good sample and just held on as it tried very hard to go into the tree opposite. I could see the water surface boiling just off the branches that reached into the water and feared that any moment I would get that sickening feeling as the fish got around a branch, fortunately he failed. Once away from the tree he made less effort and was content to swim up and down in front of me just resisting the pressure to come towards the net. Then at last he slipped in and I could call Sean as I had already seen that he was a very good fish. As he arrived the scales and camera were made ready, the usual guessing game was more a case of dropping the weight down as I convinced myself that he could not be as big as I had initially thought, but he was. At 12lb-2oz he was also one of the best the Sean had witnessed off the river and obviously well above anything I had expected. This now means I've taken double figure barbel off 23 different rivers, and since it was not one of my target rivers I still have the Ribble and Goyt to try this season. 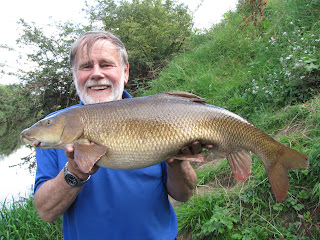 I had been listening to the Olympics on the radio to sports men and women getting gold medals but I'll this gold medal specimen anytime as my reward. When I slipped him back into his watery home I said goodbye since with a 150 mile trip to the river it is unlikely I will return. I would like to end this piece with a big thank you to Sean who made the capture possible by taking me to the right stretch on the day.