About a month ago I fancied a spot of catfish fishing and decided it would be good to have company so I invited a couple of fellow bloggers to come along.  Leo Heathcote  of the  ‘A Fisherman’s Journey’ blog, here and Rob Thompson of the ‘A Specialist Anglers Diary’ blog, here  both jumped at the chance and a suitable date was set in stone, 48hrs starting mid-day on the 19th August.


The venue to be fished was the Club Lake on the Orchid Lakes complex near Oxford.   Famous as the Home of the 30's, refering to the numerous big carp that are present in the main lake, but well known to catfish anglers for the great fish that it consistently produces with numerous specimens present over the 40lb mark along with even more below that weight to give the visiting angler a chance at a big tadpole.


It came as quite a surprise when Merv Wilkinson mentioned he would like to come along, he is 76yr old and to my knowledge he has not fished through a night for over 25yr, I’m not sure of the exact time he would have last done such a venture but the 25yr mark is definitely a minimum.  He had no suitable gear for staying on the bank, why would he? But I had sufficient and he was looking forward to the venture with enthusiasm not seen for quite a while.


For once a long term plan came together with good, and highly suitable weather conditions.  Normally I would not want bright sunny days with temperatures soaring into the higher numbers that are experienced in this country, but with cats it was no problem.  We set off loaded for bear, a good variety of baits and heavy carp rods capable of stopping the powerful cats that we both hoped would be waiting for us to arrive.  By late afternoon we were all four of us in place, Merv and I on the corner swim and Rob and Leo on the Green Bank.  The cats often get caught by the normal day ticket anglers after carp so obviously we got out various offerings out hoping one of the target fish would pass by and pick up our bait.  At least that was the plan but as darkness fell we were still waiting.


With the high overnight temperature I was still in shirt sleeves reading my Kindle story of dragons and goblins when just before 10:oopm I heard Merv’s comment ‘I’m in’ and I quickly made my way along to his position to help get his second rod out of the way before he brought his prize to the bank.  I had not needed to hurry as the fish powered away taking line again as soon as Merv took any up.  Merv swears that both Rob and I left our rods in his way just to hinder him landing the fish but either way he still got it coming to the net and it was safely landed.  I untangled the two other lines that it had picked up and then got into the weigh and photograph mode.  The scales indicated a terrify new personal best of 39lb-2oz beating his previous best taken in 1983 from Claydon Lakes, the catfish Mecca of that time. 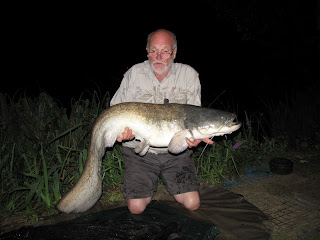 What a dream start to the session, the first few hours and Merv has this pb followed at about 3:00am by Leo landing an even bigger fish of 43lb-12oz but I’ll leave that story for him to tell.  Nothing more was to happen through that night and the following day but as darkness fell we were all on edge hoping that yet again the cats would make an appearance.  Sure enough at around the same time as the previous night Merv hooked into a cat yet again but this time his elation was short lived as the fish threw the hook, not unusual as they have very bony mouths.  This was of course disappointing but it did give hope that the cats were yet again ready to feed and at just after 11:00pm I finally got a chance myself.  The fight was good but I knew it was not off one of the big fish, I stopped it running off the clutch a couple of times and you don’t do that with the big ones.  Once landed it went on the scales and came in at 22lb-5oz one of the home grown samples since all of the original stocking are mostly 40lb plus or big 30’s now. 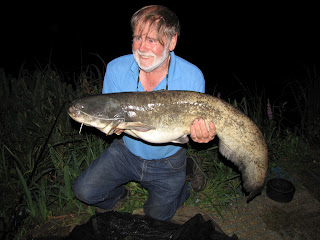 Almost a kitten on this venue.

Unfortunately that was the end of the action and we packed up mid-morning with the old thought upper most in our minds – we’ll be back!
Posted by Travelling Man at Tuesday, August 21, 2012