Interesting couple of days in that I went locally to try a bit of 'crucian' fishing.  Friday went quite well since I was catching lots of fish, bream, roach, but initially not the crucians, I had tried a large variety of pellets flavours and pastes until I dropped on the chocolate malt which seemed to be the crucian's favourite.  Not only that it also seemed to cut down the capture of the unwanted species as well and in the last 1.5hrs of my session I took 7 of the little gems to about 1lb-8oz. 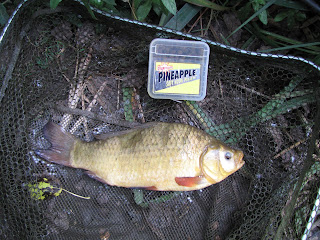 Bait tub for size reference - that one caught bream.


Returning Saturday I went in with the chocolate malt thinking I had this sussed - how wrong can you be?  Catching loads of bream and roach again but then that thunderstorm moved in.  Lightening and very heavy rain stopped play as I held onto the umbrella in the strong wind that had also appeared then the storm moved through and the sun came out again.  Everything seemed back to normal but the bites had dried up almost completely, I stayed on for another three hours but other than the odd fish, but no crucians, I had no sport.  Maybe the sound of the large raindrops hitting the water disturbs the fish; perhaps air pressure does it, whatever it spoiled the day's sport.  Still there is always another sunny day to go out and try again to fool our target fish hopefully without that rain coming to spoill it.
Posted by Travelling Man at Sunday, August 26, 2012