Amongst the many species of coarse fish that I devote my angling hours in pursuit of specimens, the crucians hold a special place.  They can be the most frustrating of fish when fishing for them with float tactics which is my preferred method.  One minute they give suicidal bites and the next you are hardly aware of the floats movement even when the shot is applied to take it down to the slightest dimple on the surface film of water.  I was going down south in order to fish on a Barbel Society fish in arranged by John Found on the Kennet, so I thought to take advantage of that trip to drop in on a crucian water and spend thirty hours or so in an attempt to get the prize of a 3lb plus specimen.  No sooner thought than decided I loaded the van with the multiple types of tackle needed and set off mid-day Thursday.


The early part of last week had been showery and overcast but the temperature had held quite reasonable, by the time I set out the temperature had gone into the high twenties and the sun shone out of a clear blue sky, not ideal conditions.   I arrived to find the lake well in use though most of the anglers were more interested in the king carp rather than the crucians so little problem there.  It was quite interesting to watch some of these lads casting 100 yards into the middle of the lake while carp swam on the surface 30 yards out in front of them, there must be a reason but I could not figure it out!


John had already arrived, but had not got set up when I walked up the bank and found I had left my landing net head in the van.  Having been back to collect it and returned to my swim I saw John had already completed his tackling up and was now playing a crucian.   The fish went 2lb-3oz and of course it gave both a big lift towards the expected catches, but that was to prove a futile dream as the afternoon hours passed without a single sign of a fish.  Several hours later we had a touch of sunburn, but no fish of any description to our name, so we went into darkness hoping that would make the difference.  It did to the degree that I took a crucian of 2lb-12oz but no other fish came our way.  As midnight approached John packed up with a great deal of disbelief in that earlier that week he had taken loads of tench, roach of a good size and four crucians, all in the same time as this visit.  It seemed the fish did not like the sunshine in a big way. 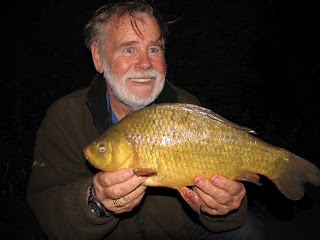 By 5am the following morning I was back in place having spent a few hours asleep in the van and then making two flasks of tea to get me through the day.  My tackle was the usual Drennan 14ft Matchpro Ultralight rod which can handle the bigger tench at the same time as allowing a good scrap of the 2lb crucians.  With a mainline of 4.5lb and a Kamazan B520 giving 2lb-12oz to a size 14 hook for taking the variety of bait I would be trying.  Various pastes and soft pellets along with prawn were tried and eventually fish were caught on most of them.   I had taken a bag of Dynamite Swim Stim Red Krill as a carrier for a few particles and although I did not use for the first afternoon I now set out my stall to include it in my attack.  Yet again the surface of the lake was quiet with none of the usual crucian showing them as they tail splash or roll over the ground baited area, I wondered if yet again I would struggle for a bite. 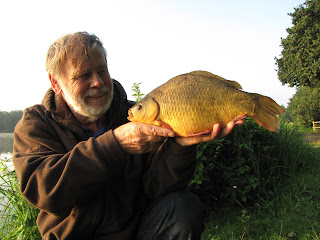 At 6:40 I got my answer as a strike hit into a nice fish that surged all over the place as it tried to evade the hook in its lip, fortune was on my side and I slipped the waiting net under a fine sample of crucian that showed on the scales at just under that magical 3lb figure.  That gave me heart and throughout the morning a slow but steady trickle of fish came my way.  More crucians were joined by roach to around the 1lb-8oz mark and tench to 5lb to give an enjoyable session.  Listening to the Olympics on the radio and the gold medals that were coming Britain’s way with some frequency, I could not avoid the thought that each of the fish was so similar in a golden way.  I failed to improve that first fish of the day and hence did not get my hoped for 3lb specimen, but the next best thing was to be invited to photo graph a 3lb-10oz giant for a lad fishing along the bank, it did show they were there to be caught.  At the midnight hour I left the lake to the many anglers that had arrived for their weekend session and got my head down for yet another early start to join up with the lads to fish the Kennet the next morning. 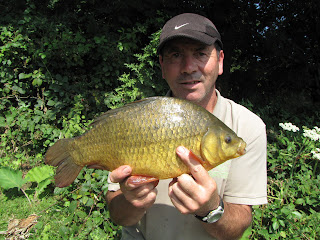 Recent reports from the river had not been good with most anglers struggling to catch, as always if there are enough bodies on the bank then someone will either get a very big fish or alternatively a number of fish, but on average it was hard going.  The anglers attending the fish-in ranged from very experienced to almost complete novices, but it made no difference as all methods and anglers failed to put a single barbel on the bank over the two days we were fishing.  Following the summer floods of 2007 we experienced a dramatic drop in barbel catches; I’m hearing all too much that this is happening yet again as many rivers are not producing the expected catches at the moment.  I hope this is a temporary thing and the fish will return onto the feed shortly, but at the same time I’ll be keeping my ear to the ground to see if things change. 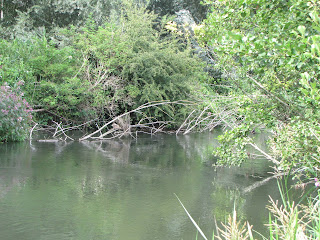 A known Kennet tree snag but no one home.
Posted by Travelling Man at Monday, August 13, 2012