With the forecast giving a big drop in temperatures, I decided on a trip north to try and progress my barbel river doubles target.  Currently it stands at 23 different rivers where I caught such a barbel, but why stop there?  I have already tried the River Goyt on a few occasions and have indeed caught some nice barbel from its depths, but not the double, perhaps this time it will reward my effort.
I had seen that Des Taylor would be giving a talk to the local branch of the Barbel Society so I decided I would go up to Stockport early on the Tuesday morning and fish though to about 7:00pm, then I could make my way the couple of miles to the meeting room ready for the8:00pm start.  I would stay in the van overnight ready for another try on the Wednesday and back home late that evening. 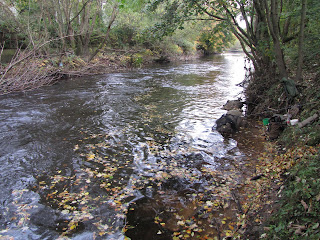 The leaves show the crease line quite nicely.


My first choice of swim showed the one thing I had forgotten to allow for, it is autumn and the leaves are falling causing major disruption to any line laying in the flow of the river.  In just a few minutes the line would be clogged to the limit and a recast would be needed, worse was that it often moved the swimfeeder a this invariable found one of the many rocky snags which litter the bed of this particle venue.
I moved to a swim that had a nearside crease and slack water to give a little sanctuary from the pesky problem and it seemed this would work as within moments of my first cast I landed a small barbel.  The leaves still came into the slack but without the push of the flow they were an acceptable problem.  I had bait dropped hemp and casters as is one of my favoured methods and it seemed to have worked, but I thought too soon that my ship had come in. 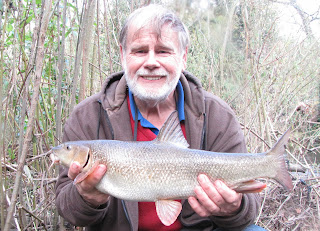 The first cast and first of many I hoped!

It was now mid-morning and I quickly took a small grayling to give a mixed bag so obviously fish were feeding, maybe that time had come.  It came and went just like that and the constant rebaiting and attention to detail gave me no favours with the 7:00pm deadline coming with no further action to report.

I arrived at the talks venue to find it well attended and Des’s talk went down very well as one would expect from such and angler.  Lots of chance to talk to local lads and friends made over previous trips, and we caught lots of barbel in the room – would the next day work its wonders, I retired for the night and that was my question as I fell asleep.
One big advantage of this period of the year is that dawn comes at a respectable time, around 7am I was making my way to the new choice of swim, again a slack but further down the river and hopefully there would be a resident big fish waiting for my bait to arrive.  I fished hard and even stayed until a bit later, but all to no avail as just one small chub took the bait and it seemed that no one on the river caught barbel – maybe next time when hopefully the leaves will all have fallen and been swept away. 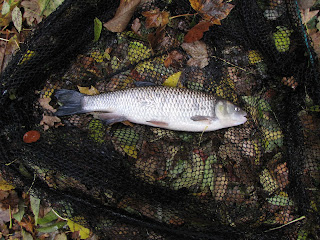