With nothing to do I decided on a last minute afternoon trip to the Warwick Avon for the barbel.  The EA river check showed it to be in great condition and a phone call to a couple of friends fishing the river at the time confirmed that to be correct.  I set out and around 3:0pm I was there and looking at perfect barbel water, they must be feeding in these conditions.


Quite quickly I was up and running with my two baits placed in the flow, one alongside a near bank bed of pipe stem rushes, and the other out in the main flow not quite the middle of the river.   Bait choice was one of my usual mixes for these conditions, Elips pellets on the near rod and Monster Crab boilie on the other all I needed now was a fish to show interest. 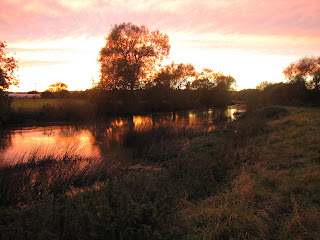 Dusk seems to come early now and by just gone 6:00pm it was well heading into dark with a glorious sunset sky.  Shortly after the darkness fell I got a rattle type bite that I knew was unlikely to be a barbel and so it proved.  A chub approaching 4lb had decided to try the pellets and got hooked up for its foolishness, quickly returned and I was waiting again. 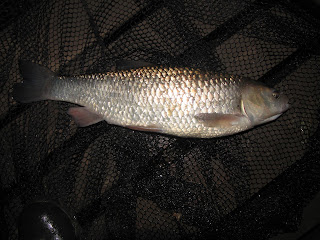 The first visitor of the evening.


Time seems to stand still when settled in for the night, but my watch showed that my chosen finishing time of 11:00pm was fast approaching and nothing more had happened.  At regular intervals I had recast both rods and refilled the pellet mix I was using in the feeders, soon after my last cast of the night the pellet rod indicated action again.  This time it screamed off and I was not surprised to hit into a barbel though he did appear to have gone into the reed bed and was well stuck.


I tried all the usual tricks, pulled very hard, went as far downstream as I could and tried a pull from there, slack line to see if he would move but none worked and I felt this was a lost fish.  Almost as a last gamble I went along the bank and got a position level with where he appeared to be holding, then with the rod held as far out as possible I tried to lift it directly upwards and almost to my surprise he came free.   A quick few steps back upstream and a very strong battle on a short line followed, no good letting him go back into the rushes and at last he weaken going quietly into the waiting net. 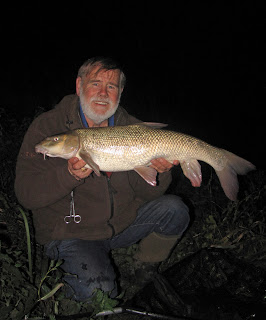 Always welcome.
The Fox scales flashed between exactly 10lb and the 10lb-1oz mark, but a double no matter what, great result and always welcome.
Posted by Travelling Man at Sunday, October 21, 2012