A near brace of double figure barbel.

With the rivers still calling, I though another day on the River Severn was in order.  I could go every day, but I learned a long time ago to work on the idea that it is the times you don’t go fishing, that makes the ones that you do so much better.  Anyway, I checked the EA river line and found that the Severn had dropped about another 6ft, no problem in one way but on the Severn a big problem in another.  In a lot of areas of the Lower Severn where you may be fishing on natural banks without the interference of anglers making steps and platforms, the height of the river can be important.  In high flood you can sit on the top and with a long landing net handle still reach fish perhaps 6ft or even 8ft below your position, once the level falls below that you need to go down the bank.  Any angler that fishes spate rivers or those like the Severn with high banks that get covered on a regular basis will know the problem, silt that gives a layer of mud over everything in sight.  On steep banks where footing can be dicey at the best of times this adds an extra danger since falling into a flood river is definitely not recommended.


All this means that I cannot return to my previous choice of venue mentioned in the last blog and instead I chose one where I knew of a few spots that would allow safe access the lower levels down the bank all be it still covered with think mud.  Once at the venue I chose a swim and then from the field behind my choice I managed to collect straw that the combine harvester had missed, then I used that to make the swim just a little bit safer.  It was now mid-afternoon and whilst talking to another angler that had just arrived I made my first cast with a boilie bait and the usual pellet loaded feeder.  The lad went off to get his swim ready and mentioned if I needed a photo just call, He was still cleaning the mud from his pitch when I was there to ask for a photo.  I had been loading pellets into the second feeder and looked up to see the rod just wrapping round in response to the usual violent barbel take, a definite 3ft twitch.  In line with my usual practice I had made the landing net safe to let the barbel recover after the fight before I removed the hook so when I returned with my cameraman we weighed the fish having both suggested a definite double.  Wrong again, and the scales came in at 9lb-15oz a weight that was to deny me the brace of doubles on the session. 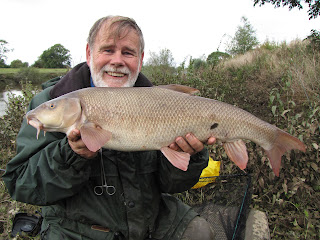 At 9lb-15oz the smaller of the brace.
With a nice fish already in the bag I continued and the next bite produced a different result.  This indication was almost an apology for a bite, just a gentle tug-tug that went on to produce a 7lb-10oz bream one of two that I had before I finished the day.  Normally I am inclined to dismiss the river bream as they will fall between the 1lb and 4lb range, but this one just looked big and only the lack of thickness in the body stopped it going into doubles figures that I so prize off the stillwaters. 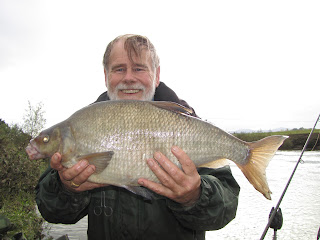 The afternoon was proceeding quite nicely and I was well pleased with my catch already landed, but then it got even better.  The rod went round and I struck into solid resistance, my first thought was a big fish, but there seemed no thump that you normally get and the pull was getting stronger by the moment.  I had almost convinced myself that I had hooked into a passing log or tree branch when I felt that tell-tale thump and now I got excited – this could be very big.  Following an interesting fight that was totally different to the first barbel in that this fish did not charge round, just solid power, I landed a very pleasing barbel that was to turn the scales to 11lb-10oz.  The photographer was equally impressed and although he had taken a couple of barbel as well they did not need my photography aid being a best of 8lb plus. 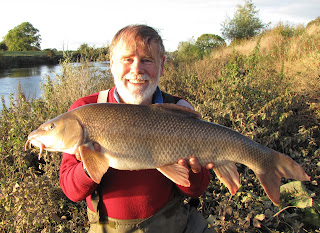 11lb-10oz of power!
It did seem a little strange that these fish had come in daytime and although we both fished until 8pm there was no barbel caught in twilight or darkness as is usually the case on this fishery, maybe next time.
Posted by Travelling Man at Tuesday, October 02, 2012