With all the recent rain we have experienced the rivers have been singing their songs again, and the sound I hear is ‘The barbel are feeding.’   Being one not to ignore such good advice I have been out trying on a couple of different rivers with varied success.


My first effort was a return trip to the local Tame for yet another attempt to catch a barbel off yet another river.  As always my hope is for a double figure specimen, but initially I would be quite happy to just catch a barbel of any size, I have not succeeded yet but I will.  This trip saw me arrive just after the river had returned inside its banks having been well over the top and back into the surrounding fields.  It does seem amazing how quickly the seagull descend onto these new feeding grounds and the sky was full of the screaming birds of all different varieties. 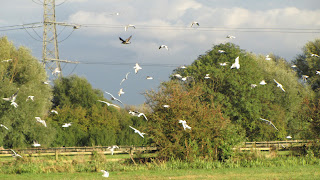 A small section of the birds in the field.
My previous two trips had been well dogged with drifting blanket weed and this was with a low river and little flow conditions, I did wonder what this trip would be like with that extra water rushing through.  After an hour I knew the answer and the floods had done a great job in removing most of the problem.  I now had less weed on the line than previously experienced and I could leave the bait in place for a good 20 or 30 minutes before recasting with a fresh load of mixed hemp and pellet in the feeder.  I know the tackle and tactics were capable of catch barbel, I  havehad enough of them, but this was not the day for success, and next time I’ll try a different swim again until I find them.


A day on the River Severn with Merv early in the week before the rain, saw the river very low and clear with just chub being caught despite our best efforts.  Now, with this rain the river had come up and over the banks so I waited until the EA river levels site gave the indication that the river would be back within the banks and fishable again and then made plans to go.  Being a Saturday I invited Curtis along and he jumped at the chance of improving his barbel best of 9lb-5oz off the River Teme. 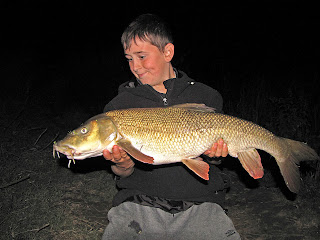 We arrived mid-morning to find the river in perfect condition for babel fishing, just inside its banks and lightly coloured as you would expect for a river in flood.   We would both use similar tackle and tactics, these being a swimfeeder loaded with 6oz of lead used on 1.75lb test Drennan rods and 12lb main line to the usual 15lb braided hook link.  The baits would be boilies, Dynamite Shrimp and Prawn for me, and one of the Pallatrax range for Curtis, we both would alternate with Elips pellets on a regular basis just to see if there was any preference being shown by the fish.  The feeders would be loaded with the usual mix that I’ve used for some time now and fould it quite acceptable.  I mix up different sizes of pellet and types of pellet, and then load in drained hemp particles at a rate of about 50/50 into the mix.  The hemp holds just enough dampness to cause the pellets to hold in the feeder without going completely in to a soggy paste, which is not what I want.


The morning passed by without result and it was well into the afternoon before Curtis got the first action of the day.  I had been surprised at having had no fish as the River Severn is definitely on its way back in terms of barbel being caught, but once this fish was landed Curtis did not worry about having no previous action, he now had a very big fish on the bank.  As it came to the net I had suggested maybe 12lb, but on the unhooking mat I adjusted my guess to 11lb.  Curtis was understandingly very pleased with his new barbel pb at 10lb015oz, but I need to get my eyes re-calibrated! 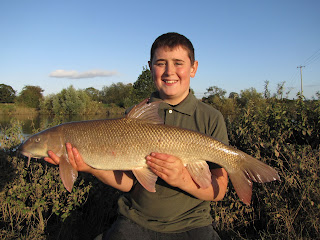 Following the action that Curtis was still celibrating I did get a couple of barbel myself, one of 5lb and another of 6lb, I suggested we were equal on weigh but he would not have that for some reason thinking his fish was better than mine? 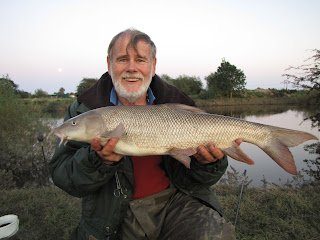 My Severn average barbel with the moon over my shoulder.