A day after monsters.

Last week it was Scottish roach, later this week it will be barbel, but yesterday it was Sturgeon.  As regular readers of this blog will know I do love fishing for these powerhouse species that have both the speed and power to set the pulse rate into overdrive.  Straightforward tackle, carp rods loaded with 18lb line, 80lb braid hook link and a size 2:0 hook.  Baits to be used will be bacon grill, a strongly flavoured sausage from Morrison’s, and cheese, all three known to work on their day.
Normal practice has been to fish the margins and this time was no different, the baits being placed rather than cast since they would lie well within a rod length from the bank.  The bites can be quite delicate and with all the other species having a nibble at the bait it did mean there were a lot of missed strikes over the course of the session.  A lot were missed, but eventually one was hit and after a nice fight I brought in a specimen that would prove to be 18lb-10oz in weight not the monster I was hoping for but welcome never the less.  I had two other chances but one of those landed landed was definitely foul hooked, and the other came off the hook after a short powerful run, again probably foul hooked. 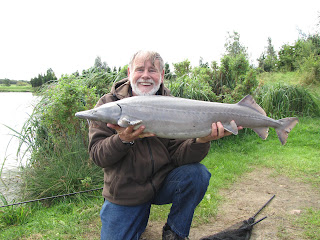 Nice sturgeon for this trip.

That was it for the day, not a big fish but I live in hope and I will definitely be back for another try.