I’ve been waiting for some weeks for the day to arrive and finally on Tuesday it did, and along with Merv and Neil Wiggall I set out on a pre-arranged trip after monster fish.  Some time ago I had been told of a water that held carp to 40lb plus, and cats along with sturgeon to very large sizes.   I just had to get the details and book up for a try, now we were on our way for a 48 hours session.  With the three of us in the front seats of the van it was a tight squeeze, but I had intended to arrive about 10:30am and almost to the minute it worked out that way.  We all decided to have a look around the place before beginning to set up tackle, after all we had time enough to land what we all hoped for.  Whilst I would be happy to land a giant carp or catfish my prime aim was a big sturgeon, I’m stuck on 29 over the 20lb mark but it is a 60lb plus that I hope for and this venue to meet that target. 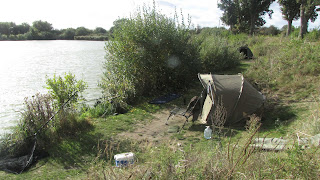 Not sure why anglers look around lakes since without a method to check the depths it is just a flat sheet of water: but we all do it and in this case we did finally choose swims more for the short walk from the car than any other reason.  Once the choice had been made we were all soon sitting with rods in place and baits positioned in our chosen water section.  Bearing in mind the size of fish I hoped to meet I had increased my gear correspondingly.  My rods were 1oz-4oz Uptide versions along with the old Shimano 6500 baitrunner series, this being a set up I used in Spain and Egypt for the large target fish of that time.  The main line was 80lb Fireline braid and the hook-link was made from 100lb Kevlar going to a size 2:0 Owner Cutting Point hook, this was serious freshwater tackle for whatever took the bait.  With slight variations of strength and make, the other two anglers had similar heavy gear, we came loaded for bear and we could only hope they were hungry. 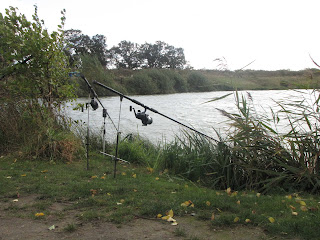 Just wait for the Roll-Over indicator to move.


A variety of baits would be in use, all of which had succeeded in taking sturgeon from one or another of the three previous waters we had caught these powerhouse specimens from.   Mackerel and herring for fillets, salmon off cuts that accounted for numerous of our specimens were added along with lamprey and sardine, various tinned meats both natural and flavoured, over the 48hrs all would be tried and some would succeed.


The first ninety minutes of my session gave me great hope of success when on three different occasions I had line bites one of which was convincing enough for me to strike.  Along with crucians, the sturgeon must be the most prone of our coarse fish to give line bites.  The crucians will twitch and move your float all over the place and some of the movements must be struck only to either totally miss or often resulting in a foul hooking situation.  Sturgeon seem to be constantly on the move and with those big pelvic fins sticking out either side of a wide body they are just made to catch the line as they go past.  Your line streams off the reel and the resulting strike sometimes hits into a fairly hooked fish, but just as often it is either missed or if hit the fish comes off after a struggle of various lengths of time.  Now I always work on the basic premise that if I lose a fish that comes off the hook during the fight, then it was most probably foul hooked in the first place so it does not matter since I would not count it in my list.


Not long after this lost fish to me, Mervyn had a similar event where a fish took line off a very tight clutch and almost had him in the lake.   It came off probably some hundred yards away leaving a very unhappy lad, but never the less very excited after the most powerful run from a fish of his 60 year plus angling career.  It was around 3:30 when a call from Neil finally got us to see one of these monsters and by god it was big.  Time and again he got it to the waiting 60inch landing net only to see it power off into the middle of the lake yet again.  As with these things you either eventually land it or lose it and fortunately, he landed it as Merv slipped the net under it only to get absolutely drowned as it trashed about and made a mini tidal wave that encompassed his boots and lower legs. 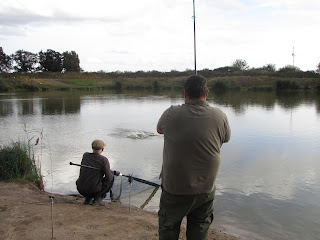 The waiting net just needs a fish to be complete.

It took all three of us to safely see it onto the waiting unhooking mat.  Then Merv just lay over it whist we sorted out weigh sling and scales ready for the event of seeing just how big this was.  The sling was zeroed against the Ruben Heaton scales hanging on a suitable tripod, and then with the fish safely in it we got it onto the hook where the needle swung round to 85lb.   A new pb for Neil and the biggest fish Merv has seen in the flesh, terrific and now we wanted one! 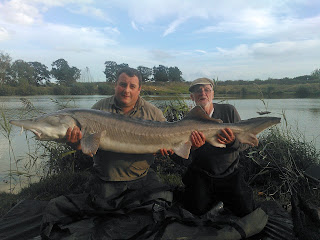 Dark seemed to come quite quickly and by 6:30 we were on torches in a very black night, over the coming hours I had lots of line bites in the form of a short series of bleeps to full blooded runs, but no fish hooked and the Wednesday dawned with all three of still waiting for the next action.  Throughout Tuesday there had been very little action from fish breaking the surface, but now there were carp leaping at regular intervals and other signs of fish movement all over the place.  They might have been showing us they were there but nothing took the baits, and the first 24hrs of our trip passed without another fish coming to the net.  The time was passed in watching the wild life around the lake and the fighter planes passing overhead, difficult to photograph but I had plenty of time and a digital camera take as many failed tries as you need, just delete the ones that miss. 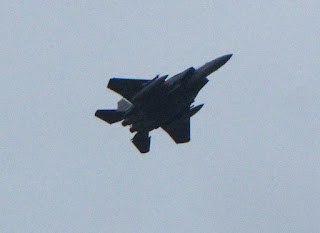 Darkness came yet again and as I watched the space-station pass overhead, bright against the very dark background, I wondered if perhaps we would only get that one chance.  It was around 11:00pm when the answer came, and a shout form Merv of ‘I’m in’ brought both Neil and me to his aid as he again struggled against an unseen monster.  A different lever of power than his previous encounter he soon had this under control but even so it was a little time before it was safely in the net and he could celebrate a new pb fish.  Again the needle on the scales went round to very pleasing figures and Merv had a 66lb sturgeon under his belt and we still had some hours to go before we would need to leave. 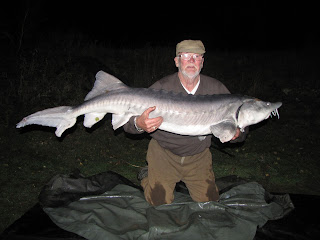 A fish like that gets the adrenalin going and I was still well awake at 1:00am when the line on my mackerel baited rod went into overdrive and my strike went home.  No need to call as both the other angers were also still awake and heard the commotion as the fish erupted on the water’s surface following my strike.  I’ve had lots of bigger fish while fishing abroad, but this was England and so much more satisfying for that.  A great fight and several minutes later he slipped into the waiting net and I could see he was fairly hooked in the mouth as were both the previous two fish.  Being my capture and in the dark I thought this was going to be bigger than Neil’s 85lb specimen, but the scales told the lie of that thought when it showed 75.5lb, my largest English fish by a considerable margin. 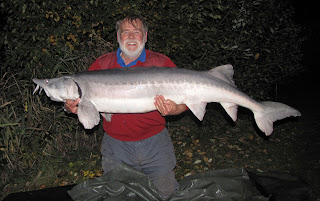 That was to be the last hooked fish of the trip although we all had other line indications.  It was also noticeable the on the Thursday the surface of the lake again went dead, and when we packed up at 4.00pm the only question to be answered was when do we return since we definitely will!