Fishing in the North

I went up to Stockport to give a talk at a Barbel Society meet last Wednesday.   Very well attended with perhaps 70+ anglers who gave a warm reception.   After the talk I spoke at length to the organiser Gerry Gleeson about the local River Goyt – being the barbel record holder for that river it seemed a good move.  He was very positive and it was arranged that I would return on the Saturday to have a try at a double figure barbel off that river, a long shot but I like the challenge.
On the Thursday and Friday I had already arranged with John Monaghan to visit his local River Ribble at Preston for the two days.  Again he is the river record holder so I was in good company.  The stretch of river I fished was the same as on my previous trip but this time from the opposite bank.  There would appear to be lots of silver fish in the stretch at the moment, and the float fishermen were out in force and catching well.  Small chub, roach and bream were coming to the net in a frequency I’ve not seen for a long time. 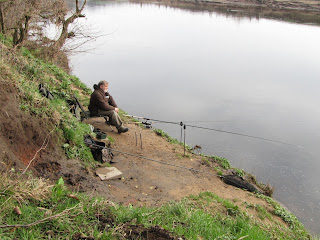 My swim for the first day.

Meanwhile my two legered offering of boilie and pellet were getting plenty of knocks off these small fish, but I had deliberately left a longer hair to avoid hooking them and it worked most of the time.  The chub I did hook would have been perfect as a pike bait to try for the big pike that must surely be in the area with so much fodder fish available.  With just one barbel hooked and lost to the stony river bed, despite fishing a little way into dark it were quite disappointing and the next day I moved areas to a swim perhaps a Kilometre upstream.  Deeper water and this time the swim was under my bank – the previous day the deeper channel had been on the far bank and that certainly helped cause the line to get trapped under a rock when playing the barbel.  Unfortunately the result was the same in that I did not land any barbel, this time I did not even get the chance to hook one. 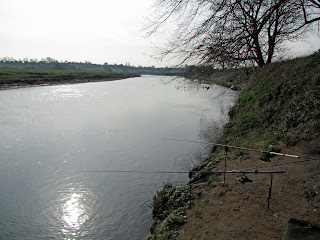 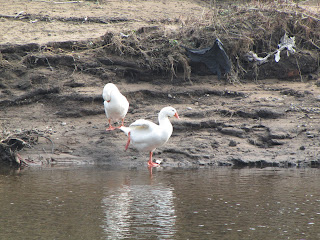 Going that 100 odd miles north did bring in a different bird life scene, a flock of oyster catchers were flying back and forth up the river with their piping call echoing all the time, occasionally the plaintive call of a curlew flying overhead would break the monotony of no bites off the fish – it is all part of being on the bankside.  A dozen or more snow geese settled on a sandy bar just up from my swim, just the little bit out of the ordinary thing that happens on the southern rivers.
That was it then, two days on the river for a number of small chub the best of which would have struggled to make two pound, I hoped for better the next day but feared the worse as the barbel fishing seemed in the dumps.  Reports off anglers on both rivers appeared to be getting the same lack of fish so I could only hope.
Dawn on Saturday saw me setting up on one of the weirs on the River Goyt, my first ever sight of that river and I would love to catch a barbel of any size, but of course the double was the target.  As with all dreams we often are met with failure and this was to prove to be such a day.  More chub were caught though of a slightly larger size the best about three pounds came to the net, but no barbel.  The day was saved by a sight I would have travelled for in its own right – a pair of dippers building a nest in under the far edge of the weir as it tumbled over the edge of the sill and left a gap at the side.  All morning these little birds, the size of a kingfisher would be travelling back and forth with material for the nest that was out of sight behind the waterfall.    As the weir water reached the bottom end of the pool it became shallower becoming a long glide perhaps only inches deep, this then went over a ridge and broken water could be seen as it tumbled along on its journey downstream.  I watched as the dippers would fly over this glide and suddenly drop out of sight into the water, not to be seen again as they worked underwater into the broken water area below.  I’ve seen on TV but now in real life it is something different again, and a memory to keep in the vaults of the mind. 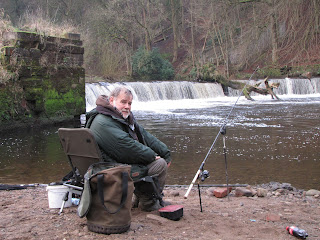 My swim on the River Goyt. 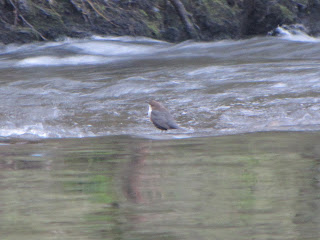 The dipper at the edge of the ripple

Plans are already in place to return to both rivers next season and the challenge will make the eventual success all the sweeter.
Posted by Travelling Man at Sunday, March 04, 2012