Dreams of perch and bream

Seems that I’ve been in a bit of a dull spell with more blank sessions than I would like over the last few weeks.  This situation continued with a blank for the bream for the two nights that I fished on the Colne Valley lake that I am currently fishing.  Of course I’ll be back this week for yet another try since big bream are never that easy.
This week the silver bream attempt on the local canal came up with the same failure to catch as the previous attempt, but this time there was no big common carp to ease the pain, again I’ll be going back to try once more until I succeed.
Finally I did get a result with my perch fishing on the local commercials – a specimen perch fell to my rod after a quite frustrating day.  I last visited this venue the previous spring and at that time the small silver fish beat any attempts to keep bait in the water for longer than a few minutes.  I had hope for better this year but they were still there though perhaps slightly less in number.  My worms and maggots were being devoured quite quickly, I persevered hoping for the best but it just would not happen.  Then using the second rod I put one of the smaller perch on as a live bait using a size 6 wide gap hook just through the lip.  This was presented on a light paternoster rig with two SSG shot to keep the sunken float under the surface whilst holding the bait just a little to stop it drifting all around the swim.  Great idea but it did not work on the day –maybe next time.
I had taken a lure rod along and throughout the day I would spend 15 or 20 minutes casting a small shad type lure in an attempt to get interest in that method, but again no joy.  In between this lure fishing I had continued to try with the maggot fished under a float and then mid afternoon I realised that the small fish had slowed down considerably.  Taking this as a good sign I changed the hook and put a half of a lob worm on as bait hoping that a big perch had perhaps caused the silver fish to move off.  After perhaps thirty minutes I got a possible answer as the float went down and the thump, thump on the rod top suggested a perch had taken the bait.  When the stripes came into view I could only hope that it would stay on the hook and it did.  At 3lb-4oz it is just short of being a real specimen perch but until one bigger comes along it will do! 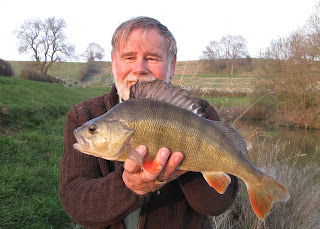