Barbel river and the end of the warm weather.

A bit slow on completed this blog as I have been quite busy on other things like the article for the Coarse Angling Today magazine, and a chapter for a proposed Tenchfishers Book.  The last week has been a mixed bag of perch fishing, with a dash of barbel chasing thrown in for good measure.  The water that seemed to offer the best chance of a 4lb perch last season seems to have lost its potential with the larger fish all apparently gone, this yet again reinforces the view I’ve often expressed of ‘make the best of it today since you don’t know what tomorrow may bring.’   Not sure what happened, but it seemed the fish were there in February [four known 4lb perch] but gone by the end of March.   So I’m back on the search trail again and a couple of trips in the week to a water that seems to have potential only produced two fair perch with maybe 1lb-8oz for the best one.  It will be a long winter so still plenty of time to find a water to concentrate on come next spring when they will reach peak weights.
When the forecast showed the colder weather coming into the area for the end of the week I decided to get one last trip to the Derwent for barbel.  I took a float rod along with me with a few lobworms to have a little try for the perch along the edge of the rushes, but that ended in failure as a hooked fish that would almost certainly have been a nice perch [the alternative could have been chub but it did not try to get into the rushes] threw the hook before I could get it to leave the river bed to enable me to get a look at what I had hooked.
I had taken hemp and casters along for the session and with this mix I laid a nice bed of feed in mid-river then fished casters over the top with a swimfeeder in play as well.  Lots of knocks and taps off small fish with a few of them hooked, but none of the larger fish showed.  As it got dark the temperature dropped a little, but it was still quite mild so I determined to stay on for a while.  An hour into dark I changed rigs to the open-ended feeders and 8mm pellets that have worked so well this season and I did get two barbel, one of 6lb plus and another of 10lb-7oz to give a fine ending to the day.  Will there be another chance before Xmas? – we wait and will see. 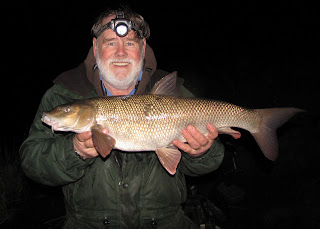 10lb-7oz on the last day of November.
That brings me up to date and still making plans for the next week though I’ve arranged a zander trip for Sunday, be interesting to see if that can work.
Posted by Travelling Man at Saturday, December 03, 2011