Autumn is officially defined by the met office as the months of September, October and November so with winter almost on us I cannot be too surprised that the fog and frosts have finally arrived.  At the start of the week I had decided to visit the zander lake in the hope of contacting one of the many double fish that seem to be being caught at present.  Curtis was up and ready at the 6:30am arranged pick-up time and we slowly made our way over the 40 odd miles through the patchy fog that was about.  Going along the motorway at 35-40 mph it seems amazing that these lads with x-ray eyes can flash past into quite thick fog at incredible speeds – accidents waiting to happen.
We set up our tackle and with a section of lamprey on one of the rods and a 4 inch roach on the other, with Curtis fishing the same I was reasonable confident that at the very least our offering would be acceptable to the zander, or even pike should they wish to make an appearance.  For most of the morning the fog hung about and although voices could be heard coming over the lake it was all a mystery as to who, or where, other anglers were placed.  Although the afternoon brightened up quite nicely, the fish refused to play and the bailiff suggested that only one 16lb pike had been caught on the complex, disappointing but that’s fishing.
Although it rained quite heavily over Monday night I thought the barbel fishing could suffer a double whammy.  One, the drop in temperatures, but more the case was that with the lack of floods the weed would move and make fishing quite a hit and miss affair.  Time for a bit of perch fishing so with tackle ready I set out for a local carp commercial that should offer the chance of a 3lb perch or even bigger.  Although I do use leger tactics for the perch, I prefer to float fish just so I can watch that red tip as it dips and slides away in response to a take.  My bait was the trusty lobworm and I intended to spray red maggots into the swim just to attract the silver fish along with the perch into the area.  I’ve found that on these commercials it can pay dividends to fish close into the side, it is noticeable that the match lads often do exactly the same.  This might be the side where you’re fishing, or the side of one of the islands that invariably are present, either seems to work that little bit better than open water. 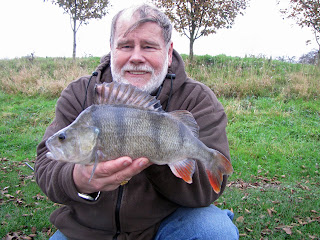 Arriving at midday I only had about 4hr or 5hr to fish, but the first perch came quite quickly to show they were present in the chosen swim.  I am not sure about putting perch back into the water where you are catching them, so to be on the safe side I walk them two swims away before returning them to their watery home.  Keep nets are banned unless in an organised match, not sure why that would be different, but it does stop that photo shot of a few nicely marked fish.  With nine perch from 8oz to 2lb-4oz caught in the remaining time before dusk I was well pleased, and a return trip is well on the cards for tomorrow - that big fish is just waiting to be caught. 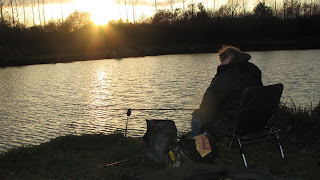 Sunset can be a good time for perch fishing

My book ‘Target set and achieved’ sales are going well and I would thank all who have sent for a copy for their confidence that my writings are worth reading.  With Xmas coming on quite quickly it might be an idea to give yourself a real treat with a leather bound copy of this book that I’m sure will prove to be an investment.  With just 40 individually numbered copies, bound in high quality goatskin in a shade of ‘antique burgundy’ to the very highest of standards I am well pleased with the finished article.  I recently saw a leather copy of Magic Moments sold at £350, this edition sold at just £125 in 2004.  I appreciate that at £175 this edition is more than many can afford in these trying times, hence the fact that there are copies left; but give me a call on 07980 394864 to ensure there is still one left for you and I’ll reserve it with your name against the sale. 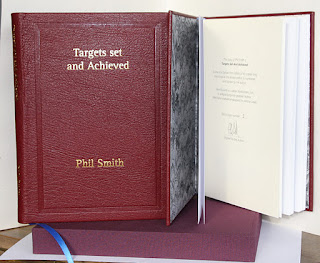 http://www.philsmithangler.co.uk/ for a standard edition.