Going towards the south of the country is always exciting, although there are good fishing areas around the midlands and north of the country, the southern lads have it made for specimen fishing.  I have three days planned in the company of John Found, two on the river Kennet, and one going to the roach pit in the search for a 2lb plus specimen.   For November the weather could not have been better and pulling into the car park on the Kennet venue just after dawn the temperature was around 11C, the other side of the coin was that the river was still extremely low as the odd bit off rain had had no effect at all. 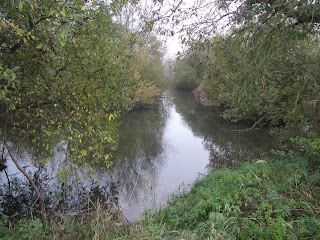 Today both John and I were to try a maggot approach and I had a good supply of both maggot and hemp to meet any eventuality, the amount being used depends a great deal on the response of the fish.  Once the swim had been decided I bait dropped ten droppers of maggot and six of hemp; then I went for a walk.  Generally when using maggot or caster as the main line of attack it is not to catch just one fish, rather the approach is to encourage the fish to get pre-occupied, and thereby allowing you to take a number of fish from the swim without disturbing the others present. 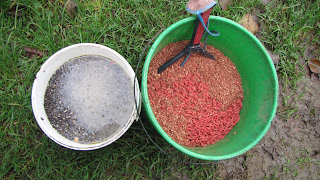 Just add water and fish for a perfect mix

The plan was perfect, but at the end of the day we retired from the river with just a small 4lb barbel falling to John’s attempt, I blanked!  It is not the first time I’ve seen the effort and time spent on the method fail, but then it will not be the last.  There seemed to be no reason for the lack of response as definitely there were fish in both swims, but that is what makes fishing unpredictable.
It was now Wednesday and the forecast was for an even warmer day and possibly a sight of the sun making an appearance.  The lake we were to fish has done roach to near, or even over 3lb, but my best is one of 2lb-4oz caught in the Spring, but not sure what to expect at this time of the year.  I suppose the roach will be at their normal good condition weights without spawn, so take 4oz-6oz off the spring weights where spawn is a factor and it would be a fair guess. 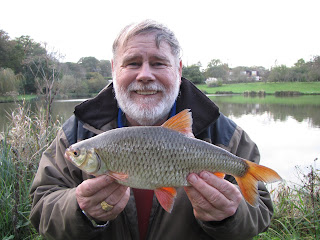 Although I would prefer to float fish for these silver gems we had found that the short hook link on a helicopter style rig was deadly and hence that was the method we would use.   I was first away with a fish of 1lb-10oz; a pleasing start and I commented to John that I would be quite happy if that stayed the best for the day.  Following a few smaller bits another big fish came and at 1lb-13oz it was getting close to that 2lb target we both had in mind.  Now I noticed John’s rod bent over in a nice battle curve, and following an exciting scrap he netted a fish that was to prove to be exactly 2lb on the digital scales. 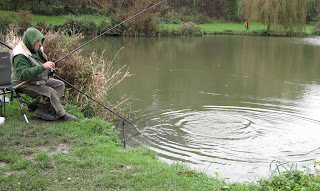 Heart stopping moments when a big fish is seen.

There are few fish that can match the look of a large pristine roach and we both mentioned it would be nice to meet up with that fish in the Spring.  I ended the day with four weighed roach, their weights being 1lb-8oz, 1lb-10oz and two at 1lb-13oz, but John took the honours with that 2lb specimen. 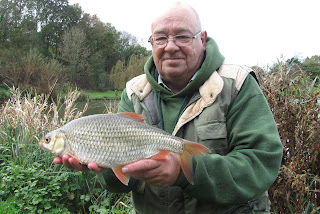 The best of the day at 2lb exactly.

Throughout the day a kingfisher played hide and seek just along the bank from my fishing position using a small willow as his cover.  I tried to get into a better position for the photo, but the slightest move away from of the small willow between us had him flying to a safer position. 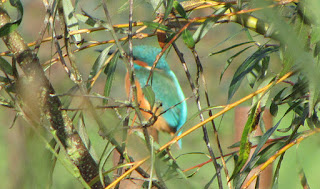 Thursday we were back on the Kennet not to be beaten.  Weather was still tremendous for early November but would the barbel play today, time would tell.  We were using casters this time and John soon had a fish of 7lb or so in the net to give us hope that they were feeding.  Quite quickly after that he added another barbel of 9lb-15oz-8drm, the digitals flashed between the two numbers to indicate the 8drm figure but they just would not settle on the 10lb mark. 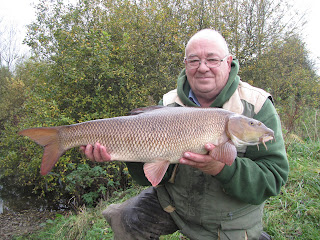 John with the first of his big 9's

Then with another fish of 6lb or so, he was beginning to leave me behind but then I got a barbel also in the 6lb range so at least I would not blank.  All the time I was gently introducing a mix of hemp and caster hoping the barbel would find it irresistible.  I went through a spell of perhaps 30 minutes where the rod top would slowly pull round then spring back again, a sure sign of barbel in the swim; it was only a matter of time.  Then at last I got the bite and following a very good scrap I landed what was clearly a big fish.  This time the scales hovered between 10lb and 10lb-1oz so I clearly had my hoped for Kennet double.  John went on to get yet another fish just short of the 10lb mark, it could have been a twin of the first barbel just short of that 10lb mark, but a careful check showed no hook marks so clearly a different fish to either of the other two. 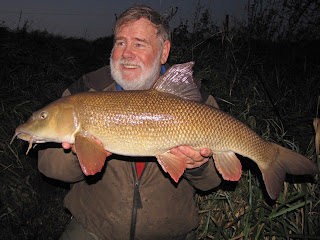 
I fished into dark and started packing up at 6:30pm just to avoid the traffic on the 100-mile trip home.  No indications in that extra time but I did get a clear run home following three different, but exciting days.  With slight variations I will be repeating the break next week, I'll let you know the result.
Posted by Travelling Man at Friday, November 11, 2011