Stories of River barbel, zander and sturgeon, success and failier.

It has been yet another interesting, but frustrating week in the search for specimen fish of different species.  The beginning of the week saw me take the trip to the River Severn in the continuing search for those monster zander that swim throughout the whole length of the river from Worcester to Tewksbury.  A nice, fine day, considering it was now the end of October, it was cool in the strong wind that was blowing but I managed to get down the bank out of its effects, and there I felt quite warm.  The river was still very low with the flow almost at a stop, a 1oz lead held way out towards the middle of the river without a problem.  With roach section on one rod, and a chunk of lamprey on the other, I knew at the very least the baits would be acceptable to any zander in the area.  That was probably true, but it was only the pike that found it and I retired a couple of hours after dark without sight of my target species.

Mid-week saw me on the way back up to the River Dove, it was slightly up from my last trip and the colour had certainly improved with just a tinge of chocolate that I felt should encourage the barbel to feed.  I bait dropped a few droppers of hemp and almost certainly I disturbed a fish, I felt it hit the line as I went to retrieve the dropper after one of the hemps loads had emptied.  Unfortunately that was the only sign of a fish that I, and others I spoke to had before I retired from the river about 11:00pm, better luck next time I hope.

On the Saturday I went to the Tenchfishers AGM, usually attendance at any of these agm’s is quite boring but this one went well.  Discussions on the forth-coming Tenchfishers book and a very interesting talk by Dai Gribble, this involved photographs of numerous very large fish and these in turn had my mind wandering  ‘could I catch that?’  A big bonus for me was that there seemed to be a very good call for copies of my book and probably a third of the sixty or more of the anglers present brought one – hope that continues. 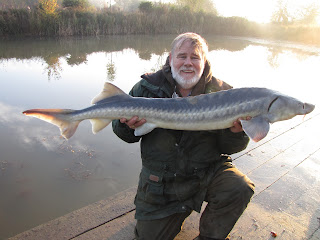 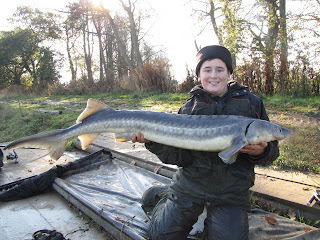 25lb-8oz for Curtis.
On the Sunday I was booked in for the last visit of the year to the sturgeon water I been trying this year.  I nearly got the photograph of the big one last time, but as reported in the blog at probably over 60lb it went through the landing net my friend was using as he went to lift it from the water, no photo and not weighed.  This trip saw both Curtis and I get our hooks into sturgeon of 25lb plus but it was almost dark when Simon, another friend warned that a fish he had hooked was heading towards our end of the lake with him in very little control.  As previously mentioned these sturgeon fight like no other English species, we may argue about their place in our waters but one cannot argue their fighting spirit.  When they get as big as this one eventually proved to be, then you really are in for a scrap where most of the time you come a poor second.  At 62lb-3oz it really was a monster but unfortunately it also proved to be foul-hooked in the pectoral fin and as Simon made the comment “Just 8 inches away from total success.” 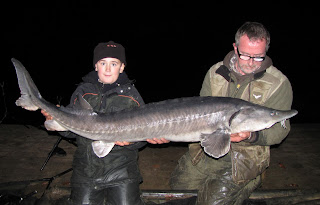 Just a note to end in order to remind you that the 'Targets set and Achieved' book is available and there are still a couple of leather copies waiting to be grabbed with both hands, details on the web page.  http://www.philsmithangler.co.uk/
Posted by Travelling Man at Monday, November 07, 2011