It has been an interesting week, three afternoon/ evening sessions on the canal after the elusive zander that went a long way to prove they are still elusive.  Nine zander sessions spread over different lake, river and canal venues has resulted in just three fish, one of 10lb-3oz from the lakes, one of 5lb from the canals, and one maybe 5lb from the river.  I am definitely not setting the zander world alight with my results. 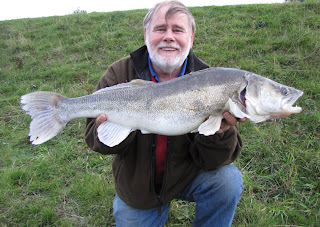 Best zander so far this season.

Almost everybody I've spoken to with reference to fishing the River Severn for zander has related how the river is alive with them.  Drop a bait in, and a zander will attach itself in no time, after all my years experience I should have known better than to accept these statements at face value, but I did get good information on a recent evenings slide show.
Arranged by the Birmingham region of the PAC, it was a talk by Dilip Sarker on the zander in the River Severn, well I had to go to that didn’t I?   Over the course of a couple of hours Dilip showed the development of the Severn as a premier zander venue.  He also gave ample evidence of the success both he, and a small group of friends, have achieved with fish to over 20lb being taken.  The other side of the equation was that he also identified the amount of time and effort that went into getting those results, definitely not easy.  Find a feeding pack of them and you can catch but that can take time.  I’m sure that this talk will appear elsewhere on the circuit and I would recommend you make the attempt to see it.
Of course I could not let a week go by without a visit to the river for barbel.  With all that rain on Thursday I thought the rivers would respond with a raise in levels and colour, so off I went to the Dove only to find it still at the bottom end of its summer level.  We drastically need rain and lots of it!   I fished from 2:00pm through to 10:30pm and my result was just one dropped fish.  It was still light when for the second time my rod tip on the pellet bait gave a tap-tap-tap type of bite.  I had struck and missed the first occurrence, but follow this strike a powerful fish shot downstream taking line off the clutch.  It had only gone about 10yds-15yds when the hook came free and I was left to ponder what had happened.  My conclusion was that the fish was browsing over the loose feed from the swim-feeder and my strike had resulted in a foul-hooked fish.  Most times I feel that if the hook comes free early on in the fight with any fish it is probable that it was not fairly hooked, then as soon as the line angle to the hook-hold allows, it will come free.  Not very scientific but it allows me to rationalise the loss of a potentially good fish!
Posted by Travelling Man at Saturday, October 29, 2011