Too hot for fishing!

With the temperatures reaching record heights of near 30C it was quite comfortable sitting in the Conference Centre at Kettering.  It was the Pike Angler's Club  annual get-together, and hundreds of pike lovers decended on the venue in their droves.  With the air conditioning going at full blast this definately beat being on the bank somewhere, melting in that blazing sun.  For those that did attend there were plenty of attractions, both in the form of talks being given by prominant pike anglers, and a large array of stalls selling everything, this was of course including myself trying to convince a pike angler that there are other worthwhile fish out there.  Fortunately there are still enough all round fishermen to make the day a success, I think that most of those attending will have found something to please them and they will leave following a great day. 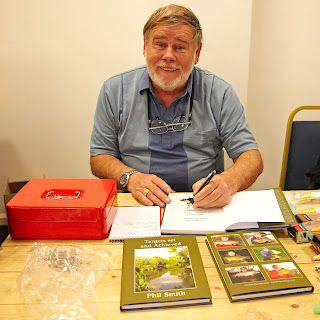 Thanks to Tom Balaam for the shot of me signing his book.

I also took the chance to get a bit of tackle, and Monday evening I will be trying it out the those River Severn zander followed by two days boat fishing on Chew Valley Res next week-end. - I'll let you know if it works.